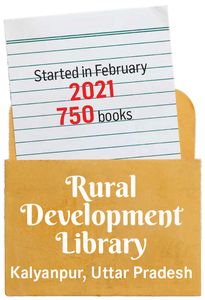 The idea for the Rural Development Library came to Arun Kumar when he visited a library for the first time. Now, his library is housed in a room of his ancestral home in Kalyanpur village of Mallawan block, Hardoi district, Uttar Pradesh.

“We did not know the relevance of a library in our village, because we never saw one. I studied in Delhi University, where I [first used a] library,” says Arun, who is professor of British imperial, colonial and postcolonial history at the University of Nottingham, United Kingdom. “I saw a gap between me, who had just got access to limited textbooks, and my classmates, who were well-versed in literature. There was a temporal gap between village children and urban schoolchildren. We thought that a library could bridge that gap by giving them access to quality literature, standard textbooks and free books.”

Arun says his role is limited to getting the books that library in-charge Suneel Kumar asks for. For Suneel, a library is crucial to building a sense of community. “When children come here and read together, they form a bond that is stronger than any caste or other division,” says Suneel, who is preparing to become a teacher.

The Rural Development Library is modelled on the district’s first community library at Bansa village, some 17km away. It is open from 2:30pm to 6pm (after school hours). In addition to fiction and subject-specific books, it has posters on issues like domestic violence and the right to marry. Like the library in Bansa, it aspires to have a student council, educational sessions and activities in the near future.

Among Arun’s favourite memories is one of an ageing carpenter, who had made cots in his home, coming to read the Ramayan at the library.

Talks are on with the village headman to shift the library to the Panchayat Bhawan, says Suneel, so that the challenge of space could be overcome. He adds that there has never been a need to call for reminders to return loaned books. “This is everyone’s library,” he says, “and everyone’s responsibility.”