Ripples of the ruling

With the Babri judgement, BJP has fulfilled much of all it had set out to do 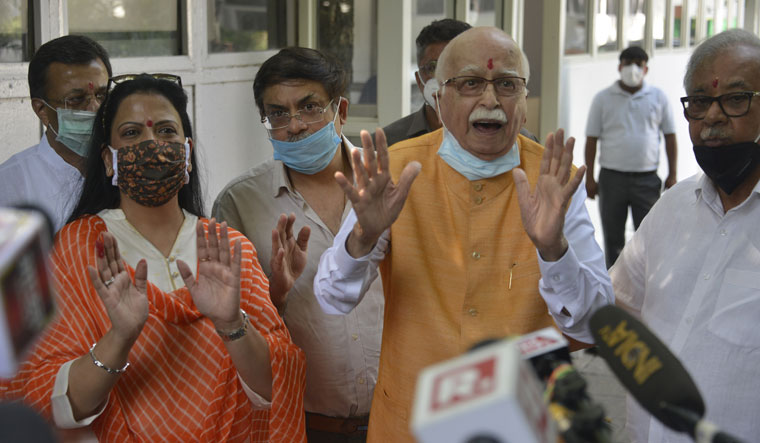 The wait ends: L.K. Advani with daughter Pratibha at his house in Delhi on September 30 | Arvind Jain

A few months after the BJP’s loss in the 2004 general elections, L.K. Advani became party president for the third time and explained the reasons behind the defeat in his address. “We assumed a direct correlation between good governance and the electoral outcome. We were not entirely correct,” said the 77-year-old leader, referring to the Atal Bihari Vajpayee government’s India Shining campaign. “Unfortunately, good governance in a country as large and diverse as India does not generate a uniform effect.” He then came to the missing ingredient from the BJP’s messaging. “In BJP’s voyage from the fringe to the centre of the political stage, we aroused many expectations, some extremely emotive,” he said. “We were unable to fulfil some of these. The construction of a grand temple in Ayodhya was one such issue.”

That was Advani’s call for a return to hindutva as an emotive issue, but it was something that even he did not push hard for. In an apparent bid for an image makeover, a few months later, he termed the demolition of Babri Masjid as the saddest day of his life. This left the BJP cadre confused till Narendra Modi rose to the top in 2014. Modi gave hope to the Hindu voters that he could fulfil their wish for a temple. As the prime minister laid the foundation of the Ram temple on August 5, Advani was missing from the ceremony.

On September 30, 56 days after the ceremony, a special CBI court acquitted all accused in the conspiracy to demolish the mosque. The CBI charge sheet of October 1993 named 48 persons including Advani, M.M. Joshi, Uma Bharti, Kalyan Singh and Vinay Katiyar; only 32 of them are alive today.

“The judgement vindicates my personal and the BJP’s belief and commitment towards the Ram Janmabhoomi movement,” said Advani, 92, after the acquittal. The BJP leaders were accused by many eye-witnesses of encouraging kar sevaks to bring down the mosque. But the court said the evidence produced by the investigating agency was not conclusive.

Advani was the prime mover of the Ram temple movement as he brought the issue to the fore with his Rath Yatra. That was 30 years ago, on September 30, 1990, during his first term as party president. The original charioteer of the yatra may have faded from the political scene, but the impact of his initiative has had a lasting impact on the country’s polity and national consciousness. 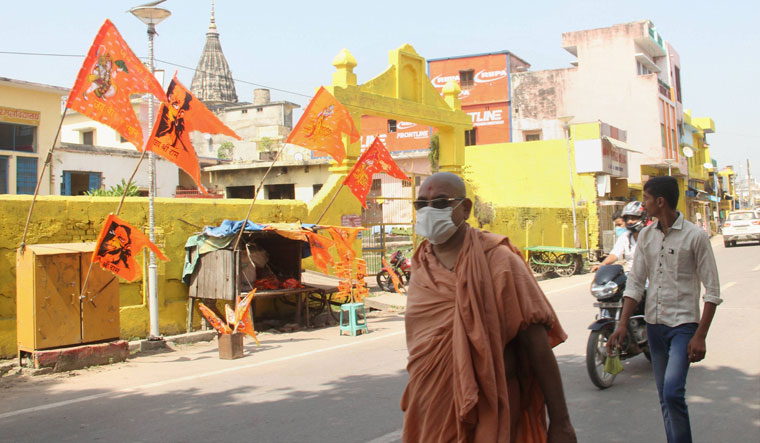 Promises kept: Ayodhya on the day of the Babri case verdict. Modi has delivered on the BJP’s core issues, be it temple construction or removal of Article 370 | PTI

During the BJP rule under Vajpayee, the cause of hindutva was overtaken by the issue of nuclear tests and the Kargil war. The national security issues injected nationalism in large swathes of the population. The 10 years of the UPA government shifted the focus to development and rights-based policy. With Modi’s arrival as an unabashed champion of muscular nationalism, hindutva was back in currency, but with a stronger focus on national security, which was pushed as necessary to save cultural values. It made Modi the biggest beneficiary of the hindutva movement. And, he has delivered on the BJP’s core issues, be it the temple construction or the abrogation of Article 370.

The November 2019 Supreme Court verdict to hand over the land in Ayodhya to the Hindu community and the recent CBI court verdict will bring into focus the aspirations of the Hindu majority. All parties, even those opposed to the BJP, have become conscious of the sentiments of the community. Even during the 28 years the court took to decide the matter, no political party pushed for a resolution, given how emotive the issue was.

“The conspiracy theory was the handiwork of the then government on the insistence of left-leaning historians,” said BJP’s Rajya Sabha MP Rakesh Sinha. “[The demolition] was not premeditated. The other objective of the episode was to revitalise and legitimise the appeasement theory. There was an attempt to compare the temple movement with violent agitations across the world that were anti-minority. Moreover, it was an attempt to put in the dock the main icons of the hindutva movement by presenting them as majoritarian. The [Ram temple movement] was liberating for the Hindu from the yoke imposed colonially and the Nehruvian definition of secularism.”

The Vishva Hindu Parishad, one of the main drivers of the temple agitation, reacted favourably to the judgment. “The Supreme Court judgment of November 2019 unanimously settled that the subject land in Ayodhya does belong to Ram Lalla,” said VHP working president Alok Kumar. “[The latest] judgment has busted the conspiracy theory. It is time to eschew politics, shed prejudices and instead of looking into the past, look forward to work together for the unity and progress of our country.”

Within the hindutva ecosystem, the matter had reached happy fruition. There have been many hardline Hindu groups who demand that focus now shift to “liberation of temples in Kashi and Mathura, which were demolished to build mosques”. But even the BJP would not want strife on its hand when the most contentious issue has been resolved, and these temples do not hold same weight as the Ram temple.

The BJP is sticking to welcoming the court verdict for now. “The assembly was never declared unlawful by any authority, by any mode as prescribed in law,” said BJP general secretary Bhupender Yadav. “The organisers wanted to stop them (kar sevaks). But they were not allowed to go there. The court said the demolition happened in the spur of the moment. The truth has finally prevailed.”

The judgments and the start of the temple construction will certainly be trumpeted by the BJP during upcoming election campaigns. The party hopes that the completion of the temple before the 2024 Lok Sabha elections will help create a cultural renaissance.

This judgment frees BJP veterans of all charges. Party patriarchs Advani, Joshi and others who have been side lined in recent times will hope that history books will be kinder to them from now on.