Excerpts from The Song of the Cell 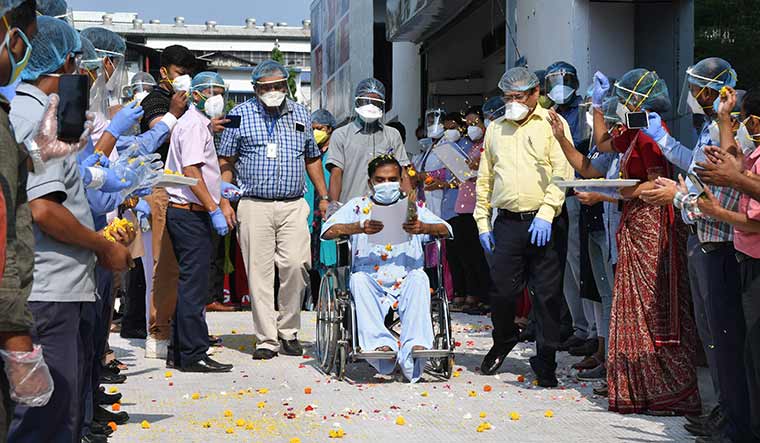 Positive negative: A Covid-19 patient being discharged from a Kolkata hospital | Salil Bera

When a diminutive microbe began to cross worlds, leaping from continent to continent, very little made sense. As Akiko Iwasaki, a virologist at Yale, told me, coronaviruses similar to SARS-COV2 had circulated through human populations for millennia, but none had caused this kind of devastation. Some cousin viruses, like SARS and MERS, were deadlier than COV2, but they had been rapidly contained. What feature of the interaction between SARS-COV2 and human cells enabled this virus to precipitate a global pandemic?

Two clues came from a medical report from a German clinic that, at first glance, hardly read ominously. In January 2020... a thirty-three-year-old man from Munich had a business meeting with a woman from Shanghai. A few days later, he fell ill, with fever, headache, and flu-like symptoms. He recuperated at home, and went back to work, holding meetings with several other colleagues. A fever, a headache―and a quick recovery. An everyday infection. A common case of a common cold.

A few days later, the hospital in Munich called the man in: the Shanghai woman had fallen ill on her flight back to China. She had tested positive for SARS-COV2. But here was the puzzle: she had had no symptoms when she had met him; she had seemed perfectly well. She had only fallen ill two days later. In short, she had transmitted the virus to the man while being presymptomatic. No one could have told her, or the exposed man, that she had been a carrier of the virus. No isolation or quarantine based on symptoms could have stopped the virus.

The mystery deepened when the man was tested. His symptoms had defervesced by then; he had returned to work, feeling perfectly well. But when the virus was measured in his sputum, he turned out to be a roiling cauldron of contagion: there were one hundred million infectious viral particles per millilitre of spit; just a few coughs might fill a room with a dense, invisible, deeply contagious fog. He, too, was transmitting virus while experiencing no discernible symptoms.

As the contact tracing continued, the second ominous feature of the virus emerged: the man had infected three other people. The “contagiousness” of the virus―a key factor in determining the course of the growth of an infection―was at least three. If one person can infect three, the growth of infections is necessarily exponential. Three, nine, twenty-seven, eighty-one. In twenty cycles, the number reaches 3,486,784,401―about half the population of the globe.

Asymptomatic/presymptomatic transmission. Exponential growth. The two critical ingredients in the recipe for a pandemic had already been established by that innocuous-seeming report. The third was soon to become apparent: unpredictable, mysterious deadliness. By then, who had not seen the grainy photograph, captured on a cell-phone camera, of the ophthalmologist from Wuhan who had dared to report the first cases? He is drenched in perspiration and gasping to breathe as he battles the pneumonia that will eventually kill him. As the infection spread, the world woke up to its macabre lethality: in Seattle, New York, Rome, London, and Madrid, the ICUs filled up and the body counts kept rising. And the questions arose just as furiously: What was the basis of presymptomatic infections? And how could a virus that caused relatively mild infections in some turn so lethal in others?

Why, you might ask, do the medical mysteries of the Covid-19 pandemic sit at the centre of a book on cell biology? Because cell biology sits at the centre of the medical mysteries. Everything we understood about cells and their interactions with each other―how the innate immune system responds to a pathogen; how immune cells communicate with each other; how a virus, growing so tenaciously inside a lung cell, can cause a presymptomatic infection without alerting other cells around it; how the cells of the gastrointestinal system may act as first responders to a pathogen―has to be rethought and dissected. The pandemic demands autopsies of many kinds, but an autopsy of our knowledge about cell biology is also necessary. I could not write this book without writing about Covid.

“There appears to be a fork in the road to immunity to Covid-19 that determines disease outcome,” Iwasaki told me. “If you mount a robust innate immune response during the early phase of infection [presumably via an intact type 1 interferon response], you control the virus and have a mild disease. If you don’t, you have uncontrolled virus replication in the lung that [...] fuels the fire of inflammation leading to severe disease.” Iwasaki used a particularly vivid phrase to describe this kind of hyperactive, dysfunctional inflammation: she called it “immunological misfiring.”

Why, or how, does the virus cause “immunological misfiring”? We don’t know. How does it hijack the cell’s interferon response? We have a few hints, but no definitive answer. Is it the timing of the response―the impairment of early phase, followed by hyperactivity of the late phase, the main problem? We don’t know. What about the role of T cells that detect bits of viral protein in infected cells? Could they provide some protection against the severity of viral infection? Some evidence suggests that T cell immunity can dampen the severity of infection, but other studies don’t support the degree of protection. We don’t know. Why does the virus cause more severe disease in men than in women? Again, there are hypothetical answers, but we lack definitive ones. Why do some people generate potent neutralizing antibodies after infection, while others don’t? Why do some suffer long-term consequences of the infection, including chronic fatigue, dizziness, “brain fog,” hair loss, and breathlessness, among a host of other symptoms? We don’t know.

Pandemics teach us about epidemiology. But they also teach us about epistemology: how we know what we know. SARS-COV2 has forced us to point our most powerful scientific flashlights on the immune system, resulting in arguably the most intense scrutiny that this community of cells, and the signals that move between them, has ever been subject to. But perhaps what we think we understand about SARS-COV2 is limited to what we already know about the immune system―i.e., the known knowns. We cannot know the unknown unknowns.

And perhaps the pandemic has pointed to another gap in our understanding: perhaps other viruses, like SARS-COV2, have unexpected ways of contorting the cells of the immune system that result in their pathogenicity, and we’ve just ignored these deeper explanations (indeed, we know of such mechanisms in viruses such as cytomegalovirus, or Epstein-Barr virus). The story we’ve told ourselves about why SARS-COV2 is so devious at hijacking our immune systems is, perhaps, a totally incomplete story. Our understanding of the true complexities of the immune system has been partially shoved back into its black box.

Science hunts for truths. There’s a haunting image in one of Zadie Smith’s essays that involves a cartoon of Charles Dickens surrounded by all the characters that he’s invented: tubby Mr. Pickwick in an ill-fitting waistcoat, adventurous David Copperfield in a top hat, bedraggled and innocent Little Nell.

Smith is writing about authors―in particular, about the out-of-body, in-another-mind experience that a fiction writer feels when she fully inhabits the mind, body, and world of a character that she’s created. That familiarity, or intimacy, feels like a “truth.” “Dickens didn’t look worried or ashamed,” Smith writes of the cartoon. “Didn’t appear to suspect he might be schizophrenic or in some other way pathological. He had a name for his condition: novelist.”

Imagine another character now, except surrounded by half-ghosts. Some of these “characters”―like type I interferon, the toll-like receptor, or the neutrophil―are mostly visible, except they exist in the half-light of visibility. We think we know and understand them, but we don’t, really. Some only cast shadows. Some are completely invisible. Some mislead us about their identities. And there are others around us whose presence we cannot even sense. We haven’t even met them, or named them, yet.

I, too, have a name for this condition: scientist. We look, we create, we imagine―but find only incomplete explanations for phenomena, even phenomena we may have (partially) discovered through our own work. We cannot inhabit their minds.

Covid exposed the humility that is required to cohabitate with these characters surrounding us. We are like Dickens, except encircled by shadows, ghosts, and liars. As one physician told me: “We don’t even know what we don’t know.”

There’s an alternative story―a triumphalist narrative―that can also be told about the pandemic. It goes this way: immunologists and virologists, building on decades of investigation into the fundamentals of cell biology and immunity, developed vaccines against SARS-COV2 in record time―some less than a year after the man from Wuhan had entered the Seattle clinic. Many of these vaccines functioned with entirely new methods of eliciting immunity―an altered chemical form of mRNA, for instance―again, using decades of knowledge of how immune cells detect foreign proteins, and how they might stave off infections.

But triumphalism fails in the face of more than six million deaths. The pandemic energized immunology, but it also exposed gaping fissures in our understanding. It provided a necessary dose of humility. I cannot think of a scientific moment that has revealed such deep and fundamental shortcomings in our knowledge of the biology of a system that we had thought we knew. We have learned so much. We have so much left to learn.

Edited excerpts from ‘The Song of the Cell’ by Siddhartha Mukherjee with permission from Penguin Random House India. Portions of this article appeared in the scientific journal Cell.