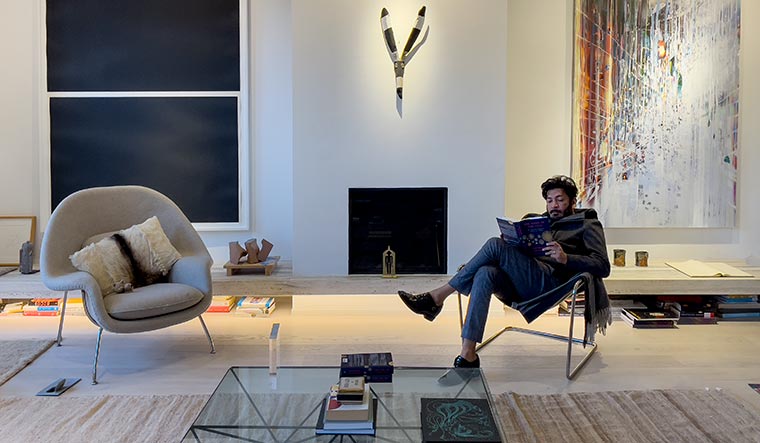 At peace: Mukherjee at his New York home.

His week begins with blood. Every Monday, Dr Siddhartha Mukherjee arrives early at his Columbia University lab to stare through the microscope at slides of red. Waiting very much in Shakespearean fashion for his patient’s blood to speak to him.

We speak on a Thursday. Mukherjee is in his loft in New York, making a sandwich and promoting his new book The Song of The Cell: An Exploration of Medicine and The New Human. It is his fourth book, the earlier ones being The Emperor of All Maladies: A Biography of Cancer (which won him a Pulitzer), The Laws of Medicine: Field Notes from an Uncertain Science and The Gene: An Intimate History. Its arrival in stores is very much a worldwide publishing event.

The next two months are big for Mukherjee, for his various identities of oncologist, scientist, writer and now entrepreneur. Book aside, in December, he flies to Bengaluru to assess the results of a CAR (chimeric antigen receptor) T cell trial for cancer. His laboratory, which has a reputation for cancer research, is responsible for starting one of India’s first clinical trials of T cell therapy. A T cell is a kind of white blood cell. “A CAR T cell is a T cell that has been weaponised against cancer,” he says. “It is a process that can be highly effective in curing patients, but it is also very dangerous.”

Immuneel Therapeutics, the Bengaluru-based company that Mukherjee and Biocon chief Kiran Mazumdar Shaw started, is working towards a treatment that will cost far less than treatments in the US. It has recently raised $15 million. IIT Bombay and Tata Memorial are also doing similar trials; theirs is in phase one, Immuneel is in phase two.

The Song of The Cell, like his other works, has the sweep of an epic and the pulsating urgency of a thriller. “All my books are personal,” he says. “I blend in memoir, history, personal history, deep history, the individual histories of my patients, and it all goes together. It is almost as if you enter the landscape of my mind.”

This is perhaps at the heart of what makes him a literary phenomenon. His talent lies beyond his ability to turn cells and genes into keep-you-up-at-night-thrillers. Or his ability to demystify jargon, very much like the imp who spins straw into gold in the fairytale Rumpelstiltskin. 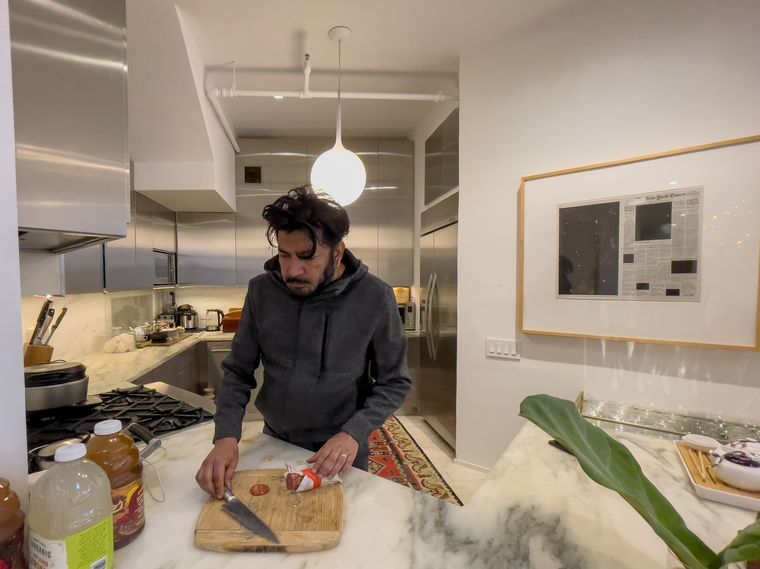 Grabbing a bite: Mukherjee makes a sandwich at his New York home.

In The Song of The Cell, he talks about grappling with his own unravelling. Depression. “In my case, it was triggered by a variety of things that were going on in my life, [including] my father’s death,” he says. His father was living with dementia and osteoarthritis, and had fallen a few times. The last of those led to bleeding inside his head. He died in 2018.

For Mukherjee, mental illness is personal. “Madness has been among the Mukherjees for generations,” he wrote in The Gene. He writes about his father’s brothers, Rajesh and Jagu, who suffered from various “unravellings of the mind”. And also his father’s fear of accepting the diagnosis of mental illness, as it loaded the dice of probability against him.

Mukherjee describes osteoarthritis as his “personal nemesis”. In 2021, he took it head on, hoping to defeat it with the sheer force of science. He and his colleagues have proposed a new hypothesis about the disease. It is not only the degeneration of the cartilage cells by wear and tear, as was widely believed, he says. “Our laboratory is known for discovering stem cells that sit in the skeleton and make bone and cartilage,” he says. “This is the site for osteoarthritis, one of the most common diseases.”

Cancer, of course, is personal, too. He lost two aunts to the disease, and he battles it professionally and intellectually, and also emotionally. The Song of The Cell begins with Sam P., a sportswriter friend who is diagnosed with cancer. “One rule of cancer that I have learnt is that it is like a fixated interrogator: It does not allow you to change subjects, even when you think you can,” he writes in The Song of The Cell.

In Mukherjee’s landscape, the quest to push the frontiers of science is propelled by wonder―he writes about the haunting image of a fly eaten alive by bacteria―and by what is the bedrock of medicine: Healing and empathy. “The losses pile up,” he says. “The only way you keep the flame of hope alive is to realise how much meaning those individuals had for those people who did not suffer loss.”

Mukherjee grapples with not just understanding disease, but also the consequences of living with it. The decay, the fear, the desperation and the fragility of life. In this quest, his vulnerability is his biggest strength.

In The Song of The Cell, we get a glimpse of Mukherjee as a young, overworked resident under pressure of a bloodbath; he talks of when he almost lost a patient. It is also an intimate history of his family, about depression, worry, loss, living with the pandemic, and surviving it.

Mukherjee’s story is universal as well as unique. Partition hangs over it like the smog in Delhi, the city he grew up in. His grandmother, a widow who lived with his parents in Safdarjung Enclave, had come from East Bengal with four boys. A pashmina shawl survived the journey. Its threads carry the memory of loss. It is this shawl that he wrapped his father in, as he got him out of the hospital knowing the fate that awaited him.

Sibeswar Mukherjee had very middle-class dreams for his son, ‘Boomba’. The father, who worked in Mitsubishi, credited all of his son’s achievements to the blessings of the Matri Mandir, a temple he helped build. Born in 1970, Mukherjee is a Rhodes scholar and a graduate of Stanford University, University of Oxford and Harvard Medical School. His SAT scores are bandied about with the kind of awe that only 1580/1600 can generate in a country obsessed with exams. 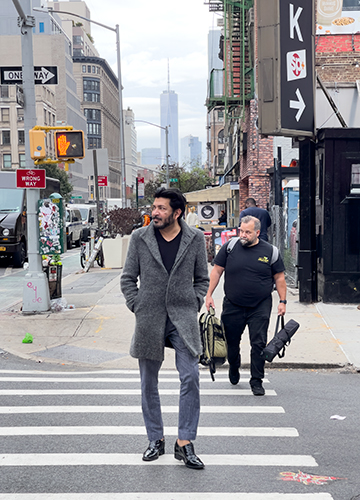 Going places: Mukherjee on the street outside his home.

But beyond the impressive academic record, or perhaps adding to it, Mukherjee is the perfect chele (boy in Bengali). He has learnt Hindustani classical music, and he cooks and paints―Stanford still displays one of his murals. His Twitter feed has advice to ‘MASK UP’, the uppercase underlining his exasperation, but it also has recipes like a Bengali version of the Punjabi rajma. He reads Chekhov, and has another Twitter thread on why he does.

In contrast to his books, where the reader gets a ringside view of the messiness of medicine, his life is very much Instagram worthy. His wife, Sarah Sze, is a sculptor, MacArthur Fellow and fellow overachiever. They are poster children of the new-age American story of possibility. Sze’s great-grandfather was the first Chinese student at Cornell University. Mukherjee was the first from his family to go to an Ivy League college.

They are very much a power couple in the vibrant New York cultural scene. They hold soirees at home, and writer Zadie Smith is a friend with whom Mukherjee sings and cooks up a storm. He has a band, which will perform at the Metropolitan Museum of Art in December or January. “It is not as if the fusion of Indian classical music and jazz has a giant audience like Harry Styles,” he says. “They are well attended, but they tend to be in a niche. I like it that way.”

Their romance, too, could be straight out of the series Modern Love. They met in 2002 at her show. He had been following her work. He invited himself over for dinner. Two years later, they were married. It was a registry wedding and he had stood in the middle of a bridge between Cambridge and Boston with a bunch of lilies. They had ten lesbians for company. Gay marriage had just been legalised in Massachusetts.

The myth of Mukherjee is as real as it is carefully crafted. He leaves nothing to chance. He is often on call for his patients, regardless of where he is. The story goes that he was once at a White House dinner, but came out to take a call for a patient who had crashed.

He takes his words seriously. The Emperor of All Maladies took five years. He has personally edited every excerpt of his book that has appeared.

The Song of The Cell comes at a time when the world has changed. “I feel older,” says Mukherjee. “[There has been] the death of a parent. Since The Emperor, my children have grown and there have been changing directions in my research life. Of course, [there is] the pandemic that continues [to give] new direction to my life as an entrepreneur, as someone who has started things and kicked off clinical trials. I feel all the vulnerabilities of age.”

Very few writers have won the publishing world with one book. And there have been other Indian doctor-writers before. Abraham Verghese and Atul Gawande, for instance. Gawande is part of President Joe Biden’s administration, and his Being Mortal became the go-to-book to understand the inner world of doctors. But Mukherjee stands apart in popularity. His audience, as one publisher puts it, is “insane”.

The weight of that mantle is heavy. The Gene made waves, but an extract in The New Yorker was criticised by some of his peers. Mukherjee would have taken it personally at a time when he had been placed on a pedestal by the publishing world. He did defend himself robustly, and did what he did best. He worked even harder. “I just do not believe in this idea of work-life balance,” he says. “I mean, for me, and to some extent for Sarah, work is life. Aside from the time that we spend with our children. I suppose my only hobby is gardening.”

He admits there are plants he has not been able to keep alive. They do die. And knowing Mukherjee, he mourns them a lot. But he also wants their loss to count. “When a plant dies, often you have to figure out why,” he says.

The answer to that question is often that the soil was not right. “And that goes right back to cancer,” he says, “because if you could figure out a way to make the soil inhospitable, you would be changing the paradigm of cancer.” 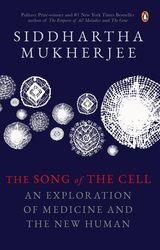 The Song of The Cell: An Exploration of Medicine and the New Human