The fire has seven tongues, and one of these is Kali, writes Bibek Debroy

The word Kali has roots that suggest not only dark, but also time, destiny

WHO IS KAALEE? I am not going to use Devanagari or diacritical marks. Therefore, initially, I have written Kali as Kaalee to indicate the correct pronunciation. Kali, also known as Kalika, means the dark one. The fire has seven tongues, and one of these is Kali.

Words have multiple meanings, and meanings depend on the text and context. Typically, when we hear the word Kali, we understand it as one of Devi’s manifestations, also referred to as Bhadrakali or Mahakali. Notice the word Kali has etymological roots that suggest not only dark, but also time, destiny, destruction, terror, fire and conflict.

One often hears the terms nigama and agama. Nigama texts are the Vedas, broadly speaking. There are prayers to Devi in nigama texts, too. The word agama means that which has progressively come down, through oral transmission, from guru to shishya. After all, knowledge was transmitted through this verbal route of parampara. Writing evolved later.

Plus, there is the Itihasa-Purana corpus, consisting of Itihasa (meaning the Ramayana and Mahabharata) and Puranas. These can’t be neatly classified as either nigama or agama. This corpus stands on its own. The word Purana simply means old or ancient, and there are 18 major Puranas, known as Mahapuranas. In addition, there are several Upapuranas, or minor Puranas.

Why is one interested in Kali? One may be interested in stories associated with Kali. If that is the intention, among Mahapuranas, I would suggest Markandeya Purana, Shiva Purana and Matsya Purana. To state the obvious, since these are independent texts, one shouldn’t expect complete consistency across them. Among Upapuranas, I would suggest Devi Bhagavata Purana and Kalika Purana.

As she advanced to fight, there were nine Durgas (Navadurgas) with her, and these were Kali, Katyayani, Ishani, Chamunda, Mundamardini, Bhadrakali, Bhadra, Tvarita and Vaishnavi. Later, Sati was born as Parvati, the daughter of Himalaya and Mena, and was married to Shiva again. One should be careful about using the word born. Devi is always present. She cannot be born. Periodically, she manifests herself.

Asked about Devi’s name as Himalaya and Mena’s daughter, most people will say Parvati. True, but Shiva Purana tells us her name was Kali or Kalika. Whenever Shiva or Devi fought against demons, Kali appeared, to help in that fight. Bhadrakali/Kali aided Shiva in his fight against Shankhachuda, and against Andhaka. Kali aided Devi in her fight against Shumbha and Nishumbha. When Devi fought against Chanda and Munda, Shumbha and Nishumbha’s generals, Kali appeared from the darkness of Devi’s rage and killed Chanda and Munda. Markandeya Purana tells us that.

Shumbha and Nishumbha had another terrible general named Raktabija. When a drop of his blood (rakta) fell on the ground, it acted like a seed (bija), and another asura appeared, just like him in valour and appearance. It was difficult to kill Raktabija. So Devi instructed Kali that as soon as she struck the demon, Kali should lick up the blood before it fell on the ground. That is how Raktabija was killed and that is how we often remember Kali, licking up blood.

For those not bothered too much about details of individual texts, our impressions about Kali are often formed on the basis of the Devi Mahatmya (greatness of Devi) section of Markandeya Purana. 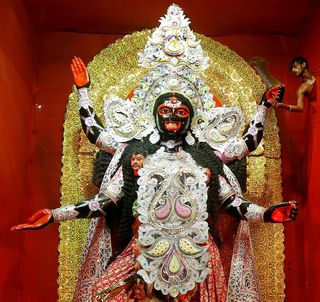 Born as Parvati, Devi performed tapasya, so as to be married to Shiva again. As part of that tapasya, she bathed in the Ganga. When she did this, Ambika (another one of Devi’s forms) emerged from the sheaths of her body. Since the word kosha means sheath, she came to be known as Koushiki. After Ambika emerged, the part that was left became dark and came to be known as Kalika. So says Markandeya Purana.

Shiva Purana has a slightly different take. In private, Shiva seemed to laugh at Kali’s dark complexion. As any wife would be, Kali was upset. She performed austerities, gave up her dark complexion and became Gauri, the fair one. It is these different takes that make the stories interesting.

There are stories and there is puja. There are geographical places known as Shakti Peethas, associated with parts of Sati’s dead body, when it was severed and the parts fell down. Devi assumes different names and forms there. I will skip the details. But the name Kali or Mahakali will generally figure in Kalanjara, Ujjayini, Kamakhya, Kalighat and Nalahati.

In addition, there is a place like Tarapith (in Birbhum district of West Bengal) which is not quite a Shakti Peetha but is associated with Kali’s worship. If one worships according to the tantra tradition, Devi will often be worshipped in the form of ten Mahavidyas (Dasha Mahavidyas). Their names are Kali, Tara, Tripurasundari, Bhuvaneshvari, Chhinnamasta, Bhairavi, Dhumavati, Bagalamukhi, Matangi and Kamala (Shodhashi). The details are given in tantra texts and in an Upapurana like Maha Bhagavata Purana.

In tantra, the iconography of ten Mahavidyas has mystical significance. Kali has many different forms. She will wear a garland of skulls and the number of skulls will be 51 or 108, both numbers with special mystical significance. As she stands on Shiva, whether her right foot is slightly forward, or the left one, indicates whether the devotee is following the right-handed (dakshinachara) or left-handed (vamachara) path of tantra. In iconography, it is easy to confuse the slightly dark Kali with the slightly blue Tara. (In Tarapith, it is actually Tara, not Kali.)

But there is a point about puja. Am I performing the worship myself or is a purohita performing it on my behalf? To take an example, there is a story about Rama worshipping Devi at the time of Navaratri, for victory against Ravana. But Rama didn’t perform the worship himself. He was the yajamana, the person on whose behalf the puja was being performed. Brahma was the purohita. Whether I am the yajamana or whether I am the purohita, certain rituals are prescribed and only a person who has taken diksha in the path of tantra is entitled to worship according to tantra.

Diksha means initiation. A person who has taken diksha in the path of the Vedas is entitled to worship according to the Vedas. So says Devi Bhagavata Purana. It is not a complete free-for-all. In passing, the word bali doesn’t necessarily mean an animal sacrifice. It means an offering, and taxes paid to a king are also known as bali. Puja that doesn’t follow the norms and is undertaken without bhakti is futile.