Filmmaker behind the Kaali poster does not intend to stop fighting 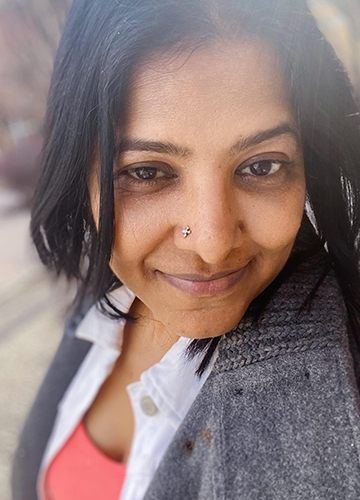 Leena Manimekalai waged a ferocious battle when the Central Board of Film Certification refused to clear her docudrama Sengadal in December 2010. She moved the film tribunal in Delhi, fought for months, and Sengadal (The Dead Sea) was released in 2011. It created a buzz at film festivals across the country, and was chosen for the Indian Panorama section at the International Film Festival of India and the international competition section at the MAMI (Mumbai Academy of the Moving Image) festival. Maadathy (The Unfairy Tale), her first pure fiction feature, had a spectacular world premiere at Busan International Film Festival (it is now streaming in Mubi). It also was initially refused certification by CBFC and subsequently got cleared by Tribunal over a legal battle in 2019.

Now the fight is over a poster. Manimekalai’s new documentary Kaali shows a woman, dressed as the goddess, smoking, with an LGBTQIA+ flag behind her. There was outrage on social media, and the police registered multiple cases. A lookout notice was issued.

Kaali was part of a nationwide academic project done on Canadian Multiculturalism hosted by Toronto Metropolitan University and exhibited at Aga Khan Museum on July 2. But, after the Indian High Commission in Ottawa said that it had received complaints from Hindu leaders in India, the Toronto Metropolitan University and the Aga Khan Museum “regretted” hosting and exhibiting Kaali. Manimekalai is fighting furiously again.

Born in a remote village called Maharajapuram in Tamil Nadu, she drew inspiration from the wild rivers flowing down the Western Ghats, the heroic village deities, and the politics of her father and grandparents.

When her father, Dr Raghupathy, a politically active Tamil Professor, suddenly died while she was in her Engineering college, she went to Chennai with her father’s thesis on filmmaker P. Bharathiraja. Raghupathy had wanted the filmmaker to write the foreword to his book.She then became Bharathiraja’s assistant.

Manimekalai later found a job as a probation engineer in Bengaluru, in an IT firm. But cinema did not leave her. She made her first documentary, Mathamma, in 2003. It was about the practice of offering little girls to deities in temples in the Arakkonam region of Tamil Nadu. It found some success, and Manimekalai worked to improve her skills; she accepted several cinema jobs that came her way, from editing to sound mixing.

Through her movies, she stood with the marginalised, the oppressed, the voiceless. Thinkers like Periyar, Ambedkar and Karl Marx kept her going. In 2005, she got her first professional training in filmmaking through a European Union fellowship. Since then, she has made several documentaries and won many awards.

In Sengadal, she focused on the fishermen of the ghost town of Dhanushkodi. In White Van Stories, she dealt with the enforced disappearances in Jaffna and Colombo during the Sri Lankan civil war. In Maadathy, she spoke for the “Unseeables”, the dalits among dalits.

The CBFC episode in 2010 taught her a hard lesson. “It is dangerous to be right when the government is wrong,” she had said.

During the #MeToo storm, she accused director Susi Ganesan of assaulting her. She faced him in court, got her passport impounded, and fought another legal battle to get it back.

Now in Toronto completing her Masters degree in cinema on a full scholarship at the York University, Manimekalai is in the midst of the Kaali controversy. “These trolls are after my artistic freedom,” she said. “If I give away my freedom fearing this mindless rightwing mob mafia, I will give away everyone’s freedom. So I will keep it, come what may.”