The ‘figure’ heads: How backroom strategists are changing Indian politics 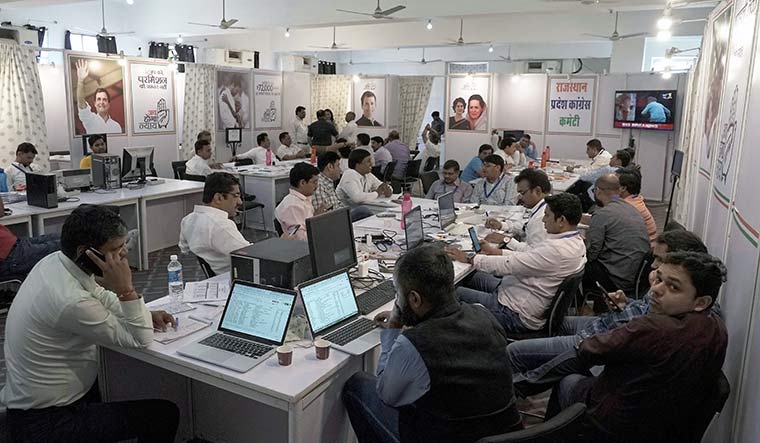 The number crunchers: Workers at the Congress’s “war room” in Jaipur in May 2019 | Reuters

Ever since BJP leader Pramod Mahajan and fellow strategist Sudhanshu Mittal redefined electioneering in India with their ‘India Shining’ campaign in the 2004 Lok Sabha elections, poll campaigns in the country have never been the same.

A tectonic shift in electioneering came with the emergence of ‘backroom boys’—a new breed of poll strategists who are changing not just India’s poll landscape but its political ecosystem as well. If the conservative politician banks on traditional ways of knowing the popular pulse, the poll strategist’s biggest weapon is data. It was his emphasis on data-crunching that helped election strategist Prashant Kishor seal poll victories for various political clients—the BJP in the 2014 Lok Sabha polls, the Janata Dal (United) in the 2015 and 2020 Bihar assembly polls, YSR Congress in the 2019 Andhra Pradesh elections, and the DMK in the 2021 Tamil Nadu polls, to name a few.

Advocacy groups like Kishor’s I-PAC (Indian Political Action Committee) and Sunil Kanugolu’s Mindshare Analytics continue to redefine election campaigns. As India gears up for the 2024 Lok Sabha polls, the moves of backroom strategists like Kishor and Kanugolu are drawing a lot of attention.

Poll strategists have always been there in Indian politics, but they used to work in silos—until 2014, when all aspects of electioneering were brought under a single roof, with one person overseeing the end-to-end process. Earlier, it was strategists from within the party—such as Mahajan and Arun Jaitley in the BJP, Jairam Ramesh and Ahmed Patel in the Congress—who assumed the role of the war-room manager. But, with the advent of social media and related technologies, politicians began seeking outside help.

The high-decibel campaign of the 2014 Lok Sabha elections helped professional strategists take centrestage. They not only conducted surveys and designed campaigns, but studied the impact of strategies and provided tailor-made solutions to mobilise party cadres and equip booth-level workers. The campaigning became structured, streamlined and presidential as well. Political parties started projecting chief ministerial candidates, like Devendra Fadnavis in Maharashtra and Charanjit Singh Channi in Punjab.

The last decade has seen a total makeover of the election war room. Political parties and candidates are outsourcing not just publicity campaigns, but are relying on professionals for brand-building and data crunching to evolve strategies, design campaigns and train volunteers.

There has been some pushback, though. Kishor’s roadmap for reviving the Congress failed to impress party veterans. Resistance to “outsiders” calling the shots has compelled some poll strategists to either be absorbed into political parties as “in-house experts”, or remain anonymous while making contributions.

Faced with resistance and new challenges, the consultants are reinventing themselves, setting new political narratives, engineering spins for better electoral outcomes and gradually changing the DNA of political parties by being part of the process of selecting candidates. Distributing party tickets is no longer the prerogative of a handful of party veterans, but a decision-making process based on scientific inputs. 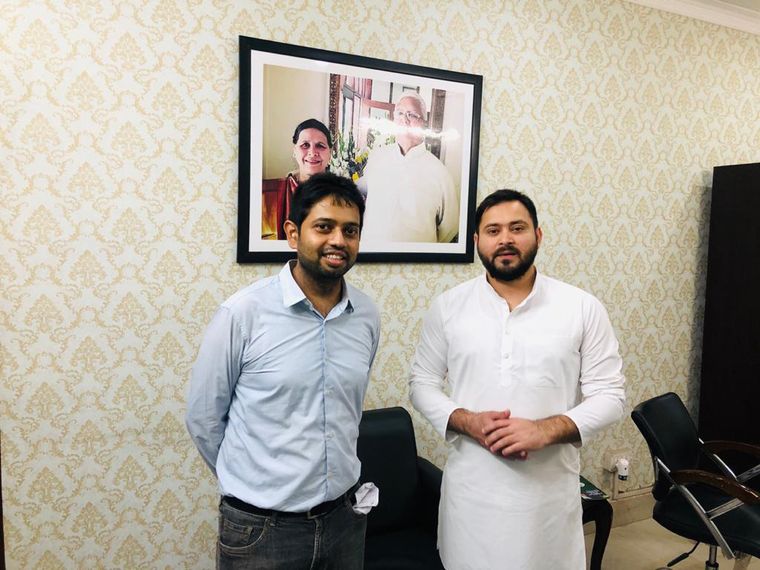 If Kishor is now hogging the limelight, his former I-PAC colleague Kanugolu chooses to work behind the scenes. Born and raised in Chennai, Kanugolu traces his roots to Bellary in Karnataka. He was a former McKinsey consultant, and led the Association of Billion Minds that ran a personalised campaign for the BJP in Gujarat. As part of I-PAC, Kanugolu played a key role in the victory of Narendra Modi in the 2014 Lok Sabha elections.

After quitting I-PAC in 2015, Kanugolu became the DMK’s campaign strategist in the 2016 Tamil Nadu assembly polls. His ‘Namakku Naame’ (We for us) roadshow to position M.K. Stalin as the chief ministerial candidate became hugely popular, even though the DMK lost the polls. He was again roped in to run the DMK’s campaign in the 2019 Lok Sabha elections, in which the party won 38 of 39 seats.

Kanugolu’s pro-BJP campaign in Uttar Pradesh in 2017 made Yogi Adityanath the chief minister. He also played his part in the BJP’s assembly poll victories in Uttarakhand, Himachal Pradesh, Gujarat and Karnataka. When Stalin chose Kishor as the strategist for the 2021 Tamil Nadu assembly polls, Kanugolu set up Mindshare Analytics and started working for the AIADMK. Around the same time, he was hired by the Shiromani Akali Dal for its campaign in the Punjab assembly polls. Having been appointed the chief election strategist of the Congress, his first assignment would be the Karnataka assembly polls, due in May 2023.

When Kishor was establishing himself in 2014, IIT alumni Saurabh Vyas and Gaurav Rathore of Gurugram set up the consultancy firm Political Edge. Vyas has a degree in aerospace engineering and Rathore studied metallurgical engineering and materials science. They have always had a passion for politics and data analytics.

“We focused on voting trends, created a database of party workers, sourced information from primary and secondary data, and studied election results. The advent of social media changed the game,” said Vyas. “Data became more structured and freely available in the public domain. In 2014, political parties started hiring professionals and many companies offering tech and event management services cropped up. Our core strength was data. So we started working with smaller parties and [candidates].”

Partha Das of the Bengaluru-based political consultancy firm Chanakyya has worked closely with Tejashwi Yadav of the Rashtriya Janata Dal in Bihar and Rizwan Arshad of the Congress in Karnataka. An IIM-Bengaluru alumnus and graduate in chemical engineering from NIT Surat, the 37-year-old Das has always had an eye on politics and elections. “I studied in Gujarat and later went to Tamil Nadu to work for Sterlite Industries. It gave me an opportunity to study elections in West Bengal, Gujarat and Tamil Nadu,” he said.

Das realised that most elections were “hypothesis-driven”, and that there was great scope for data analytics in politics. “We built a database of 90 crore voters that could help candidates make informed choices and design their election campaigns better,” he said.

In choosing clients, Chanakyya apparently focuses only on the younger bunch of politicians. “We invest our time and energy on younger candidates, as they have longer career spans and ambitions to grow,” he said. “Our target is the 2028 [Karnataka assembly] and 2029 [Lok Sabha] elections. We don’t meet people; they approach us through social media leads, or through our clients.”

Chanakkya is also reinventing itself to stay relevant in a fast-changing political landscape. “Our strength is microlevel data. When we are not working as political consultants, we are busy tracking election trends for partner TV channels…. We try to balance both the roles. A part of our income comes from data, as clients are interested in the voting patterns at the booth level,” said Das.

A good part of the credit for the Aam Aadmi Party’s sweep in the recent Punjab assembly polls went to strategies chalked out by Sandeep Pathak, a 42-year-old IIT Delhi professor. A close confidant of Delhi Chief Minister Arvind Kejriwal, Pathak, who hails from Chhattisgarh, is part of the core team of the AAP. He was recently nominated to the Rajya Sabha, and has been put in charge of building the AAP organisation in Gujarat, where elections are due later this year.

In terms of clients, strategy and style of functioning, every firm has its own set of preferences. If Kishor seeks to work with both tall leaders and grassroots workers, Kanugolu often works only at the leadership level. Political Edge goes beyond party politics to design campaigns around policy, development and governance issues.

“The approach changes depending on whether the client is a challenger or [part of] the incumbent government,” said Vyas. “Based on filtered information, the creative teams design the campaign. Not every campaign culminates in a victory.”

According to Vyas, the nature of Indian politics is cyclical, spanning 30 to 40 years. “So the idea is to put your best foot forward. When an incumbent loses, his losing margin will have an impact on his next election,” he said. “Measuring success only with winnability is not right, especially when it is about an individual, who does not control all the factors. In an anti-incumbency tsunami, the challenge is to arrest the sweep. That, perhaps, explains the Congress’s win in Rajasthan in 2018 after its poor show in 2013.”

Das said young leaders tend to embrace changes easily, unlike senior politicians who are often stubborn and reluctant to analyse data. He cited the example of how Rizwan Arshad, who contested the 2014 and 2019 Lok Sabha elections from Bengaluru Central and lost, won an assembly segment in the same constituency in a bypoll in 2019. Chanakyya had helped Arshad devise strategies based on demographic data. “We focused on Muslim, Christian and scheduled castes voters—in slums rather than in middle-class localities—for the best returns on effort,” said Das.

Electronic voting machines have been of great help in data analytics. “One could access booth-wise voting patterns, and corroborating that data with the voters’ list gives the demography of each segment,” explained Das. “This opened up new avenues to get insights into voting trends. The traditional system had political parties relying on hypothesis, but now we could understand the voter mindset on the strength of the data. Data tells a story and we read that story.”