Strategist to newsmaker: The intriguing journey of Prashant Kishor

Now not aligned with any party, his true ideology remains a matter of interest 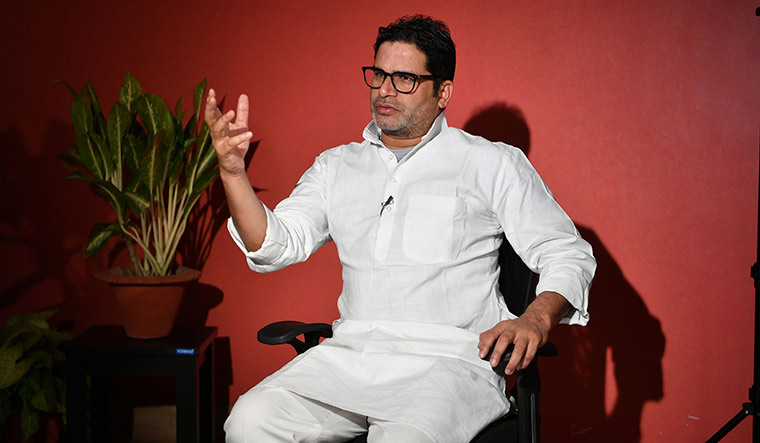 Prashant Kishor does not like to be referred to as a political consultant or an election strategist. Not any more. Exactly a year since he left the consultancy space, Kishor has announced that he is returning to his roots by launching an initiative called Jan Suraaj (people’s good governance).

It was in 2011 that he quit his job as a United Nations public health official to join the backroom team of the then Gujarat Chief Minister Narendra Modi. Since then, he has helped leaders like Nitish Kumar (Bihar), Mamata Banerjee (West Bengal), Amarinder Singh (Punjab), Arvind Kejriwal (Delhi) and Y.S. Jagan Mohan Reddy (Andhra Pradesh) win their states.

As a strategist, he popularised the use of survey findings and statistics to find out exactly what the voter wants and accordingly design a winning campaign. The aim of his Indian Political Action Committee was to ensure accountable governance. That was the reason he gave for his ideological agnosticism; he worked for parties across the political spectrum. And, unlike an ordinary consultant, Kishor enjoyed direct access to the top leaders he worked with.

What makes him special, according to I-PAC members who worked with him, is his ability to analyse statistics and survey results. He also introduced a more focused approach to electioneering and greater efficiency in the usage of resources. “Earlier, the pamphlets would be boring, with a lot of text and poor-quality images,” said an I-PAC member. “He changed that to bring in simple, precise messaging and the use of only one leader’s picture.”

Also, with I-PAC, getting ground reports was not limited to just one agency or just one round of survey. Kishor believed in going back to the target audience through multiple surveys and outreach methods.

He also used to stress that there could be no war without a general. And that has shown in the campaigns he was involved with, be it with Modi, Nitish, Kejriwal or Mamata.

Now, the legend of Kishor’s political canniness has begun to precede him, and whatever he says and whoever he meets is viewed with great interest. Like the latest talks he had with the Congress, which fizzled out (see interview). Downplaying the interactions, party leader Pawan Khera said, “The party is much bigger than questions relating to individuals. It consults strategists from time to time. He was given the opportunity to become a part of the process [of revival].”

It is not just within the Congress that Kishor has his detractors. There are also those who say that he has either been plain lucky or smart enough to hitch his cart to the winning horse—leaders he worked with were anyway expected to win.

His critics also say that he hogged the limelight and miffed the politicians he worked with, resulting in a parting of ways. And, as he has worked with leaders of various parties, his true ideology remains a matter of interest.

A Bihari, Kishor has now returned to his home state to launch Jan Suraaj. Though he says he could form a political outfit, which would signal his advent as a political leader, he says he would like to be known as a “political activist”.

The established political parties in the state have been watching with great interest, but they have downplayed his plans. “Any individual is free to carry out any experiment,” said Janata Dal (United) leader K.C. Tyagi. “He was our associate. He had launched a front two years ago, but that had failed. It is not easy to find your feet in the political system of Bihar. As far as the Nitish Kumar government is concerned, it is without any challenge.”

While it is unclear what path Jan Suraaj will take, Kishor will continue to be a newsmaker.