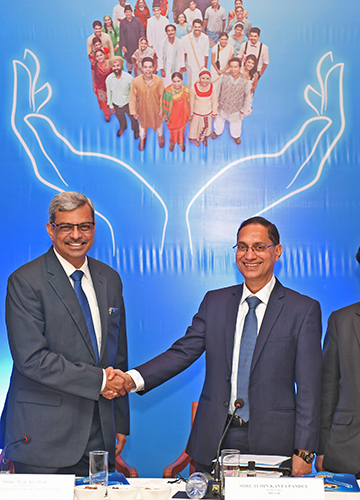 An average LIC agent issues 15 new life insurance policies a year; an agent of the nearest competitor does four. LIC chairman M.R. Kumar often makes this point to demonstrate not just his company’s market dominance but also the efficiency of its agent network.

India has 24 life insurance companies, but there is not even a semblance of competition to the top slot. In the year ended in March 2021, for instance, LIC’s market share was a staggering 74.6 per cent for individual policies and 81.1 per cent for group policies. (The latest figures are 71.8 per cent and 88.8 per cent, respectively, in the nine months till December 31, 2021.) LIC earned new business premium of Rs1.84 lakh crore in the year, while all other private players together earned just Rs941 crore.

“Nearly Rs10 out of every Rs100 saved by the Indian household every year goes to LIC, making it larger than even the perceived staple of household savings—a deposit with State Bank of India,” said Sunil Tirumalai, strategist at Swiss investment bank UBS.

Such dominance is rare in the insurance industry anywhere in the world. For instance, the top players in China, Ping An Insurance and China Life Insurance, have a market share of 21 per cent and 20 per cent, respectively. In Japan, the largest insurer, Nippon Life, has just 16.2 per cent market share.

What has led to this dominant position, of course, is the monopoly LIC enjoyed for decades until the door was opened for private players in 2000. Since then heavyweights like HDFC, ICICI and Bajaj entered the fray in partnerships with foreign insurance players. But LIC’s dominance continues, and it shows on the company’s balance sheet.

In the year ended in March 2021, LIC reported a net profit of Rs2,974 crore, up 10 per cent from a year ago. Its total income rose 9 per cent to Rs7.03 lakh crore and assets under management stood at Rs36.76 lakh crore. LIC is also India’s largest institutional investor. The stocks it owns in various companies are worth about $130 billion, which is about 29 per cent of total domestic institutional equity assets under management. It also means LIC has about 4 per cent stake in Indian equities, making it the single-largest stakeholder after the government. LIC also holds about 19 per cent of all government bonds, making it bigger than even the Reserve Bank, said Tirumalai.

What makes LIC such a dominant player, despite the steadily growing competition? “LIC proactively manages its financial risks through diversification of investment portfolio across asset classes, regular monitoring of interest rates to address market volatility, stress and resilience testing of the investment portfolio, matching of assets and liabilities on a quarterly basis, and conservative management of reserves,” said Vikrant Kashyap, research analyst at stock broker KR Choksey.

Insurance penetration in India, though growing, remains far below global average. In five years till 2020-21, the total life insurance premiums had grown at a compounded rate of 11 per cent to Rs6.2 lakh crore. Over the next five years, the industry is estimated to grow at a 14-15 per cent compounded annual rate to touch Rs12.4 lakh crore by 2025-26. “We believe we can create significant value from our strong starting position by tapping into under-penetrated segments and products, driving excellence on value-creating channels, building future-ready distribution channels and capabilities in maximising value,” said Kumar.

One concern is that LIC has been heavily dependent on its agent network to drive its business. The agent network accounted for about 94 per cent of new premiums for individual business in 2020-21; the industry average is 58.2 per cent.

Some of its rivals, like SBI Life Insurance, HDFC Life and ICICI Prudential, are promoted by large banks and, not surprisingly, the bancassurance channel (the selling of life assurance and other insurance products and services by banking institutions) accounted for as much as 55 per cent for their new business in 2020-21. In contrast, bancassurance and alternate channels (like corporate agents, brokers and insurance marketing firms) accounted for just 3.4 per cent share of new business premium for individual products for LIC.

Digital distribution platforms have been seeing strong growth for the insurance players. In financial year 2021, around 9.2 per cent of individual new business premiums came through this and the share is only expected to increase in the years to come. For LIC, direct sales accounted for just 0.15 per cent of new business premiums in 2020-21, which had grown to 0.39 per cent in the six months to September 30, 2021.

While LIC’s agent network remains its key strength in generating new business, the company has realised the need to widen its distribution channels. In February, it tied up with insurance aggregator Policybazaar.com to sell its term and investment products through online and offline platforms. It has also signed an insurance broking agreement with BSE Ebix Insurance Broking, a joint venture of BSE and Ebix Singapore Pte. Under this partnership, BSE Ebix will offer its clients LIC products.

A large chunk of the LIC premium payments already happen digitally. The past one year saw a 61 per cent rise in digital transactions, said Kumar. However, it is planning a separate digital platform that will help drive business. “We want to have an entire vertical, which would be a digital vertical, which will take into consideration everything that a customer wants, if he wants assisted online, if he wants seamless online products. That work is in progress,” said Kumar. LIC also intends to find more partners in the bancassurance and alternate channels and improve their productivity by providing digital solutions for getting customers.

LIC is also adopting a strategy to move towards the more lucrative non-participating products (the policy holder does not get any dividends or bonus) in an attempt to boost profits. In 2020-21, participating products (where a policy holder gets the share of the profits of the company through bonuses and dividends) accounted for 62 per cent of the new business premiums.