How the Russia-Ukraine war will affect India's defence supplies 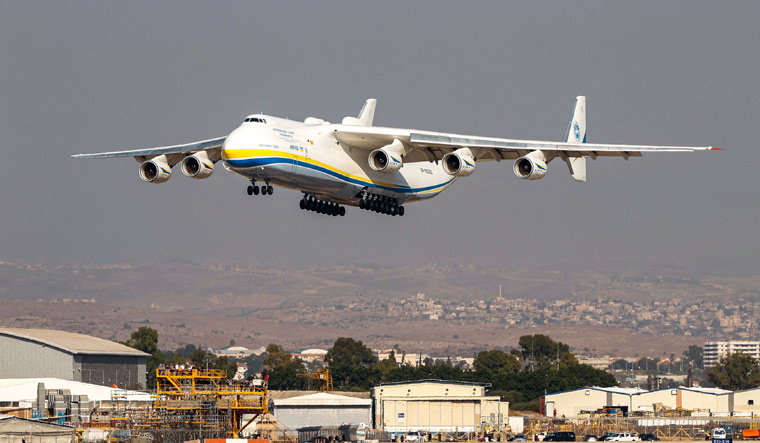 Giant in the sky: The Antonov AN-225 named “Mriya”, the world’s largest cargo plane. India has a strong link with Ukraine’s Antonov, and operates over 100 AN-32s | AFP

On February 27, Ukrainian Foreign Minister Dmytro Kuleba announced that the invading Russian forces had destroyed the “biggest plane in the world”—the Antonov AN-225 named “Mriya (The Dream, in Ukrainian)”—that was parked at Hostomel Airport, near Kyiv. The strategic airlift cargo aircraft that held multiple records was designed by the Antonov Design Bureau in the Ukrainian SSR of the Soviet Union in the 1980s.

India has a strong link with Antonov. In 1984, India became the launch customer for its AN-32 military transport aircraft. Designed to withstand adverse weather conditions, the AN-32s were used to ferry cargo and personnel to every terrain, including the Himalayan frontier. Even now, India operates over 100 AN-32s, though they are waiting for an upgrade to fly safely.

India is dependent on both Russia and Ukraine for the supply of critical defence equipment. Observers in the security establishment believe that the current conflict will adversely affect India at several levels. Besides new purchases, the Indian military’s existing platforms from fighter planes to air defence missiles, artillery guns and infantry combat vehicles to its T-72 and T-90 tanks are dependent on both Russia and Ukraine for critical spare parts.

“Certainly, the ongoing war will interrupt the deliveries…. Curtailing of defence supplies will impact India’s ability to respond to China [in case of a face-off],” says Phunchok Stobdan, former Indian ambassador to Kyrgyzstan. And the sanctions against Russia by the United States and other European nations put a question mark on India’s military purchases, besides deliveries of spares and supplies for existing equipment. From the project to produce AK-203 assault rifles in India to BrahMos Aerospace which recently bagged export orders from the Philippines, multiple India-Russia joint venture projects are likely to be interrupted. Experts, however, believe a delay in delivery of long-range air defence system S-400 Triumf—a process started in December last year—would be the immediate casualty. The delivery of nuclear submarine Chakra III, which is scheduled to arrive by the end of 2025, may also face some delay.

More than 70 per cent of the Indian military arsenal is of Russian origin. INS Vikramaditya, the Indian Navy’s sole operational aircraft carrier, is a refurbished Soviet-era ship. Moreover, four of the Indian Navy’s 10 guided-missile destroyers are Russian Kashin-class, six of its 17 frigates are Russian Talwar-class and its lone nuclear-powered attack submarine, INS Chakra, is an Akula-class vessel on lease from Russia. Similarly, most of the Indian Air Force’s fighter jets are Russian—it operates 272 Su-30MKIs and over 100 MiG-21 Bisons. The IAF also operates Russian-made Mi-17 and Mi-8 helicopters.

After the disintegration of the Soviet Union in 1991, the Indian military had faced a shortage of critical spares and had to chase the original equipment manufacturers. Incidentally, in the early 2000s, Russia had agreed to arrange all types of critical spares for Indian platforms. Simultaneously, India developed equally good ties with Ukraine, too, for its military needs.

India needs Ukrainian support for upgrading the IAF fleet of Antonov AN-32, supplying critical R-27 air-to-air missiles for its fighter jets, upgrading existing artillery and air defence systems, and getting engines for the four guided-missile frigates of the Indian Navy.

In 2008, the Indian government had signed a $400 million contract with Ukraine to upgrade its 105 AN-32 planes. Under the contract, 45 aircraft were upgraded in Ukraine and the rest were to be upgraded at Kanpur. But the project got delayed after Russia refused to supply Ukraine with critical equipment for the retrofit, following a breakdown of ties between Kyiv and Moscow over the Russian annexation of Crimea in 2014. Meanwhile, the IAF bought Lockheed Martin C-130J Super Hercules and Boeing C-17 Globemaster III transport jets from the United States.

Stobdan points out that India’s problem will grow worse if the US imposes sanctions on Russia under its Countering America’s Adversaries Through Sanctions Act (CAATSA). “[India’s] major military platform’s patent lies with Russia,” he says. “The key issue will be the payment as Russia is out from SWIFT—the international banking system.” The US seems to have provided a silent CAATSA waiver to India for purchasing the S-400 system. However, it remains to be seen whether it will maintain a similar stand on other future military purchases from Russia.

In 2018, India had signed a $950 million contract with Russia for four advanced Talwar-class frigates. But these warships are designed to operate with a Ukrainian power plant, and no alternative option is available. In 2019, India convinced Ukraine to supply engines for two ships to the Kaliningrad shipyard in Russia. But the engines for the other two ships are yet to be delivered. Experts maintain that India will have to look at countries like Georgia, Uzbekistan, and Kazakhstan for critical spare parts, as these countries also have old Soviet-era military platforms.

Retired Air Marshal M. Matheswaran, former deputy chief of integrated defence staff, believes the present conflict will hit India’s military preparedness if it drags on. He believes that Ukraine is being used as a pawn by the Americans and NATO. “There is no option for India but to take a neutral stand and not openly support anyone,” he says. “India-Russia partnership is more valuable and we cannot afford to damage it.”