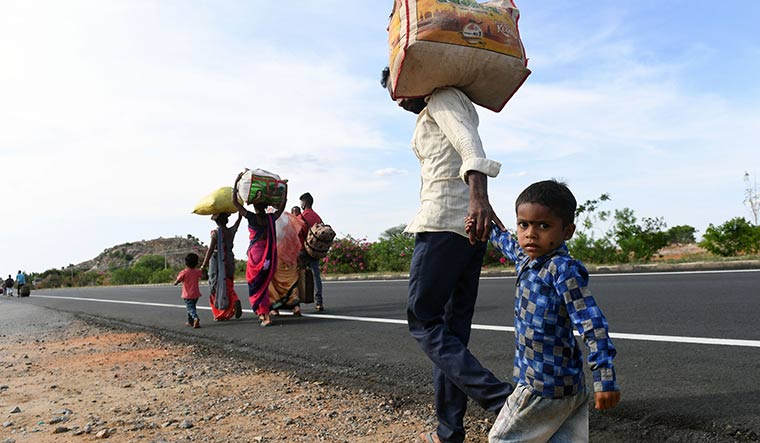 Not a walk in the park: Migrant workers on their way home from Bengaluru during the pandemic-induced lockdown | Bhanu Prakash Chandra

IT WAS THE BEST OF TIMES, it was the worst of times. The tale of two Mukeshs stands testament to that. The first one worked as a guard at one of the many high-rise condominiums dotting Gurugram. The first outburst of Covid-19 in the spring of 2020 surprisingly did not affect him, as the residents’ association offered all guards extra allowance.

But it all got a bit too much for him after a few months. On top of the long working hours was the fear of infection. Then one fine day, his contractor let him go, citing budget cuts. Mukesh has been on temporary jobs since then, with frequent spots of joblessness in between.

The other Mukesh is a businessman in Mumbai, who spent much of the past two years sewing up business deals with global tech companies and pivoting his oil-to-retail conglomerate to technology and renewable energy. He added Rs163 crore every day to his already immense wealth since the pandemic started.

“There were two distinct sides—one went down and the other went through the roof! There was no in-between really,” said celebrity chef Sanjeev Kapoor, whose business interests range from restaurants and food channels to cookware and nutraceuticals. “So, it really depended on which side of the fence you were sitting.”

Of course, two years of pandemic did not create these two Indias, but it has made them starkly divergent. “The series of massive disruptions over the past [two years] have tested the resilience of the people of India, its businesses, and the government,” said Rumki Majumdar, an economist with Deloitte. “Growth varied across industries. A few sectors did well through the pandemic, such as IT & tech, chemical, agriculture and pharma sectors. A few rebounded after mobility restrictions were eased, such as manufacturing and construction. Those that required social contact continued to struggle, such as hospitality and travel.”

While the national lockdown—announced on March 24, 2020—brought the country to a standstill and the economy on its knees, the government soon realised its folly and recalibrated, which saw business activities being allowed right through the peak of a deadlier second wave in April and May of 2021. Yet, through it all, some curious trends emerged.

As the whole nation got confined indoors, digitisation got a leg up, with anything from work (video calls and webinars), education (online classes, edtech), finance (UPI, fintech apps), entertainment (OTT and mobile internet) and shopping (e-commerce and hyperlocal delivery models) to even consulting doctors going online. Companies in the digital arena, or those that were quick with some digital dexterity, fared well, while the brick-and-mortar ones, especially small businesses, were knocked stone-cold by the ‘new normal’.

Pent-up demand (and also thanks to all the extra savings accumulated during lockdown months) saw a spike in consumer demand, even while companies were left scampering around trying to cater to it due to a supply chain mishmash across the globe. The government tried to help with a series of stimuli. “The government’s timely interventions to boost liquidity and reforms such as easing regulations, production-linked incentives scheme and several other bold reforms have buoyed optimism,” said T.V. Narendran, managing director of Tata Steel.

While these reforms thrilled India Inc and were billed Liberalisation 2.0, they seemed aimed at sweeping in bold long-term reforms that otherwise would have faced opposition, rather than providing immediate succour.

A LocalCircles survey among 6,000 MSMEs and startups last year found that more than half of them were planning to shut up shop or scale down as a result of the pandemic. It is clear that the very face of the economy is changing in favour of big businesses. “Yes, business would have moved to more organised players; it is good for the economy,” said Siddhartha Gupta, CEO of Mercer Mettl, one of the largest corporate HR companies in India.

After the Armageddon of the initial lockdown, the job market may be reviving, but is still far from robust. And worryingly, unemployment has been creeping up. It was about 8 per cent last month, up from 7 per cent in November, which was way higher than the 6.3 per cent average seen before Covid.

However, business leaders point to the big economic revival expected and how this would mitigate the present job scenario. “More than 50 per cent of employers say they will augment their workforce in 2022,” said Gupta. “And if there are job losses in the physical space, there are jobs being created in the same space by digital business models.”

The worry is the combined effect of the high rate of unemployment and the high rate of inflation. “India is an inherently supply constraint economy. Rising inflation tends to erode the demand which is already affected by the pandemic,” said Sangeeta Dutta Gupta, associate professor, school of management, BML Munjal University. According to the commerce ministry, overall wholesale inflation went up above 14 per cent last month, the highest since 1991. It could soon get passed on to the retail side, the point where we consumers get affected.

The divergent paths that the two Indias took mean corporate India is gung-ho about the future. Even the Omicron scare does not worry big businesses that have been on a consolidation spree. “The key economic indicators improved significantly and the economy started performing better than pre-Covid level,” said Pradeep Multani, president of the PHD Chamber of Commerce & Industry. “The knockdown effects of Omicron [may have an] impact on some of the key economic indicators caused by the volatility in the financial market [but] the reforms by the government during the last two years would provide a great support to the economy and mitigate any economic impact of new variants.” Whether it will give an equal, and equitable, leg-up to both Indias (and both the Mukeshs) remains to be seen.