In the long term, kids may be the biggest victims of the pandemic 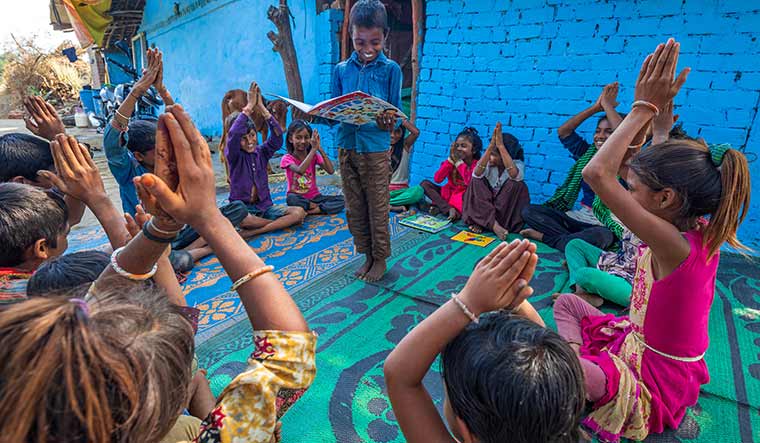 A bridge too far: A community class in Madhya Pradesh. Such attempts to bridge the digital divide were largely unsuccessful.

NEELU COULD EASILY belt out multiplication tables up to 26 when she was in class three. She had almost learned division, too. She was capable of reading and writing basic Hindi sentences and could also comprehend some English words. That was two years ago.

Now, Neelu, 10, a dalit girl from Nagla Shyam village, Bharatpur district, Rajasthan, is in class five. But, she can only recite tables up to nine. She can barely manage addition, and reads Hindi sentences with difficulty. Aman, her classmate, is even worse off—he only remembers tables up to eight and has completely forgotten how to read. “Neelu's and almost all her schoolmates' learning levels have reverted by four-five years during the past two years as lockdowns distanced them from education,” Suresh Sharma, principal, Nagla Shyam Primary School told THE WEEK.

About 750km away, in tribal-dominated Nogawa, Meghnagar block, Jhabua district, Madhya Pradesh, Nisha Dewal, 11, who was a class four student in 2019-2020, did not rejoin her school when it reopened in September 2021. She has forgotten everything she learned and her parents—both daily wage labourers—are unable to focus on her education as they struggle to care for their six children.

Siraj, 12, of Ghazipur settlement in East Delhi, dropped out of school during the lockdown because of the lack of access to online classes and the family income dwindling; his family is dependent on waste picking. He was found picking waste by volunteers of the Association for Social Justice and Research and was convinced to take classes at its child activity centre (CAC). But, Siraj remains out of school and continues to pick waste to support his family.

Wahid, 16, the third of six children from a daily-wager family in Trikolbal, Baramulla, Kashmir, was also forced to drop out of class 10. He began weaving shawls to help his family, but was inducted into the local CAC by volunteers of the Jammu and Kashmir Association of Social Workers (JKASW). He is now working and studying; he hopes to appear for class 10 examinations next year. 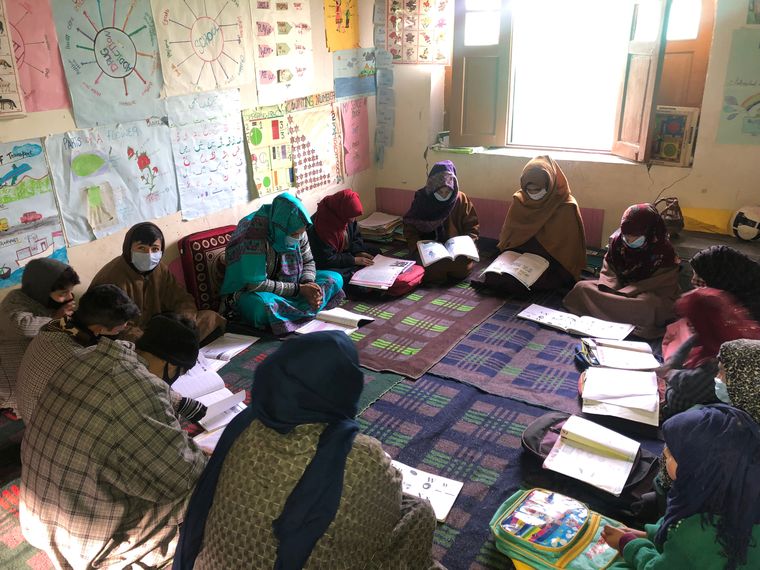 Double impact: Students at a child activity centre in Baramulla, Jammu and Kashmir, where schools closed in August 2019, after Article 370 was scrapped.

In Telangana, Kommu Silamma, a class nine student from Janumpally village on the periphery of Nallamala forests in Nagarkurnool district, warded off what she terms a disaster. With the help of a team from the NGO Shramika Vikasa Kendram (SVK), she managed to convince her farmhand father to not marry her off. It helped that Silamma was already part of the children's collective of the SVK. “But other girls in the 52 villages of Nagarkurnool and Wanaparthy districts that we work in were not so lucky,” said Laxman Rao, founder, SVK, which is supported by Child Rights and You (CRY). “We are aware of at least 33 child marriages in these villages during the past year.”

These are just a few examples of how children, especially those under 12, have suffered during the pandemic. Experts, parents, teachers and activists all agree that children are arguably the biggest victims of changes necessitated by Covid-19. “Their play spaces and times, and peer interaction is practically gone,” said child rights advocate Priti Mahara. “The closure of schools left them with huge learning losses [because of the digital divide]. Kids from the marginalised sections are naturally more vulnerable to being pushed out of the formal education system and becoming victims to child labour and child marriage.”

Puja Marwaha, CEO, CRY India, said that the scarcity of data was a big challenge. “Large scale studies on the impact of Covid on children are yet to be conducted,” she said. “But, yes, grass-roots level experiences and anecdotal evidence do reflect their increased vulnerability.” She added that a real-time and comprehensive database on child development indicators would help assess the losses incurred and enable interventions. 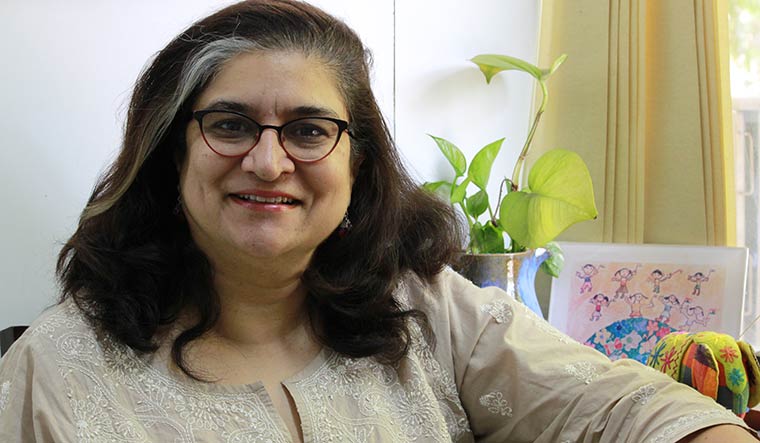 The available data is as scary as the anecdotal evidence. According to UNICEF, the closure of 1.5 million schools in India in 2020 impacted 247 million children. A recent UNICEF India report said that only 60 per cent of students in India used any remote learning resources and, even among them, nearly 80 per cent reported that they were learning less or significantly less than in school.

A study by the Bharat Gyan Vigyan Samiti (BGVS) in Madhya Pradesh found that 67 per cent of the kids were working regularly on family farms or in shops. A BGVS study on the situation in Nagaland, Manipur and Mizoram found that 56 per cent either did not take online classes at all (25 per cent) or did so irregularly (31 per cent). A UNICEF, World Bank and UNESCO report quoted data from Karnataka saying that class three students who can perform subtraction dropped from 24 per cent in 2018 to 16 per cent in 2020.

In Kashmir, the distress was compounded by the fact that schools closed after Article 370 was scrapped in August 2019. They opened only for two weeks in March 2020 before the pandemic hit. “This long closure of schools has affected the learning levels of all children, especially children in communities which are primarily dependent on government schools,” said Ashfaq Ahmed Mattoo of JKASW. “Though the education department has intermittently operated community classes, radio classes and online classes, access is a major issue, and these cannot replace regular school.”

Another challenge was the lack of preparedness among teachers to conduct online classes, especially in the case of primary school teachers in government schools. As per a 2019 survey by the Associated Chambers of Commerce and Industry of India and Primus Partners, only 17 per cent of teachers in government schools reported that they were trained to conduct online classes. In private schools, this figure stood at 43.8 per cent.

While the poor were hit hard, suffering, in one or another of its many forms, had to be dealt with across societal strata. For instance, the mother of a five-year-old girl from a well-to-do family in Delhi is noticing some worrying things about her daughter. The little one gets scared by traffic noises and is reluctant to cross busy roads when she is taken out. “I think the forced confinement during two crucial years of her childhood has really affected her,” said the mother, who juggles her high-profile work from home with her kids' needs. The girl is yet to make any friends and hardly has any exposure to the outside world, the mother, who requested anonymity, added.

“The psychosocial and developmental impact of Covid-19 on kids, though fortunately not yet affecting them much health wise, is likely to be long term and teachers and parents will need special skills to handle it,” said Mahara. “As we brace up for the probable next wave with unvaccinated kids, the focus (on their well-being) needs to be razor-sharp.”

Names of all children changed to protect identity.