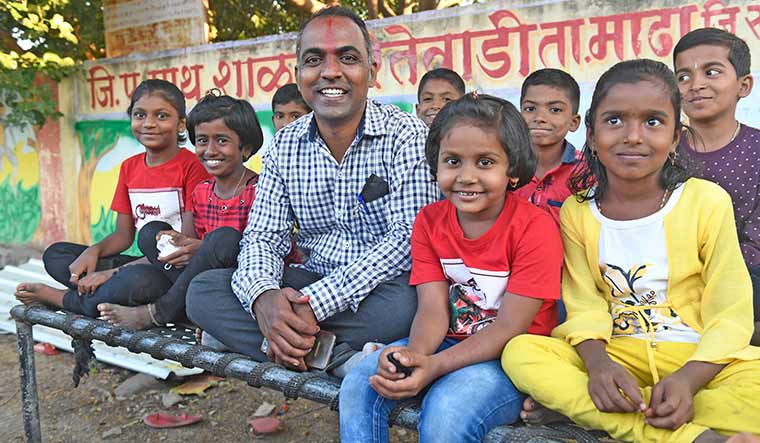 HAVING WON THE GLOBAL Teacher Prize—given by the Dubai-based Varkey Foundation, in partnership with UNESCO—last December, Ranjitsinh Disale became famous overnight. The 33-year-old from Maharashtra, though, was thinking of how best to spend the $1 million prize money. He said he would share half of the prize money with the nine other finalists for the award. With his half he launched a programme called ‘Build Back Confidence of Girls’ in seven schools covering 620 girls back home in Barshi, Solapur. When he was first starting out as a teacher there, in 2009, he had had trouble persuading girls to attend school. Disale also tied up with Nehru Science Centre in Mumbai to organise lectures in the district’s schools.

As part of his outreach abroad, he announced scholarships for 10 students each in Italy and the US. “In the US, we chose refugee students as we felt they deserved help more than anyone else,” Disale told THE WEEK.

He also took up a project to digitise two schools in Nigeria and started libraries in a few Vietnamese schools.

Disale is a pioneer when it comes to using technology to teach in rural areas. He was the first government school teacher in Solapur to use a laptop in class. He would teach using YouTube videos, PowerPoint presentations and audio clips, and came up with the idea of pasting QR codes in textbooks. This was a hit in Solapur, so much so that the Maharashtra government decided to include QR codes in all textbooks from classes 1 to 10.

Disale is like a friend and mentor to his students, and has even taken on issues such as child marriage in his district. He firmly believes that technology has to be used effectively to bridge the many gaps in the current education system. In June, the World Bank appointed Disale as an education adviser for three years. Earlier this month, he also got the Fulbright DAI scholarship. For a guy whose first classroom was a cow shed, Disale sure has come a long way.