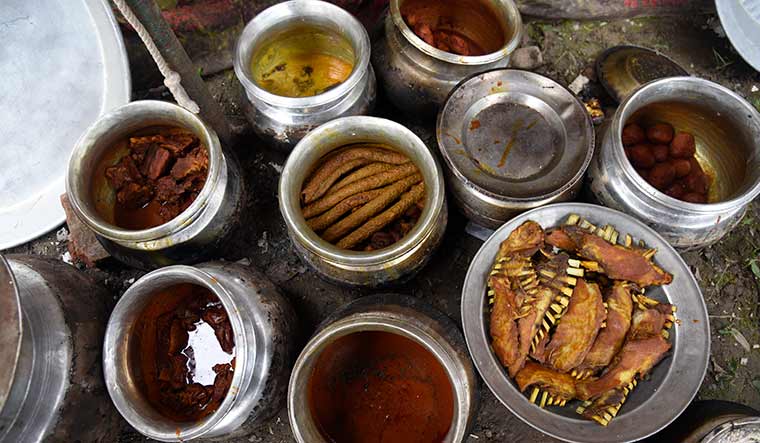 Quintessential kashmir: The many dishes of the multicourse meal | Ubaidullah Wani

IF YOU GO to a Muslim wedding in Kashmir and see groups of four hunched over a beautifully embossed tream (a round copper plate), they are assuredly sharing a wazwan—a multi-course meal of meat and a few vegetarian dishes. Kashmir’s love affair with wazwan goes back a long way, to the time when the silk route facilitated trade between Kashmir and Central Asia. In the 14th century, when Islamic missionaries came to Kashmir, they brought with them a new religion, new forms of art and new methods of cooking.

Preparing a wazwan, mostly consumed by Kashmiri Muslims and Pandits, is an art in itself. What makes the wazwan sumptuous is the way it is cooked and the spices added, like fennel, asafoetida, shallots, cardamom, black cardamom, red chillies and cockscomb. The spices are ground (red chillies), fried (asafoetida and shallot) and boiled (cockscomb). Cinnamon and garlic are added to give a unique flavour and aroma to dishes like rista (mutton meatballs with curry). Then there is the gushtaba, made of tender meatballs cooked in a milk-based gravy; it is served at the end of the meal. Locally, it is known as yakhni.

According to Muhammad Yasin Reshi, a leading chef and faculty member at the Institute of Hotel Management in Kashmir, wazwan is a combination of two words: ‘waz’ (cook) and ‘wan’ (a shop). The ‘shop’ signifies the display of the paraphernalia used for cooking. “Different types of utensils and tools are used for cooking, chopping and mincing the meat,” he says. “And everything is spread out and put on display.” 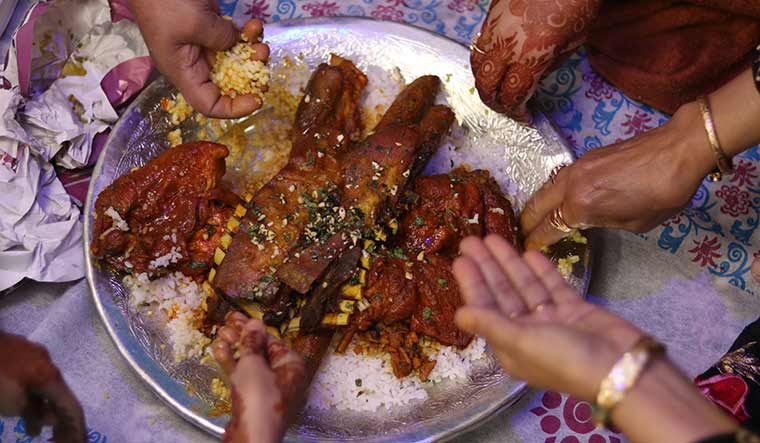 Reshi says the uniqueness of the wazwan lies in the use of spices. “We use only a few spices and most are imported,” he says. “The wazas (chefs who prepare wazwan) are not technical people. They have learned this art of cooking wazwan from people who have been associated with it for generations.” He says each dish tastes different. “Originally, there were only seven dishes in a wazwan, but it can be extended to over 30 dishes,” he says. “A good wazwan is also about meticulously selecting different parts of a lamb or a goat for the dishes.”

He enumerates the differences between a wazwan made by a Pandit and a Muslim. The Pandits include fewer non-vegetarian dishes. “The cooking style is largely the same,” he says. “The Pandits use asafeotida while Muslims don’t. The Pandits eat in thalis due to the caste system, while Muslims eat in a tream.” The Pandits serve sukhta as a sweet dish while Muslims serve phirni. The sukhta is made with dry fruits and cheese deep-fried in sugar. It also has saffron and honey.”

The process of making meatballs for rasta and goshtaba is not easy. It involves beating the mutton to paste with a wooden pestle and then combining it with the spices. Some of the vegetarian dishes are made of haakh (collard greens), bum choonth (quince apple) and header (mushroom). “The process of preparing wazwan starts on the eve of the meal,” says Muhammad Lateef, a third-generation waza. “From chopping and mincing to adding spices and colouring agents like chilli paste.”

The wazwan is a celebration of everything Kashmir stands for. Culinary expert Abrar Wani says that it is equivalent to a French multi-course meal comprising 17 dishes. “If you talk about modern gastronomy, chefs outside Kashmir are trying to copy it but, like cooking rogan josh, they are messing it up. The rogan josh that you eat outside Kashmir is a pirated copy [of the original version].” Many traditional waza families are now exporting tinned wazwan. After all, there is nothing like a wazwan to drive away your worries.