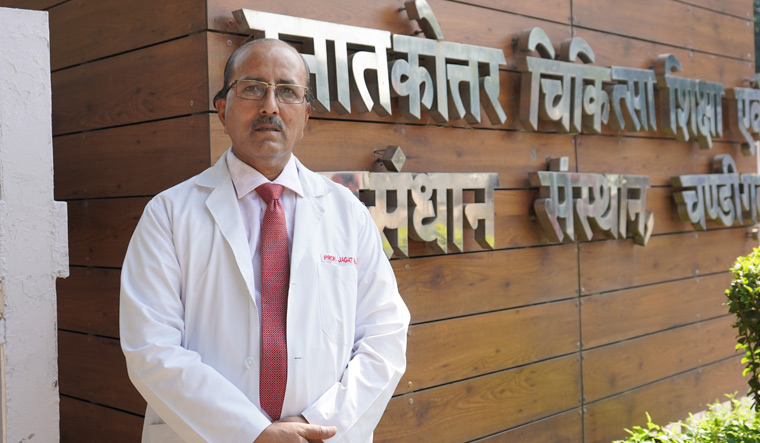 The disastrous second wave of Covid-19, during which the highest number of cases shot up to 4.14 lakh on May 6, is now over. Since then, there has been a steady decline in the number of cases all over the world. In India, too, the numbers are decreasing significantly. Some fluctuation was seen in Kerala and Maharashtra, but now the average number of daily cases is down to between 20,000 and 30,000.

The magnitude of the third wave has diminished because a significant number of people have developed antibodies. There are two reasons for this—first, a large number of people were infected, and second, from January 16 onwards, there has been a massive vaccination drive in which close to 75 crore people received the first dose and nearly 25 crore got both doses. So although we are now almost in the third wave, this is a low magnitude wave and it is unlikely to turn into a high magnitude one like the second wave.

Many people thought that the paediatric population would be very significantly impacted, but it is unlikely. At PGIMER (Post Graduate Institute of Medical Education & Research, Chandigarh), we carried out a study in a sample size of 2,700 children from 30 selected areas, including rural, urban and slum areas. It showed that overall seroprevalence in children in the 16-17 age group was 68.3 per cent. It was higher in rural and slum areas at 75 per cent, while in the urban areas, it was 67 per cent. Although children have not yet been vaccinated, they have developed antibodies as a result of infections. In children, the infections have been mild to moderate and their mortality/morbidity rates have been much lower compared with adults. So the magnitude of the third wave will not involve children. Also, this time we are fully prepared in terms of infrastructure, including beds, ventilators and staff.

We have also seen fluctuating smaller waves in regional variations. Even the delta variant, despite its high transmissibility, did not result in increased mortality rates. The variant has been quite common in north India, especially Punjab, where a study showed that almost 70 per cent of the sample showed the variant. Covid-appropriate behaviour, however, is still required by both adults and children, to avoid the type of disaster caused by the first two waves.

Meanwhile, we have invited children in the age group of 2-17 years to volunteer in the second and third phase of trials for the Covovax vaccine made by Novavax. This trial will help determine the safety, immunogenicity and antibody formation in response to Covovax. The Serum Institute of India is also conducting Covovax trials in children aged between 7 and 11. The results of both studies will be compared. Our research so far has shown that the Covishield vaccine can cause general side effects such as cold, cough, fever, respiratory irritation and weakness, but there will be no major toxicity.

Although vaccines are being readied for children, we should be careful about reopening schools and colleges. Ideally, we should start with plus two classes and colleges. The schools can start from the higher classes and go gradually to lower classes. We need not wait for all children to get vaccinated because a significant number of them—around 70 per cent—already have antibodies.

—As told to Pooja Biraia Jaiswal