How a woman police chief took on the Taliban 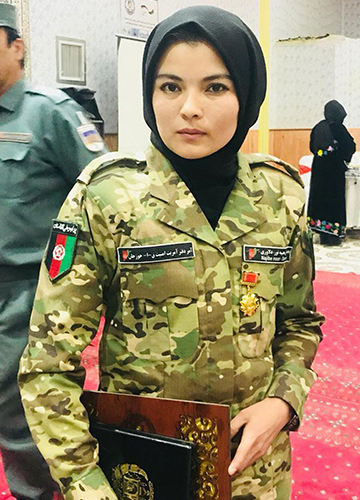 Afghan warlord Abdul Rashid Dostum is no stranger to conflicts, or controversies. His exploits during the war on terror have been immortalised in the Hollywood movie—12 Strong, starring Chris Hemsworth. He can boast of a biography—The Last Warlord: The Life and Legend of Dostum, the Afghan Warrior Who Led US Special Forces to Topple The Taliban Regime by American academic Brian Glyn Williams. He also pops up as an important card in the board game, A Distant Plain.

When the Mujahideen rose up against the Soviets in the 1980s, the 67-year-old warlord of Uzbek ethnicity stood with the Russians. With thousands of troops and fighter jets under his control, Dostum then fought the Taliban under the Northern Alliance banner. He fled the country when the Taliban 1.0 took Kabul.

Post 9/11, he joined America’s cause and spearheaded the ground invasion against the Taliban. War crimes apart, the former vice president was later accused of torturing and raping a political rival, leading to his temporary exile. Dostum came home as the Taliban started regaining control of the provinces. His return raised hopes of Afghans, especially those in his bastion and home province of Jowzjan in north Afghanistan. One among them was Najiba Noor Dilawari, police chief of Jowzjan’s capital, Sheberghan.

Followed by hundreds of commandos and an enviable number of private militias, Dostum fled to Uzbekistan. Najiba is proud of doing the opposite—she stood up to the Taliban and took a bullet.

Najiba, 25, is one of those rare woman police officers in Afghanistan to rise to the top. Her journey captured the attention of the local and international media. She came from a family of Talibs. Her father was one of them, but Najiba says she convinced him to join the peace process. The people of her city see her as a courageous officer who vehemently opposed the Taliban, in words and action.

For months before it captured Kabul, the Taliban had been engaging with government forces in Jowzjan. Najiba says the clashes got severe and frequent; on most occasions, the government forces were able to overpower the Taliban. But it all changed on a Friday in August. After capturing the rest of the province, the Taliban came for the capital city.

“The Taliban attacked Sheberghan from all sides,” recalls Najiba. “It was terrifying. Some of the commanders of the province did not fight and just surrendered. Only a few commanders fought.”

Najiba and her team were among the few who took on the Taliban. A bloody encounter ensued, in which, claims Najiba, she shot down more than two Taliban members. In the process, she got shot in the leg. Bleeding, she left the spot to an unknown location as the Taliban marched into the city. “My injury was not so serious, but the pain was severe,” she says.

The next few days turned out to be daunting for her. Najiba says she had to be transferred from one hideout to the other, almost on a daily basis, to avoid being captured. It also meant that she was treated while on the run.

And then came the call—the Taliban asked her to surrender or face the consequences. “They said that if I didn’t listen, I would lose my house,” she says. “Later, they burnt down my house.” Though her family is safe, she says she lost her cat in the attack. 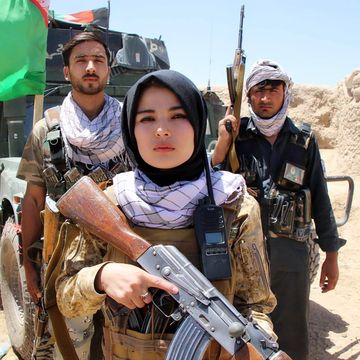 Fighting for honour: Najiba shot down two Taliban fighters in an encounter.

It did not stop there. The Taliban tortured all those who sheltered her. Some of them were badly injured, says Najiba.

Sensing that she would be at grave risk if she was in Sheberghan, her well-wishers in the government moved her to another city. Najiba says she was flown to Balkh, the neighbouring province, where she spent a few days in its capital, Mazar-e-Sharif—one of the last cities to fall before Kabul.

All this while, she was not beaten into silence. As the Taliban overran cities and she moved from one place to the other, she kept posting on Facebook, about the Taliban’s atrocities and regressive policies.

Her fighting spirit was intact even as she was in hiding. She would have joined the Panjshir forces, she says, if she had a military backup or foreign help. Najiba left Afghanistan and is currently in the United Arab Emirates. “I don’t know how long I will be here before I am transferred,” she says. She is unwilling to reveal who helped her cross the borders and how. She says some foreigners came to her rescue.

Looking back at the last few weeks of the Taliban’s recapture of Afghanistan, Najiba says that the Taliban indulged in psychological warfare through social media to scare people and give an impression that they had arrived. But she is also disappointed that some people in the government had already “sold the country”. “I am happy that I did what I could and didn’t surrender,” she says. “I fought and shed my blood for the sake of my country.”

Najiba had also been encouraging women to take up arms. A few years ago, the Islamic State of Khorasan Province, a regional affiliate of the Islamic State, got a foothold in one of the districts in her province, edging out the Taliban. The members of ISKP were accused of harassing women. Later, the Taliban recaptured the district after an intense operation. Some of the women who were victims of both the Taliban and ISKP violence were given weapons training so that they could stand up against them.

Did the women who Najiba trained fight alongside her? “No,” she says. “None of them did. It was not their responsibility; it was mine. I was on the front line.”

Today, Najiba is at a crossroads, unknown of her future and in a land that is not her own.