India never does things we expect it to do: Afghan woman's rights activist 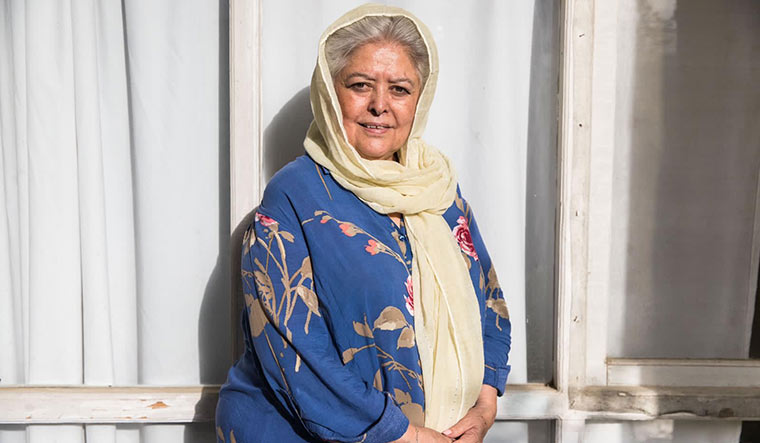 On the night of September 18, a group of Taliban men arrived at the house of Mahbouba Seraj, human rights activist and president of the Afghan Women's Network. They asked questions about her work and then demanded to visit the shelters she ran for girls and women. For the women of Afghanistan, the battle is not yet over, as they continue to live under constant fear and uncertainty.

In an exclusive interview with THE WEEK, Seraj, who is based in Kabul, said the condition of Afghan women had become terrible under the Taliban. She attributed the Taliban's adversarial attitude to the 20 years of war during which the group had to endure endless American attacks. She also warned that Afghanistan could soon become a hub of global terror under the patronage of the ISI and the Haqqani network.

Could you describe the Taliban visit to your home?

A car full of people—around seven to nine tall, burly men—came to my home at 9pm. They said they wanted to see the shelters I ran for women. I told them it was not right to come to my home so late in the night and that their presence made the girls extremely scared. After they left, I had to spend some time with the girls to make them feel comfortable. I have 18 women in one shelter and 14 in another one. The youngest one is 14 and the oldest is above 75. These are abused orphans who belong to disturbed backgrounds. The Taliban does not know how we function.

Have you reached out to anyone in the government?

I got very upset when the Taliban visited me at night. I am not used to this kind of demeaning and accusatory tone and behaviour. The girls did not like the fact that two of the Taliban men sat down inside the shelter, asking their names and other details. Never has a man entered that place. All the workers in my shelter are women; men are absolutely not allowed inside.

I do not know whom to contact in the government, but I will try to find out and get in touch with them and tell them what they should not do because it is not good for them. I want to tell the Taliban people through media platforms or sit and talk to them about how we need to help the Afghan women and make it a collaborative effort, but that is not happening.

The Taliban has said that women can join the government and girls will be allowed to go to school.

Schools have been opened for boys. The Taliban said it was working to open schools for girls, but we have to wait and see if that happens.

How big is the drug problem among the youth? How do you expect the Taliban to deal with it?

The Taliban thinks it can beat the drug habit out of a person [just like it believes that beating someone will make him] a better Muslim. That is what it wants to do. Anything else, it does not care. The strangest thing is that the Taliban has lived in such a bubble all these years, having no contact with the rest of the world. It has lost touch with reality. It will not understand why there is a drug problem and what it does to society.

What about the implementation of sharia laws?

If the Taliban really stands behind the sharia laws, it is not going to be good, because its interpretation of the sharia is very harsh. The way it sees the sharia laws, there can be no life in the sense that we all know.

What do you think about the resistance movement against the Taliban?

I do not know whether it is actually a resistance or just a way to create a position for a few people. Resistances are usually not person-bound, but start from one person or place and grow and move to other places. I do not see resistance spreading right now.

For 40 years, this bloody thing has been going on and on and it is killing us. So, it is very difficult to sell this idea of a resistance. Other than Ahmad Massoud, the rest of the ex-mujahids are so corrupt that no one wants to stand around them at all.

The ISI chief was in Kabul recently. How do you see Islamabad's involvement?

The ISI chief did not have to put his nose in Afghan affairs. He did not have to ensure that the whole world knew that he was here and was meeting his boys! Of course, Pakistan has a hold on the Taliban. It could have made things better, but it did not. The ISI chose to do things that way and now things are completely different. Now we have the Haqqani group sitting here and dealing with the government and that by itself has created a lot of rifts within the Taliban.

What about the role of New Delhi?

I really had a lot of hope from New Delhi, but even though India is a fantastic friend and has helped us a lot, every time there is a change of government, like when the communists came to Afghanistan and even this time, New Delhi either stays in the background or takes the side of the people they are not supposed to.

India never does things we expect it to do. I do not know if it is foreign policy or pressures of the world, but the fact is that India could have done a lot more. I do not know how effective its role will be from here on, but there was a window of amazing opportunity for India and that was missed.

What did you expect New Delhi to do?

I was expecting more mediation and more involvement in talks, especially putting pressure on the Afghan government. Prime Minister Narendra Modi and former Afghan president Ashraf Ghani were close friends, so Modi's words could have had an effect on Ghani. Today, Pakistan and China have a very strong hold on Afghanistan policy.

Have world leaders let Afghanistan down?

To the world leaders, I will say ‘thank you, but no thank you’. Please do not do anything for us, because every time you want to do something, you have messed up our lives. Let us be, wherever we are. Please leave us. But the consequences are going to be extremely bad for the world because if Afghanistan becomes the hub of terror, then the world will suffer. So, if you really want to do something, it has to be from the depth of your hearts, otherwise please leave us alone.