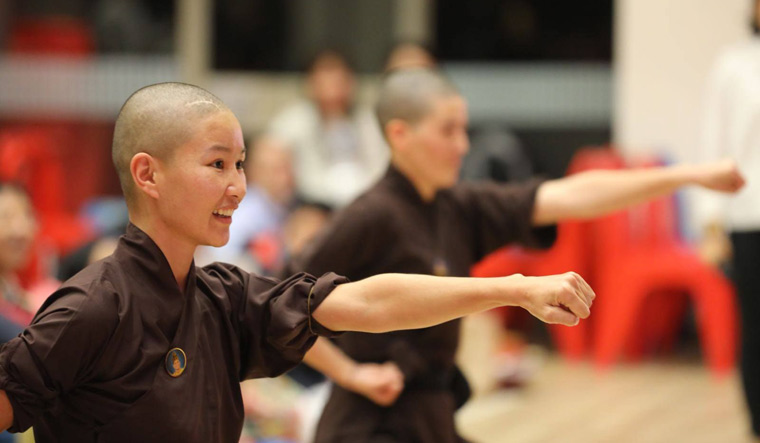 Her story of total surrender started with rebellion. At 16, Yeshe Lhamo ran away from home to become a nun. “My parents refused [permission],” she said. “I was quite good at studies. In our village, there were no monks or nuns. I was the first.”

It all started when the Gyalwang Drukpa—head of the Drukpa lineage of Buddhism—visited her village for the first time. “I wanted to be an army officer. But I had an accident and I could not enlist,” said Lhamo. “[Gyalwang Drukpa] was talking about women empowerment; how, if you give equal rights to men and women, there would be a better future. I had never heard anyone talk like that. I suddenly said, ‘I want to be a nun and go with him.’” He would become Lhamo’s guru.

Women’s place in Buddhism has been in question since the time of the Buddha. At the Druk Amitabha nunnery, on the outskirts of Kathmandu, Nepal, the day begins with meditation at 3am. The first year was the toughest for Lhamo. “It was difficult for me to wake up. I used to get up at 7am,” she said with a laugh. “The next year, we went back to the village. When my parents met me, they were crying. They said I looked totally different.”

The Drukpa nuns come from a 1,000-year-old Buddhist tradition that began with the first Gyalwang Drukpa, who is said to have witnessed the flight of nine dragons into the sky. In their monastery, tucked in the mountains of Nepal, the nuns have become part of the landscape. Each evening, they go out on bicycles for a parikrama (circumambulation)—now on hold because of Covid—to demonstrate that nuns have the same rights as the monks.

“A nun can do anything,” said Lhamo, an infectious smile lighting up her face, framed with her big round glasses. “When we talk about women empowerment, I feel that the word ‘empowerment’ should not be used. Empowerment feels like someone is giving you the power now. But, women have the power already. They have to realise it and think, ‘We can do it.’ You have to be your own hero.”

Considered the descendants of dragons, the Drukpa nuns of the 21st century have chosen to fly. They are, after all, the Kung Fu nuns.

The tradition started in 2008, when nuns from Vietnam arrived and taught them kung fu for self-defence. “It is painful," said Palmo, who has been a nun since she was 14. “Kung fu is not easy. We have to do splits and it is difficult.” At first, there was opposition from the men. The nuns came from a conservative community and their clothing attracted “bad comments”, Palmo said.

“When we first started self-defence classes for girls in our community in Ladakh, there was backlash,” said Palmo. Over the years, however, what started as a tiny experiment with kung fu became an integral part of their religious practice. Kung fu has armed the petite and pretty Palmo to confront her own fears. A shy child, she never had the confidence to walk in front of boys. Not anymore. The nuns have now travelled the world inspiring many. Their heads shorn, they defy gravity and patriarchy. In 2019, the nuns were conferred the Asian Game Changer Award for, as the citation said, “empowering young girls and dismantling gender stereotypes, one kick at a time”.

But their contribution to society is not limited to championing women’s rights. The nuns have gone on padyatras across their country, spreading the message of environmentalism. During the 2015 Nepal earthquake, the nuns refused to be evacuated to India. Instead, saddled with baby food and rice, they trekked to the affected villages. “People were surprised when we arrived, especially when we arrived in places where the military had not gone,” said Lhamo. They did not expect nuns to come to their aid.

Even though kung fu brings with it the benefits of building core strength essential for the long padyatras, at the heart of learning the martial art form is the addressing of a larger issue—the place of women in a religion that is monastic. Kung fu for nuns, thus, breaks another glass ceiling.

“We are the first nuns to lead the rituals and to do the ‘Dharma’ dance, which was forbidden for nuns for a while,” said Lhamo. “There are so many things we did first as nuns. Breaking stereotypes is something we did when we came here. If I were not a nun, maybe I would feel that someone else would do that. Why should I be different? But here, His Holiness wants us to be different.”

Ashoka, who is credited with taking Buddhism to the world, did not support gender discrimination. After his rather public conversion, he sent his daughter, Sanghamitra, and his son, Mahendra, to spread the message. 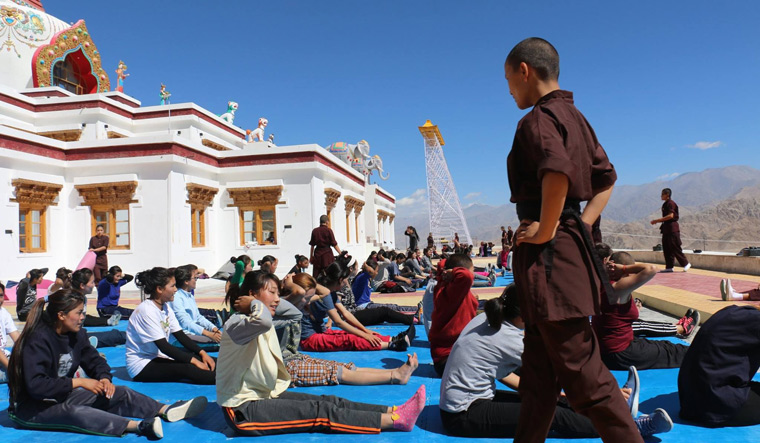 For 1,500 years after the Buddha, the tradition of the nun had flourished only to disappear from large parts of Asia. Women have been forbidden from performing pujas, and are not often fully ordained. In countries like Cambodia, there are no nuns anymore.

The story goes back to the time of the Buddha, when he is believed to have refused the entry of women into his order. Legend has it that his aunt, who was also his foster mother, wanted admission. She came with 500 princesses. The Buddha was initially reluctant. Ananda, his most loyal disciple, is believed to have intervened and asked whether women could gain full enlightenment. The Buddha is believed to have said that women are equally capable of reaching the highest levels of spiritual enlightenment as men. But his initial hesitancy has been used against women in the faith for centuries.

In the last decade, there have been attempts to change that, especially within Tibetan Buddhism. The Dalai Lama has even hinted that the next Dalai Lama could be a woman. The Karmapa school has also been at the forefront of fully ordaining nuns. It is a battle for gender equality that is harder to fight as it is for acceptance in society and, more importantly, within the community. The Therigatha, poems by the first Buddhist nuns, is a collection dating back to the sixth century BC. It is considered the oldest literature by women in India. They once had a voice. Now, they are rediscovering it.

“Our guru wanted us to show the example, and then we wanted to teach the world,” says Lhamo. “We don’t have to fight for it, because fighting will never [solve] anything. But if you see it in action, then you will believe.”