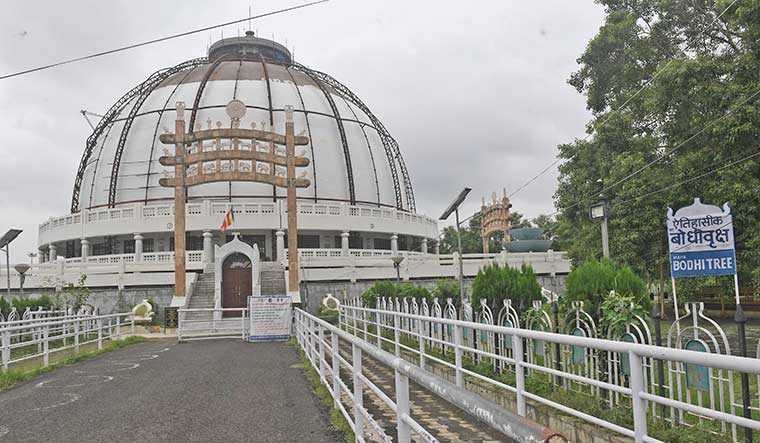 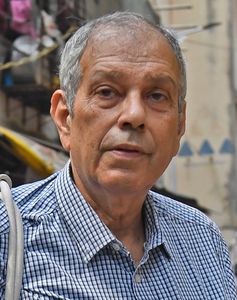 When we were in Nagpur in the 1990s, Anuradha and I would, every year, visit the Diksha Bhoomi on Dussehra day – the day Ambedkar took diksha into Buddhism in 1956, and commemorated every year with lakhs turning up. I believe the crowds are even larger now. It is also the day when the sarsangchalak of the RSS issues his public address on a ground just about five kilometres away. In those days, barely a few thousands would be present at the RSS function. In one corner of the Diksha Bhoomi ground there was a Buddhist mandir, but what interested us most was the fact that all around the ground there were hundreds of bookshops selling literature – on Ambedkar (ism), Buddhism and Dalit literature. While speeches would be taking place most present would be browsing the book stalls and interacting with others from afar. In those days the government would make little arrangements for those in attendance. More than a religious gathering, it was like a Dalit Mela.

After receiving ordination from Buddhist monk Bhadant U. Chandramani, on October 14, 1956 in Nagpur, Dr. B. R. Ambedkar gave Dhamma Diksha to his followers. An important part of the ceremony was 22 vows taken by all new converts after the Three Jewels and Five Precepts. Some of the 22 vows included giving up one’s faith in Hindu gods and rituals and living life according to the Buddhist principles of Dhamma, not telling lies, having compassion for others, and standing up for the struggle for equality. These were administered to the 380,000 of his followers who were present.

Though Ambedkar died a few months after his conversion, most of the Mahars (the prominent Dalit caste in Maharashtra, to which he too belonged , and 70 per cent of the Dalit population in the state) converted to Buddhism.

While living in Nagpur’s biggest Dalit basti, Indora, and working amongst the bidi workers of Bhandara, I remember some workers who had made it their life mission to go from house to house in Mahar localities, explaining Ambedkar’s mission and convincing people to throw away the statues and photos of Hindu gods and replace them with those of Ambedkar and Buddha. The youth would enthusiastically take up the mission, but often the elderly would be resistant as from childhood they had been indoctrinated into Hinduism.

Yet, if we look at the Brahminical influence on even the converted Dalits, according to Ramesh Sakpal (a Mayanagar youth of the 1970s now a retired employee of the Railways) about 70 per cent of Mahars celebrate the major Hindu festivals and even many keep photos of Hindu gods in their inner rooms, while Buddha and Ambedkar are in the outer rooms. This was corroborated by his wife Asha and daughter Dipti, while the latter added that many of her friends are non-Dalit Buddhists, most of her Dalit contemporaries (younger generation) know little about Buddhism.

Besides, after Ambedkar’s conversion to Buddhism, the Dalit Buddhists of Maharashtra have divided up into numerous factions, thereby weakening the reform trend. Soon after Ambedkar’s death, B.C.Kamble formed the Buddha Shasan Sabha, a more rigid form of the religion and mostly having influence amongst the Konkan Mahars. The most prevalent form is the Bharati Baudh Mahasabha, under whose auspices most marriages, deaths and other functions are conducted. Then there is the Triratna Maha Sangh and the Trailokya Maha Sabha. All these follow Ambedkar and recite the three Buddhist Slokas and the five Panchasheel. The slokas are: Buddham Sharanam Gachchami, Dhamma Sharanam Gachchami, and Sangam Saranam Gachchai. The five are: will not kill, steal, tell lies, have intoxicants and sexual depravity. Some of the differences between these are as absurd as how the Ambedkar photo is placed vis-à-vis the Buddha murti. All of them place flowers around Ambedkar’s image but never on Buddha. When I asked why, they said Buddha is himself a flower.

Recently, some more cults have sprouted like that from Taiwan/China, called TAO, which makes no reference to Ambedkar and strongly believes in re-incarnation, which Ambedkar had opposed. They are focusing not only on Dalits but also others. They say their difference with the other factions is that the others merely recite the sloka which few follow or even understand, while they appeal to reason and try and convince people through discourse. They are not only vegetarians but do not eat lasan (garlic) and onions.

In the neo-Buddhist customs children at the age of about 7-10 are initiated into Buddhism. They have to stay at the Buddha Vihar for 10-20 days, their heads are shaved, they wear the chivar clothes that Bikshus wear, and eat only once a day at 12 noon. Of course, today not many follow this custom according to the Sakpals. In the TAO faction, the initiation is a whole day’s function.

Marriages are conducted by a Baudhacharya, who is anyone who can recite the scriptures and are part of civil life, unlike the Bikshus who are part of the monasteries/vihars and wear the chivar. At the ceremony, the couple have to wear white clothes (green sari worn in Hindu functions). There are different prayers for marriages, deaths, initiation, etc. While in neo-Buddhism the Baudacharya is supposed to accept willingly any ‘dan’ given, today they are, like the Brahmins, demanding a fee. In a marriage, the six vandanas are chanted and then the couple exchange malas. At the end of any programme, the Dhamma Palan Gatha is chanted.

Most visit the vihar on Sundays and Purnima days with the Buddh Purnima in May being an elaborate function. The various factions have their own rules.

If we look at Indian history from time immemorial, there have been vast movements against the Brahminical interpretation of Hinduism and the pernicious caste system. But with duplicity and brutality they were either able to destroy these movements or co-opt them. This was easily done as most of the reforms came from the lower castes while Brahminical Hinduism was pushed by the rulers and their henchmen who wielded authority and power.

When Buddhism came on the scene in the 5th -6th century BC, it attacked all the mumbo jumbo of the vedic religions and took up from the Lokayata (atheist and rationalist) tradition that had preceded it. It emerged at a time when the Kosala and Magadha monarchies reigned.

The newly emerged classes—the lower two varnas and the non-subjugated tribal communities—did not accept this ideology and the varna hierarchy with Brahminical superiority. The rise of the Lokayata, Mahavir, Buddha and other opposing sects and philosophical systems was a challenge to this Vedic yagna-based Brahminism and varna-based hierarchy. These reform sects gained the support of traders and artisans organized into guilds and the semi-tribal kings and chieftains.

Later, with the consolidation of state formation with Mauryan rule (4th-3rd centuries BC), the reduction in the importance of yagnas and the consolidation of the agricultural economy, Brahminism itself underwent transformation in order to co-opt the non-vedic movements and philosophies. Yet, it was during Ashoka’s rule between 260 -230 BC that Buddhism spread far and wide throughout Asia by royal patronage. It was also around this time that the notorious Chanakya spread the regressive Brahminism. Then there was Manusmriti, consolidating the caste and Brahminical system in its crudest and most ruthless form.

Buddhism and Brahminism contended for influence over the next 8-10 centuries, but with the consolidation of feudalism after the Gupta rule and the aggressive organisation of Brahminism by Sankara, in the 8th century AD, Buddhism was viciously attacked destroyed or co-opted. By then, of course, it had already spread to East-Asia.

The rationality and justice in the Buddhist scriptures could never be suppressed for ever and it emerged in a new form as the bhakti movement in the 12th century, as a counter to the rigid Brahminism of the Sankara school of thought which ruled unchallenged for the next three-four centuries. Spanning a period from the 12th to the 17th century, the Bhakti movement was a popular opposition to the caste system. Most of the Bhakti saints were from the artisan castes, like blacksmiths, carpenters, weavers, although a few of the religious reformers were also Brahmins. A few, like Nandan (a Nayanar), Tiruppan (an Aalvar), Chokhamela and Sant Ravidas, were from the Untouchable caste. The movement also brought women saints into the limelight. The Bhakti movement had a moderate stream and a radical trend. The more radical stream, comprising of saints like Basavanna, Tukaram, Namdev, Kabir and Guru Nanak, criticized caste discrimination and Brahminical hypocrisy openly. Many were killed and most were ostracised.

This was followed by the non-Brahmin movement in the 19th century by Phule, Periyar and others. The Phule movement began with the founding of the Satyashodak Samaj (SS) in Pune in 1872. The rise of the SS took place in the context of a rise of Brahminical Hindu revivalism in western India – Peshwa rule - with its base in Pune. The main task of the SS was to make the non-Brahmins conscious of their exploitation by the Brahmins. Phule himself belonged to the Mali (gardener) caste, a caste involved in the cultivation of vegetables, and their trade in the vicinity of Pune. He fought against both the caste system and patriarchy. In Tamil Nadu the Periyar movement took on a similar but more militant form, attacking orthodox Brahmins. This movement still sustains in Tamil Nadu in the form of the DK organisations.

This was followed by the Ambedkar movement of Dalits in the 20th century. During the 1930’s, Ambedkar declared his intention to leave Hinduism because he believed it perpetuated caste injustices. After publishing a series of books and articles arguing that they do not believe that a person’s unfortunate conditions at birth are the result of previous karma, he finally converted to Buddhism. It was really the first time that the Dalits organised separately to fight untouchability generally practiced by all non-Dalits, including OBCs. The Brahminical ideology actually permeates all castes with each thinking they are superior to the others lower down in the caste hierarchy.

With the seeds of the Dalit movement sown by Ambedkar it was militantly revived by the Dalit Panther movement of 1973-74 which attacked all the symbols of Brahminism and promoted Buddhism and rational thinking. This was followed by four major Dalit revolts in Maharashtra and numerous smaller ones over the next three decades. The Dalit movement also spread to all parts of the country, particularly UP, the heart of Brahminical thinking.

But with the present Hindutva wave and the fierce Brahminical offensive most of the reform movements have themselves got brahminised and even the Dalit movement has been confined to certain Dalit castes and have got more immersed in identity/electoral politics negating Ambedkar’s and the Dalit Panther’s radical traditions.

Generally, the Dalit castes that have converted are those at the top of the Dalit caste hierarchy like the Mahars, Chamars, etc. In my experience the conversion to Buddhism and away from the feudal mumbo jumbo of Brahminism introduces a certain amount of rational thinking within the person that facilitates modern thought and culture. But without strong mass movements of the entire oppressed against the ruling classes, this trend of Buddhism and Ambedkar, like that of the varkari samaj of Tukaram (Pandharpur yatra), are slowly being co-opted. Anyhow, the Brahmans consider Buddha an avtar of Vishnu!

Yet, without the total annihilation of the caste system, democratisation of Indian society is inconceivable. Buddhism is just one of the tools in this change. Any radical change in India must build on the long traditions of the anti-brahminical movements through history from the Lokayata, Buddhist and Bhakti traditions to the more recent Jyotiba Phule-Ambedkar- Periyar movements.