OPS, EPS have joined hands to thwart Sasikala, but will their truce hold? 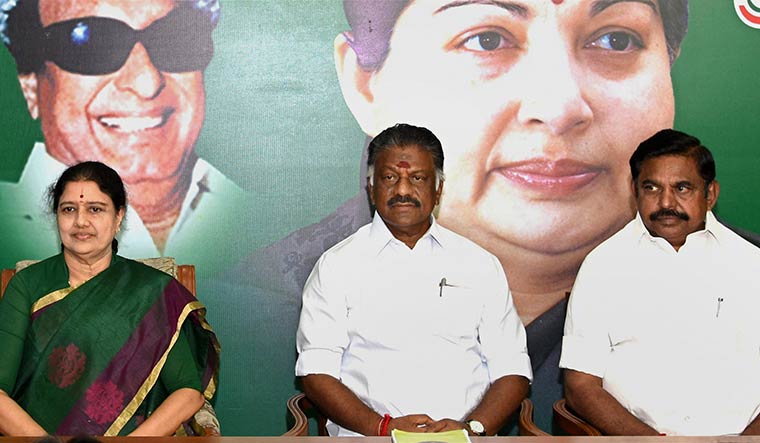 On May 29, more than four months after her release from prison, expelled AIADMK leader V.K. Sasikala broke the silence about her political future. She started releasing a series of voice clips of her phone conversations with AIADMK workers in which she could be heard reassuring them that she would soon return to active politics. “The party was built with great difficulty during the days of Thalaivar (M.G. Ramachandran) and Amma (J. Jayalalithaa). I cannot watch it wilt away,” said Sasikala.

Sources said Sasikala selected the candidates for her phone outreach from nearly a lakh AIADMK workers who wrote to her after her release. A handful of them were chosen after careful vetting by her team. As the clips became viral, AIADMK deputy coordinator K.P. Munusamy questioned Sasikala’s intentions and pointed out that she was not a party member. “All is well with the party. Someone wants to create confusion, but our cadres are very much aware of this,” he said.

As Sasikala released more voice clips, AIADMK leaders said those featured in the conversations were members of the Amma Makkal Munnetra Kazhagam (AMMK) floated by her nephew T.T.V. Dhinakaran. Sasikala responded by sharing the membership cards of the AIADMK workers she was talking to.

With Sasikala stepping up her political game, the rift between senior AIADMK leaders Edappadi K. Palaniswami and O. Panneerselvam is back in the spotlight. A week after the assembly elections, supporters of both leaders fought over the main parking space at the party headquarters, which was always used by Panneerselvam. When Palaniswami parked his car there, it was challenged by Panneerselvam’s supporters.

Later, there was a tussle between the two leaders over leading the AIADMK legislature party. Panneerselvam staked claim for the top post initially, but gave up after realising that Palaniswami had the support of the majority MLAs. “More MLAs are from the western zone and they won because of Palaniswami’s clout,” said a party source. But Panneerselvam’s supporters said the party fared badly in its southern strongholds because of Palaniswami’s decision to give 10.5 per cent reservation for the Vanniyar community.

In another audio clip, Sasikala criticised the growing dominance of the Gounder community from western Tamil Nadu in the party, putting the blame on Palaniswami. “He has side-lined leaders from other castes,” said Sasikala. 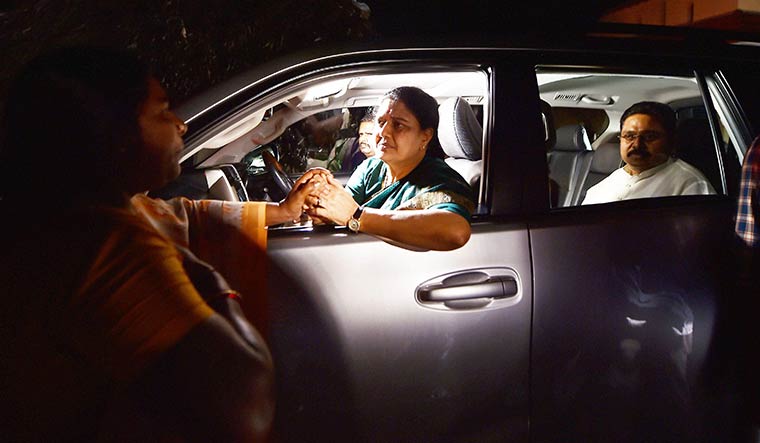 Palaniswami and Panneerselvam have so far put up a united front against Sasikala’s onslaught. In a meeting held on June 14 to select the AIADMK legislature party’s deputy leader and whip, a resolution was adopted, authorising the expulsion of those who spoke with Sasikala. Subsequently, the party ousted 16 members. A few days before the meeting, Palaniswami had called on Panneerselvam at a luxury hotel in Chennai where he was staying.

Sasikala, however, seems undeterred. She has reportedly reached out to the senior BJP leadership in Delhi through one of Jayalalithaa’s Hyderabad-based friends from the film industry. According to sources, Sasikala started talking to AIADMK workers only after ensuring that she will have a smooth return to the party, with the help of Delhi.

Sasikala, however, suffered a setback after a case was registered against her following a complaint by former law minister C.V. Shanmugam, who is the Villupuram district secretary of the AIADMK. Shanmugam alleged that Sasikala’s supporters issued death threats against him over phone and on social media. The case was registered on June 28, a day when a senior BJP leader holding a constitutional position had come down to Chennai from Delhi.

Another problem for the AIADMK is that the party has not conducted organisational elections after 2014-15. The Election Commission had asked the party to complete the process and file a status report by June. But the AIADMK has sought a six-month extension, citing Covid-19 problems. “The AIADMK requires more time for itself to reorganise, given the present confusions,” said V. Pugazhendhi, former spokesperson for the party, who was expelled last month.

As per the AIADMK constitution, organisational elections should be held every five years. As of now, most district secretary posts are held by former ministers. “Many of our branch secretaries and panchayat union secretaries either quit to join Dhinakaran or were expelled for anti-party activities. Those posts were never filled,” said Pugazhendhi.

The organisational crisis seems to have affected the AIADMK’s cadre strength, with its membership coming down to 1.1 crore from a high of 1.5 crore, when Jayalalithaa was alive. The party has not organised a membership campaign after 2018. K.C. Palanisamy, who was expelled in 2018, said AIADMK workers were facing a crisis. “Whether they are with Palaniswami, Panneerselvam or Dhinakaran, AIADMK workers do not seem to have a political future as of now. The party’s general council needs to be convened at the earliest,” said Palanisamy. He is one of the petitioners who moved court demanding elections to be held to the post of general secretary of the party.

While Palaniswami and Panneerselvam appear to have closed ranks to checkmate Sasikala, there is no guarantee that the truce will hold. Though the resolution against Sasikala was passed in Panneerselvam’s presence, he has been largely silent on the issue of her return. Equally interesting is the fact that Sasikala has extended an olive branch to him through her leaked phone conversations.

A source close to Sasikala said Panneerselvam had a soft corner for Sasikala and wanted her to return. “Her return can help him reclaim his lost clout in the party,” said a senior leader. Panneerselvam feels that Sasikala’s return will strengthen the party in the southern districts and reduce Palaniswami’s clout.

Though Panneerselvam is the coordinator of the party, Palaniswami makes all key decisions, which he is forced to approve. Panneerselvam does not have too many supporters within the party. In the 66-member AIADMK legislature party, 52 MLAs supported Palaniswami for the leadership post, while the rest remained silent.

Most AIADMK workers, too, think that Sasikala’s return will strengthen the party, although she is barred from contesting elections for six years. The Mannargudi clan has a plan ready, wherein Sasikala could appoint Dhinakaran to run the AIADMK as the party’s organising secretary. In such a scenario, Dhinakaran will merge his AMMK with the parent party, allowing aunt and nephew to take full control of the AIADMK. To bring that plan to fruition, however, Sasikala will need help from Delhi, given the trouble she is facing from the income tax department and the Enforcement Directorate.