The name is Khan 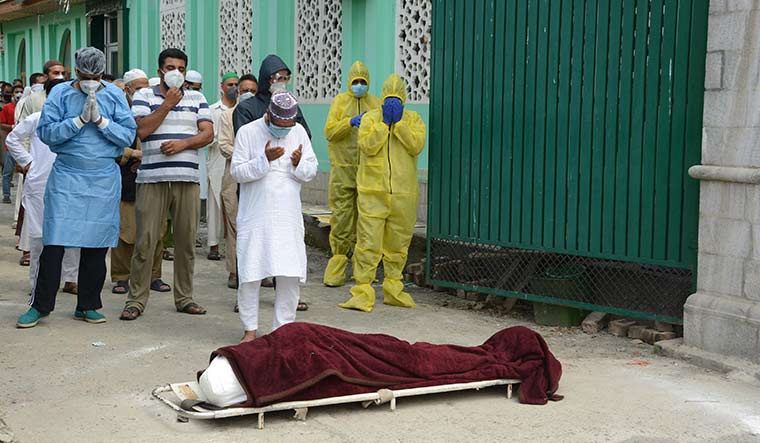 When Sajad Khan realised that burials were not happening as prescribed in Islam, he ensured compliance | Umar Asif

In 2013, Sajad Khan bought a machine to make bags for retailers and distributors. Khan, who also ran a travel agency, wanted to supplement his income. However, the machine remained in storage, owing to lack of space to set it up. A year later, when Kashmir was hit by the worst floods in its history, Khan cancelled the plan to make bags and started Houseful, a retail store at Qamarwari in Srinagar.

The business clicked. Khan got married and focused on growing his business. But, when Covid-19 hit Kashmir, he decided that he needed to do something to help and started making PPE kits with the old machine. He distributed them for free, primarily to doctors and health workers. One day, when he went to give the kits to the relatives of a woman who had died of Covid-19, he found that they were reluctant to bury her.

“I realised this was a big problem,” he said. “At that moment, I decided to volunteer to help bury Covid-19 victims.” He spread the word through health workers and also put up a post on his Facebook page titled Athiwaas (handshake) saying that he was available for the burial of Covid-19 victims. Within no time, he started getting calls for help. “Initially, I used to wait at the graveyards alone for the ambulances and health workers to bring the bodies, but later a few of my friends joined the effort,’’ he said. “The ambulances would bring the body to the graveyard and then we would lower the coffin into the grave.” There were cases when he wrapped the bodies at the homes of the dead and took them for burial.

The man and the mission: Sajad Khan | Umar Asif

He said it saddened him that those who died of Covid-19 did not get a proper burial. “We struggled to find a maulvi (cleric) to lead the prayers,’’ he said. “They were afraid that they would not be allowed to return to their localities if their neighbours got to know they had led the funeral of a Covid-19 victim.” He added that the gravediggers would flee the moment the body arrived.

Once, it struck him that, as per Islamic traditions, the body should be placed in the grave on its right side, facing the qiblah (Mecca). “After that, I ensured compliance with the rule,” he said. “I felt sad that the burials were [not] happening as prescribed in Islam because of the unprecedented situation.”

He recalled an incident when a man said that a deceased man should not be buried in that locality as he was not a resident of the area. Khan told him that the man's neighbours claimed that he was, and requested him to not obstruct the burial. But, the protestor did not budge and others soon joined him. There was a huge altercation, but Khan stood his ground and lowered the body into the grave. “When they told me to remove the body from the grave, I told them to do it themselves,’’ he said. “No one dared to go close to the grave for fear of contracting the virus.”

Khan's family got to know about his volunteering only when a local newspaper reported it. He said that was because only his mother was at home with him during the lockdown; the old lady was perhaps not keeping track of his activities as closely as his wife would have. “Before the Covid-19 lockdown, my wife took my two children to Delhi to make them feel better post the Article 370-related lockdown in Kashmir,” he said. “So, they were stuck in Delhi.”

He said that once the son of a rich man offered him money after Khan buried his father. “I told him I do it for Allah's sake, not for money,” he said. When the lad insisted on paying him, Khan responded by pointing to his own expensive sedan. “I don’t brag, but I felt compelled [to show him the car] at that point,” he said. The young man cried and said he wanted to bury his father himself, but his brothers did not cooperate. Kashmiris living in other states and abroad contacted him and offered money for the cause. “Since I had seen how people were suffering because of the loss of business, I gave them the names and addresses of the people they should help,’’ he said. “At least 25 families were adopted by people from outside Kashmir and that gives me immense joy.”

By the time the situation had stabilised, Khan said he had helped bury more than 170 bodies. “I continued to provide free PPE kits, sanitisers and masks from the little profit I made from my department store,’’ he said. “My store was among the ones which were allowed to stay open.” He added that he was surprised to see Houseful on the list of stores allowed to operate. “That is Allah’s mercy and reward for me,’’ he said with a smile.