Here are the silent heroes who cremate COVID-19 victims 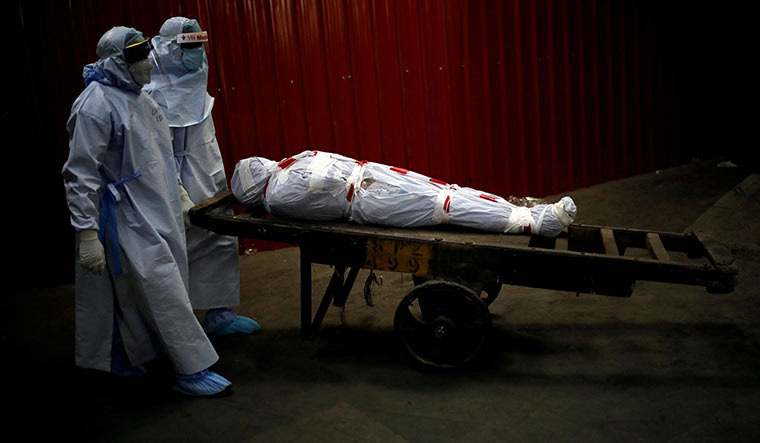 Naveen Kumar is used to experiencing chaos at nights. A few years back, a typical night meant getting home from a happening watering hole and hitting the sack around 2am. Loud music, drunk party-goers, flashy clothes and brawls were part of his daily life. Owning a high-end music system costing lakhs of rupees, Kumar not only rented his equipment but also doubled up as sound engineer and DJ at hundreds of parties and events in Hyderabad and its outskirts.

Now, the 32-year-old experiences chaos of a different kind at nights, like an incident that happened a few months back. “I was lying in bed when I felt something. The Aathma (spirit) of a dead person started pushing me. Later, I felt like someone was on top of me and scratching me. What happened that night was unforgettable,” said Naveen Kumar.

Naveen does not believe that it was a hallucination and is confident that he encountered paranormal activity. However, this did not deter him from what he was doing: Lift bodies of COVID-19 victims and oversee their cremation.

The COVID-19 pandemic, which, according to government figures, has claimed the lives of more than 1,500 people in Telangana, has brought together people from diverse backgrounds to discharge emergency duties.

Never in his life did Naveen imagine that he will work in a crematorium or a hospital. “I suffered a great financial loss and I was desperate for a job. Through an acquaintance, I got to know that there was a requirement for lifting and transporting COVID-19 bodies. I had no choice but to convince my family and take it up as I badly needed money,” he confesses.

Along with the job, came a heavy workload and long working hours, which took a toll. Naveen now lives in a room in the state-run hospital that is exclusively meant for COVID-19 patients, the Gandhi Hospital. According to him, there have been more than a half-dozen times when he fainted due to fatigue as he was on standby or working for 24 hours at a stretch.

Naveen is part of a private agency, which has been assigned the task of safe disposal of bodies of COVID-19 victims from government hospitals. The supervisor of the agency is K. Vijay Kumar, who also had no prior experience in handling dead bodies.

“I studied BCom computers and worked for a corporate company,” said Vijay.

Initially, Vijay worked as a data entry operator but later on got involved with ground-level work.

“My family was very much against my decision, and my friends kept away from me. But I had made up my mind. There was risk involved, but I also felt the need to do service,” Vijay said.

In Vijay’s own words, the first few months were very challenging as there was a lot of stigma attached to COVID-19. He narrated an experience that shook him.

“This was in the initial weeks of the pandemic. We took a dead body in a van to a crematorium on the city outskirts. A mob assembled there and objected to our entry. When we insisted on going ahead with cremation, they started pelting stones and attacked us. We were scared for our lives and somehow got out of the area with minor injuries,” Vijay recollected.

Another major problem faced by Vijay and his team was the process of disposing the bodies through various religious rituals. He said that he had a tough time getting permissions and convincing religious heads and managers of graveyards and crematoriums to allow them to go ahead with their work.

When the pandemic peaked, the dead bodies burned continuously at the only designated crematorium in Erragadda, in the west part of Hyderabad. “As the bodies kept coming in, there was a shortage of manpower. There were occasions when I had to lift the bodies and also sleep in an ambulance. To ease the queue of bodies, we had to use diesel to speed up the process. At the same time, we had to control the relatives of the deceased as they would break down or try to go near the bodies,” Vijay reveals.

For Vijay, his work of the last few months is the “biggest achievement of his life”.

“Money can be earned anytime, but I am happy that I could help in these crucial times. I have helped so many people that I have earned enough goodwill for this lifetime,” says Vijay, turning emotional.

A silent but significant contributor during the pandemic has been Rafiq, a daily-wage worker who is also well-versed with the procedure of efficiently cremating bodies. It is learnt that when many workers of crematoriums refused to do their regular duty due to the fear of contracting the virus, it was Rafiq who came forward and helped cremate bodies of dozens of Hindus affected by COVID-19 virus in the crematorium.

Then, there are IT employees who helped in respectfully peforming the final rites of those who passed away in private hospitals. Like Sai Teza, Bellam Srinivas and their friends who started an ambulance service, ‘Serve the Needy’ through which bodies of more than 150 COVID-19 victims were cremated or buried.

According to them, “A few from the US and other countries who had families here requested us to perform the last rites. We did it and also made them part of it virtually by showing the proceedings through video calls,” said Sai Teza. Their service was provided free of cost. The youngsters also witnessed some harsh realities of life as some of the families were indifferent to their dead ones and refused to give an honourable sendoff. There were also memorable moments.

“A poor family did not have money to cremate their loved ones. We took up that responsibility. The family members were full of gratitude and cried thanking us. Their response gave us immense satisfaction,’ said Bellam Srinivas.

The first official COVID-19 death in Telangana occurred on March 28, 2020. Almost a year later, the pandemic has brought in a lot of changes to Hyderabad and its people.

“I might have earned some money in this job, but bigger than that is what I learnt in these 11 months. I have seen so many bodies of the rich and the well-educated being dumped in a corner with no one to attend to it. For me, what now matters is to lead an honest and a pure life till the time I am alive,” said Naveen Kumar.