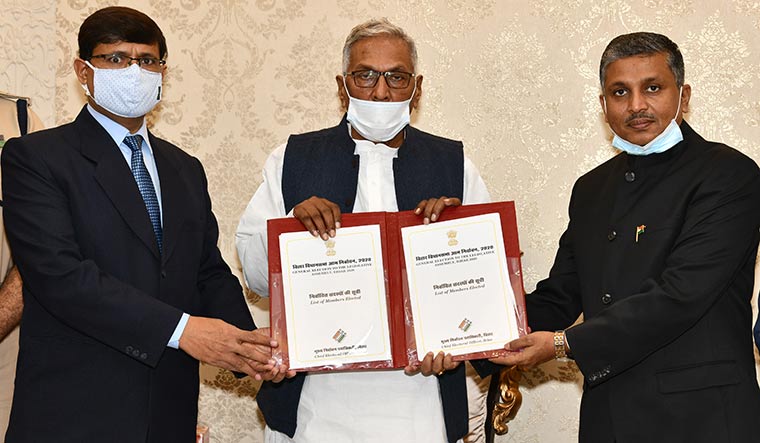 The elections to the Bihar legislative assembly were scheduled for October-November 2020. But, schools were shut after the pandemic struck, and more than 80 per cent of our booth level officers were school teachers. Getting them to the field was a mammoth task. Also, more than 90 per cent of our polling stations are schools. Since they had been closed for a long time, facilities such as toilets and drinking water needed a fresh look.

About 30 lakh migrants returned to Bihar. We identified three lakh people who were yet to be enrolled, and we finished enrolling 2.4 lakh of them before the elections were announced. The number of female voters as compared with male voters was 894 as on February 7, 2020, when the electoral roll was published. By the time the election process began, it had reached 904, quite close to the state average of 918. Even the elector to population ratio rose from 0.49 to 0.51. Altogether, we enrolled 18 lakh new voters in five months.

You cannot hold elections sitting in offices and homes. It involves mass contact. So it was a big challenge to maintain social distancing and ensure that Covid-19 protocols were followed. We identified grounds where a safe distance of six feet could be maintained between two people and chose only those buildings which had proper ventilation. The lists of these buildings and grounds were published in all the major newspapers of Bihar and also posted on our website to enable political parties or candidates to book them online for their campaign.

Another important challenge was postal ballot. It was first tried on a pilot basis in Jharkhand and then implemented in Delhi. But when scaled up in Bihar, which is the most densely populated state in the country, implementing it was difficult. It was made even more complicated because of Covid-19. The facility was available to voters who were over 80, had a disability or were either Covid-positive or Covid-suspect. It was not easy for our polling parties to go to the homes of people to first check if such voters existed, give them the forms and then collect them. We had to instil confidence and courage both among the voters as well as our own staff.

There was also the issue of verifying if the person eligible for postal ballot existed or not. Even if one [fake] postal ballot was cast, it would have vitiated the entire electoral process. I used to get nightmares about it. I would tell my officers down the line, time and again, that if there was one mistake, heads would roll. I told my returning officers that there had to be double checking, and we could not rely solely on booth-level officers. In every district, the health department had appointed nodal officers and block-level medical officers, who identified the patients and shared their names with the returning officer. It was the duty of the medical officer in-charge to get the postal ballot form filled.

We had to procure a mammoth quantity of items such as hand sanitisers, gloves, masks, face shields and room sanitisers. Then, all those items had to be safely disposed of. The Election Commission had strictly said that the disposal of the items had to be in accordance with the health department protocol.

Since the number of polling stations had gone up, the number of rounds of counting, which used to be 25, went up to 37. And add to that the postal ballots. That is the reason why counting just went on and on. Most of us did not take a single holiday and there were no weekends for us. We had a number of WhatsApp groups on which we coordinated. Also, there were a number of webinars.

Officers, our office staff and polling personnel got infected with Covid-19. At the same time, we had to deal with the issue of a large number of people deployed on election duty reporting sick. For example, in Patna, 3,800 people who were on election duty called in sick, saying they had Covid-19 symptoms. We had to make sure it was not an excuse to avoid field duty.

Many expected the polling percentage to be just about 40 per cent. When it surpassed 57 per cent, it left everybody stunned. It was higher than the 2019 Lok Sabha polls and the 2015 Bihar assembly elections.

We have shared our experiences with the four states and one Union territory that go to polls this year. I have participated in video conferences with all five [chief] election officers. I went to Tamil Nadu and Puducherry along with the Election Commission team and shared my experiences, especially the use of technology. We have shared with the other states the Covid-19 guidelines we followed and our Covid-19 guide for voters.

The credit for the successful elections in Bihar goes to the entire election machinery. It was an experience we will not forget for a long time.

As told to Soni Mishra.