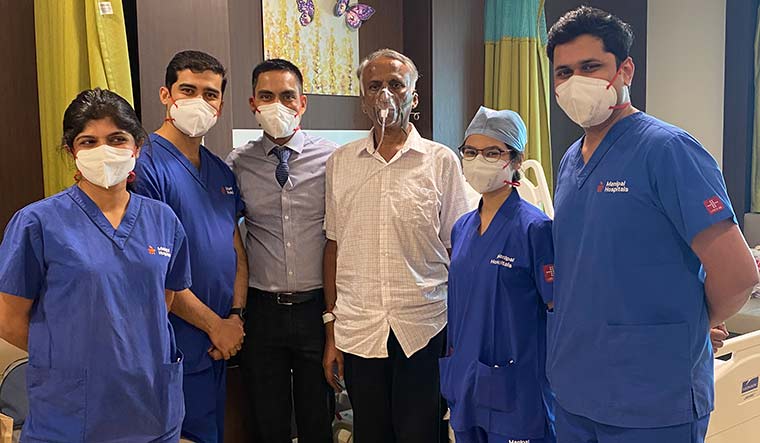 Venugopala M., 59, from HSR Layout, Bengaluru, tested positive for Covid-19 in September. He was discharged on January 30—131 days in the hospital, including 64 days in the intensive care unit. Dr Rajesh Mohan Shetty, consultant (critical care medicine), Manipal Hospitals, Whitefield, said that Venugopala's lungs were 100 per cent affected; 64 per cent or more is considered severe disease.

To make matters worse, he had a history of hypertension and developed severe Covid-pneumonia. “The patient’s oxygen level was low, and so, other body parts also started getting affected,” said Shetty. “He had low blood pressure and started experiencing drowsiness.” The respiratory problems took a toll on his kidneys and liver, too. “His chances of survival seemed bleak,” said Shetty.

As his condition deteriorated, he was placed on ECMO (extracorporeal membrane oxygenation—using a pump to circulate blood through an artificial lung into the bloodstream). “ECMO gives oxygen to the body and removes carbon dioxide,” said Shetty. “Once the lung recovers, we stop ECMO and the body takes over.” A case report published in the European Heart Journal claimed that a patient who was on ECMO for 49 days is the “longest ECMO Covid survivor in the world”. Venugopala was on ECMO for 56 days. “We’ve submitted the data to ELSO (Extracorporeal Life Support Organization),’’ says Shetty.

Notably, the medical team did it without a tracheostomy (inserting a tube into the windpipe through an incision in the neck), which is usually done in such severe cases. “We took the patient off the ventilator within a few days of initiating ECMO; it was able to manage the lung function,” said Shetty. Getting off the ventilator meant that Venugopala did not have to be sedated any more. He could eat and drink on his own and even talk to his family. “He didn’t have problems associated with long-term ventilation,” said Shetty. “That reduced the complication levels as well. There was no deterioration. His other body functions were normal. We were just waiting for his lungs to get better.” On the 40th day, his lungs showed signs of improvement.

Venugopala’s family remained hopeful and optimistic during the difficult time. They arranged money for the treatment by selling property. “We didn’t lose hope because we knew dad is strong-willed,” said his son Manoj V. Reddy, 30, who works as delivery lead at Acuity Knowledge Partners in Bengaluru. “We trusted the doctors and they kept us updated. When we were not allowed to meet dad, the doctors spoke to him and kept us posted.”

Shetty said the family's confidence in the doctors was key. “Even we did not know whether he would definitely improve and survive,” he said. “However, thanks to the family's faith in us, we tried as hard as possible, replacing what-ifs with even-ifs.”

Venugopala, a BEML employee, got his daughter Ruchika married on March 3, a mere 31 days after he was discharged. It seems like he certainly made up for lost time.