Many petals of the lotus 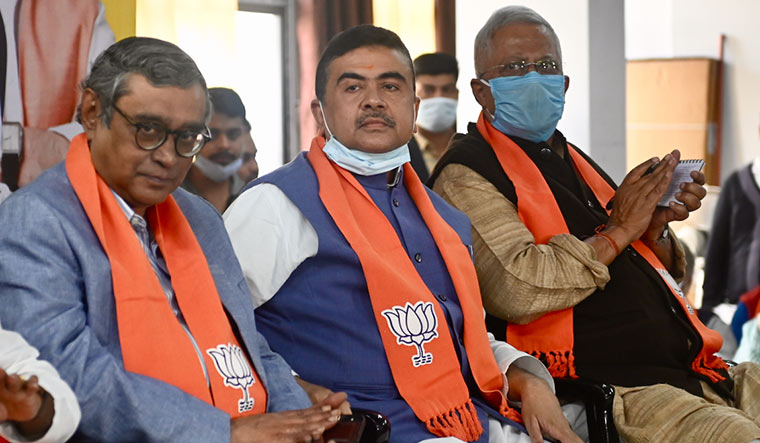 Rashtriya Swayamsevak Sangh chief Mohan Bhagwat has visited West Bengal five times in the past one year. Even at the peak of the pandemic, he visited Kolkata twice and held meetings with his pracharaks.

Apparently, the RSS feels that, of the states going to the polls this year, Bengal needs its attention the most. The BJP will go into the Assam elections with incumbent Chief Minister Sarbananda Sonowal; the party is well settled there. In Kerala and Tamil Nadu, and in the Union Territory of Puducherry, the BJP’s chances are slim. Hence, the many visits to Bengal.

Bhagwat’s message to his workers was simple—RSS pracharaks should not meddle with the BJP’s internal affairs. They should instead coordinate with two men at the state level if they have any grievance—state general secretary (organisation) Amitava Chakravorty and state party president Dilip Ghosh.

Chakravorty, the link between the RSS and the BJP in Bengal, was appointed to the post a few months ago. He was a trusted lieutenant of Home Minister Amit Shah and had held the same post in Odisha. The man he replaced, Subrata Chatterjee, was part of the old guard and was not happy that defectors from the Trinamool Congress were getting plum posts in his party. Bhagwat, who did not agree with Chatterjee’s way of thinking, intervened for his replacement.

Given its influence in such key decisions, would the RSS accept a non-Sangh leader as chief minister if the BJP routs the Trinamool in the upcoming state elections?

Yes, said a top RSS source, but only if the BJP is short of a majority and needs help from potential defectors. Said a senior BJP leader and lifelong RSS member: “The RSS does not interfere in the day-to-day business of the party. It helps the BJP during elections with all its affiliates. However, it does have veto power.”

Dilip Ghosh comes from the RSS. None of the other rumoured names for the post of chief minister—recent entrant Suvendu Adhikari, cricketer Sourav Ganguly and journalist-politician Swapan Dasgupta—are connected to the RSS.

Adhikari had a short stint with the organisation in his teens, but till a few weeks ago, he was a heavyweight in Mamata Banerjee’s cabinet. After he joined the BJP, he was appointed chairman of the Jute Corporation of India, which can be interpreted as an indication that he was not being considered for the chief minister’s post.

There is also talk that the RSS might back retired governor Tathagata Roy or Shah-confidant Anirban Ganguly, who is director of the Syama Prasad Mookerjee Research Foundation.

Of the lot, everyone except Sourav Ganguly, who recently had a heart attack, is on the field against the Trinamool. The buzz around Ganguly joining the BJP intensified when he met Bengal Governor Jagdeep Dhankhar and then Shah in Delhi in late December. However, even if he joins, he has no experience in politics to qualify for the top job.

The other Ganguly is also a newcomer in Bengal politics. It is said that he briefs Shah on Bengal’s history and culture. Party workers in Bengal do not relate to him.

Swapan Dasgupta, too, has little experience in Bengal politics, and is currently working on drafting the party’s manifesto and monitoring its publicity campaign in the state. A national BJP leader called him an erudite person with a great vision who, however, lacked political experience. “He is Oxford educated and often cannot speak in Bengali for long. That would weaken his connection with the rural base and the party workers,” said the leader.

Tathagata Roy, the former governor of Meghalaya and Tripura, is not too popular in the party, but the RSS has supported him for a long time. His tweets, even when he was governor, were laced with “communal aggression”, which angered a lot of people. Some called him the ‘Donald Trump of India’.

BJP and RSS sources, however, said that he was well-educated and had a good knowledge of governance. He had been a chief engineer of the Kolkata metro and had taught engineering at Jadavpur University before jumping into politics. He enrolled in the RSS but could not complete its three-year training course as he was made the BJP state president.

He has had a long career and knows how to deal with the bureaucracy from his Indian Railways days. Moreover, he is known to be close to Prime Minister Narendra Modi.

Despite the many boxes he checks, it is still an uphill task for Roy. He is 75, and the BJP had seen negligible growth in Bengal under him. However, as one of his staunch supporters said, “[Karnataka Chief Minister] B.S. Yediyurappa is three years older than Roy. If America can embrace Joe Biden, why can’t Bengal do the same with him?”

The speculation aside, it does seem that Ghosh is the frontrunner for the job. An RSS leader in Kolkata said that, when he was a vibhag pracharak, Ghosh’s job was to ensure discipline in the RSS. “He dealt with highly committed people and created his own group in the organisation,” he said.

The leader also revealed that Bhagwat had told Ghosh early last year: “Dilip-da, do not worry. It will be smooth sailing for you.” Following that, Ghosh had a sudden makeover. He became more aggressive on the ground and got more public attention. Roy even tweeted pictures of Ghosh, in full gear, playing golf.

Ghosh’s sudden elevation made it seem that the party bigwigs were considering only him for the top job. Even though the RSS does not meddle with party affairs, a leader recalled how it had sidelined L.K. Advani in 2005. He had praised Muhammad Ali Jinnah while on a visit to Karachi, and the RSS ensured his resignation as party president. Atal Bihari Vajpayee and others had spoken on Advani’s behalf, but could not convince the hardline RSS chief K.S. Sudarshan.

“I fully endorse the idea that no one should be projected as the chief minister candidate in Bengal,” Roy told THE WEEK. “We have followed this rule in Uttar Pradesh, Haryana and Tripura, and in many other places. The top level of the party has to [discuss] the likely candidate. I trust the party has done that, but I am not privy to it. I place myself at the disposal of the party. I am personally on good terms with all of these people.”

A BJP leader said Ghosh might form a strong team, accommodating all the important defectors. “That would be a dream cabinet,” he said.

The BJP had done it in Tripura in 2018. Several Congress leaders who had defected to the BJP were given cabinet posts after it won the state elections. Two years later, most of them were out of the cabinet.