The show went on

Sports returned. The spectators did not. What happened next did not shock us

As sports fans, we often get carried away. We tend to forget that, just like us, the athletes on the field are working professionals. We have had reminders from them, too. Allow me to quote the great Muhammad Ali: “It’s just a job. Grass grows, birds fly, waves pound the sand. I beat people up.” Or perhaps I could interest you in a Mario Balotelli quote: “When I score, I don’t celebrate because I’m only doing my job. When a postman delivers letters, does he celebrate?” Classic.

They are just doing their jobs. And we, who sit in the galleries, marvelling at their superhuman abilities, often pay through our noses for the privilege of doing so. If you had someone paying you a million dollars to watch you work, would you be nervous that you do not disappoint your spectator or be motivated to give him the best display of document filing he has ever seen? Or would you not care at all?

When the spectator was missing from the stadium for a large part of this year, were we surprised that sports could go on without us? Sure, art needs an audience. But how intrinsically important is the spectator to the arena where the best fight it out to emerge victorious?

The question is really how much does the sport need the live spectator, rather than the other way around. Because, the live option really is not much of a dealbreaker for a generation that has grown up with access to everything. A majority prefer the comfort of their homes, with the value-adding commentary and repeated replays to enjoy a game. Ah, to crack open a cold one, sit back and yell at the TV screen while your neighbours grumble. 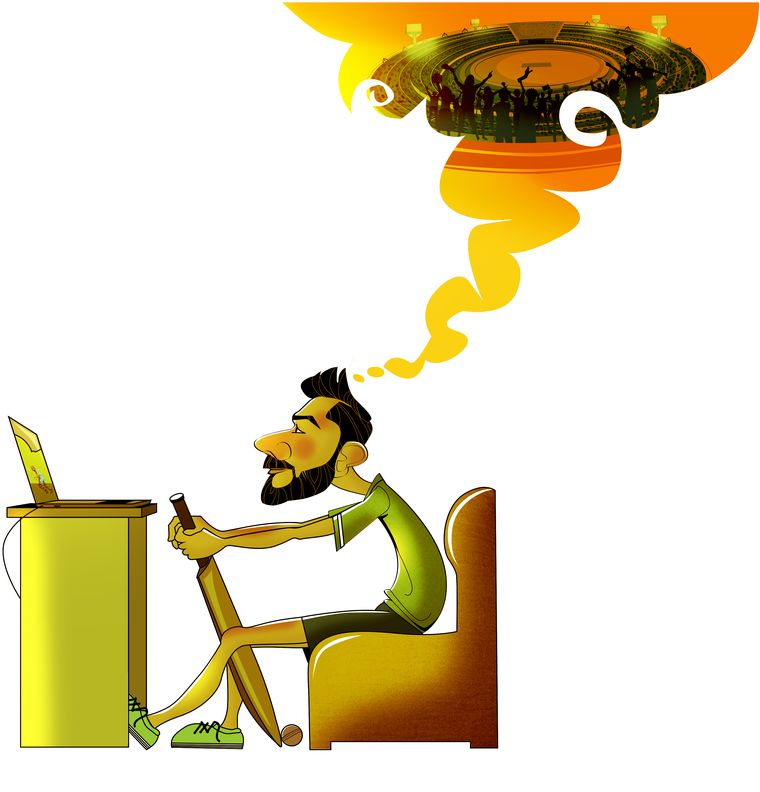 Granted, the match day atmosphere is more thrilling for some. You get to meet strangers and you bond over a common interest. Conversely, you meet a stranger and the both of you have to be pulled apart after you threw a sandwich at his face for insulting your team. Never a dull day. But not everybody’s cup of tea.

But what about the players? Barring the economics of it, did the absence of fans change anything for them?

When organisers agreed they needed to “recreate” the fan culture in stadiums for the benefit of the athletes, some felt it was an ominous sign of a dystopian future where the flesh-and-blood fan was no longer needed. Cardboard cut-outs, robots, massive tifos and banners with messages replaced us.

And, as if we did not have enough screen time in our daily lives, not only did fans have to spend more time in front of their devices, but players, too, had to put up with massive screens installed in the arena to show fans supporting them from home. Did all this help the players? Your guess is as good as mine.

Yet, there were times when players would have welcomed some instant appreciation. The cricketers at this year’s IPL must have been reminded of what it was like playing Test cricket in nearly empty stands. Smacking the ball into the stands certainly sounds different in front of a packed house.

For stars like Virat Kohli and Cristiano Ronaldo, who thrive off the energy of a crowd, they would certainly have missed both the abuse and adulation. As did the 30-something-year-old NBA players who jumped around and pulled faces at each other like teens to bring the “energy” that was missing in stadia.

For those of us watching from home, how many of us envied the audio engineer whose job it was to press the right button for the appropriate canned crowd noise? Surely, it reminds us of the laughter tracks in the sitcoms of old! An “ooh” over here, an “aah” over there, the cheers without the jeers as Bayern Munich ran Barcelona ragged. (The jeers are an essential part of it, too, Mr Producer!)

The only way players were receiving their daily dose of heckling was through social media—slicing through the sanitised and safe bio-secure bubbles. One can picture Novak Djokovic checking his Twitter feed every night before bed, just to indulge in some soothing verbal volleys aimed at him for one of his recent public brain farts.

And since broadcasters are giving us a “feel” of the stadium with the artificial noise, would it be too much to ask them to give us more control? Maybe give us options to trigger a frustrated-looking Jose Mourinho with some banter that blares out through the loudspeaker next to him. Or to start a virtual Mortal Kombat brawl with a fellow spectator as Khabib Nurmagomedov took a breather between rounds in his final UFC battle.

Nevertheless, the lack of spectators meant players in team sports could hear each other well. As viewers, it was heart-warming to listen to the different languages spoken on the field…. Until you hear all the cussing that goes on between players and your kid asks you what THAT word means.

All said and done, we are glad that sports returned. Because in a year when the Olympics was cancelled, we had to suffer the gymnastics of David Warner’s and Robert Lewandowski’s horrendous TikTok videos. Like watching that friend try really hard to pull off a (cringeworthy) dance move at a party, you feel like pleading with these sports stars to stop!

But remember, we fans are not the centre of this universe. The pursuit of sporting greatness will go on with or without us. So, whether sports returned on a screen or at the ground near you, keep the banter civil on social media. Unless you enjoy being heckled when you punch in the wrong figures at your work desk.

Gamers, how many times have you gotten so absorbed in your game that you had
become oblivious to things around? Formula One driver Charles Leclerc can relate.
During the lockdown, the Ferrari star was so engrossed with proving his simulation-racing skills on Twitch one day, that he did not hear the doorbell or his phone as his girlfriend waited outside their Monaco apartment. While live streaming, he suddenly exclaimed and excused himself. On returning, Leclerc said, “So my girlfriend had to subscribe to my Twitch channel to tell me that I had to open the door, so I gained a subscription. I’m so happy.” Sadly for him, she only subscribed for a month.