Women and people of colour have picked Biden for president 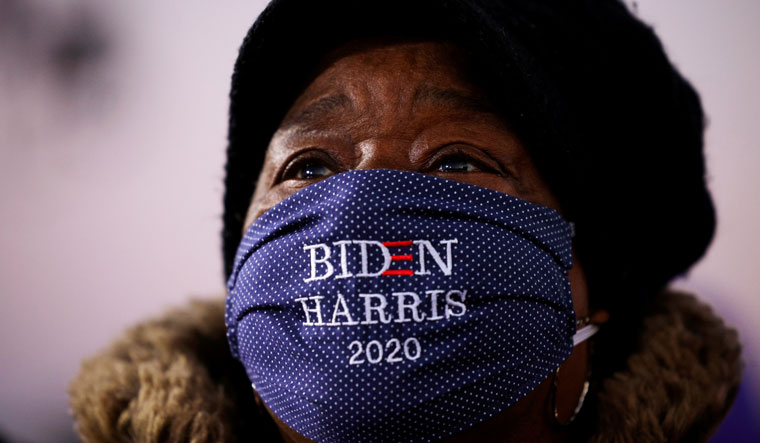 Long lines outside polling stations. Trumpers in speeding vehicles flashing weapons. The White House fenced off. The Empire State Building, upmarket couture stores and downtown small businesses boarded up. That’s what election week looked like in the US. Yet, through the daunting imagery, you saw Biden voters everywhere. Armed with earphones, energy bars, water, folding chairs, nail and hair clippers, and fully charged cellphones, people waited in line for three to eleven hours to cast their vote. Their message to the incumbent president, said Amy Cantrell from Georgia: “Donald J. Trump, you’re fired.”

Since he hit the campaign trail, Joe Biden notched a stable national lead in the much-awaited dust-up of the Trump administration. He campaigned frenetically until the last day in Pennsylvania, dispatched former president Barack Obama to Florida, vice president candidate Kamala Harris to Georgia and other surrogates to different swing states. Known to make deals across party lines, Biden was able to leverage his skills to woo prodigal voters back to the Democrat fold, reclaiming Michigan and Wisconsin. In doing so, he successfully rebuilt the democratic “blue wall” Trump took down in 2016.

In Washington, DC, first-time voter Neha Dhwan watched as Trump called India “filthy” and Biden spoke of the contributions of Indian Americans. Undecided until then, she voted for Biden. Prior to the election, a YouGov Poll indicated 72 per cent of Indian Americans who planned to vote backed Biden, against the 22 per cent for Trump. And they did.

But there loomed the spectre of Republicans pulling a Jim Crow 2.0. Jim Crow laws enforced racial segregation in southern United States in the late 19th and early 20th century. Under Jim Crow 2.0, there were voter roll purges, poll closures and lawsuits requesting that certain mail-in ballots not be counted. “The kind of energy that has gone into voter suppression is unbelievable,” said Bay Area media personality Glynn Washington. “To me, as to many others, this election is not so much about a Biden win (or loss) as much as it is a referendum on Trump.”

Representative Ilhan Omar, who has often been the object of Trump’s ire, delivered Minnesota for the Democrats. Biden outscored Trump 52.6:45.4 per cent. At a voter interaction attended by THE WEEK, she had cautioned: “Our vote is so powerful. And that is why they are fighting so hard to limit our ability to vote. We want this election to give us the result where we can have love give us the last word.”

Memories of being turned away from the polls in 1945 for being a black woman fresh in her mind, Letitia Washington Plummer, 98, dropped off her mail-in ballot in person in Houston. After young voters and people of colour saw their ballots rejected at higher rates, Biden’s team pushed for in-person voting. On D-Day, as per ABC Exit Polls, black men voted Democrat 80:18 per cent while black women voted Democrat 91:8 per cent.

With these numbers, it is surprising the Democrats did not make more gains this election. An African American Research Collaborative Poll held before the election in battleground states showed that while 35 per cent of 18- to 29-year-old blacks did not always approve of Trump’s policies, they liked his brusque anti-establishment persona. In Democratic primaries, older black voters had sided with Biden and those under 30 favoured Bernie Sanders.

Tony Bennett, 24, became a reluctant convert to team Biden, no longer able to handle Trump’s racist rants. The bartender voted Trump after Sanders was denied a ticket in 2016. “We are more pragmatic and focused on ground issues,” he said. “Trump was voted to shake the economy up and DC. I think he has done both.”

Biden’s roadmap to the White House travelled through Latino territory, too, especially Arizona and Florida. Latinos make up the second largest eligible voting bloc this year. As per exit polls, Latino men voted Democrat 61:36 per cent and Latino women voted Democrat 70:28 per cent.

Julian Ricardo Varela, who founded Latinorebels, a cohesive media platform for the Hispanic voice, however, said, “The Biden campaign missed an opportunity to make a targeted investment with Hispanic voters on ground, especially in key states like Florida. And it could very well come back to bite them.” With Trump making big gains among Latinos, Biden lost Florida and Texas.

But Trump’s mishandling of the pandemic, which has affected the Hispanic community disproportionately, may have helped Biden prevent further losses. Said Florida voter Isdiro Rodriguez: “We cannot survive another year of not having a plan to handle Covid-19.” Rodriguez took inspiration from Alexandria Ocasio-Cortez, who retained her New York seat. At a voter interaction, Ocasio-Cortez had emphasised: “It is ok to say Joe Biden is not perfect, and [still] support him” and that “given the stakes in this election, I am casting this vote as in solidarity with our marginalised and vulnerable communities.” Another reason why Rodriguez voted for Biden was his choice of “a woman running mate” in Harris, the first Black woman and Asian American named to a major presidential ticket.

And, it is women who are digging their heels in and raising their voices. For Orlando podcaster and “funnybrowngirl” Shereen Kassam, trolled for being Muslim, voting Biden was still not about race or religion. “My top concern is women’s reproductive rights,” she said.

Infuriated by Trump’s misogynistic appeal to women voters in Michigan—“We’re getting your husbands back to work.”—Beckah Durang mailed in her ballot in favour of Biden. An out-of-work yoga teacher, she cited an August-September National Women’s Law Center report about 1.1 million workers dropping out of the labour force. Of these, 8,65,000 workers were women, and it was dubbed America’s first “female recession.”

Julie Oliver, the Democratic candidate for the US house of representatives from Texas’s 25th district who lost to multimillionaire Republican Roger Williams, understands. “It’s in the interest of a very small economic elite—like Donald Trump and Roger Williams—to keep us divided while they continue to enrich themselves,” she told THE WEEK. “One message that resonates with all voters is our strong anti-corruption platform and the message is finally hitting home.”

To many Biden voters “Trump has become the swamp” and that’s why they rode with Biden.