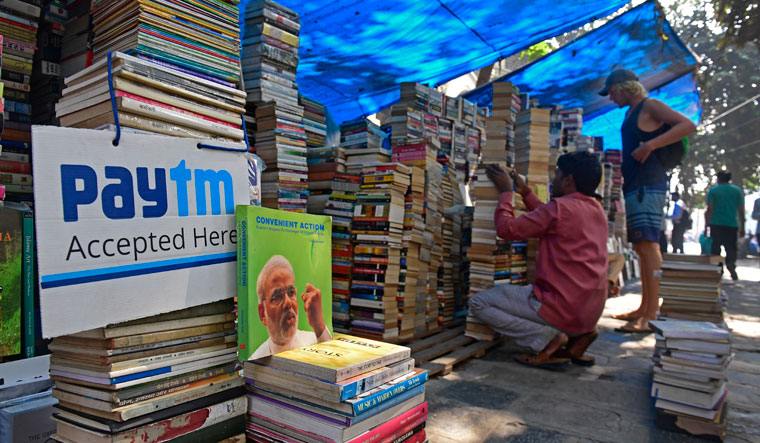 On top of the game: Even small businesses are now using apps like Paytm | Amey Mansabdar

An electrician in Mumbai, Ashok used to queue up at a post office to send money to his family back home in a village in Bihar. Now, he transfers money through an app in his smartphone. Thanks to the unified payments interface (UPI) developed by the National Payments Corporation of India, his relatives can simply walk into a neighbourhood grocery store and withdraw money through an app-based product provided to the merchant by a fintech firm. “UPI has become a very convenient method for sending and receiving money,” says Ashok.

The National Payments Corporation of India (NPCI) began pilot-testing UPI in April 2016. After a slow start, Indians rushed to embrace UPI as the go-to method for financial transactions, from paying bills to buying shares. In August this year, UPI clocked a record 1.5 billion transactions worth Rs2.85 lakh crore.

The pandemic has helped the growth of the platform—thanks to social distancing norms, people have been increasingly shopping online and choosing UPI apps for payment. Since its inception, UPI has raced past credit and debit cards to become the fastest platform to hit one billion transactions a month.

In 2019, UPI transactions surged 188 per cent to touch 10.8 billion, according to the payment service provider Worldline. The transactions were worth Rs18.36 trillion, a three-fold jump over 2018. Debit and credit card transactions, too, grew in the same period, but their combined transaction value was less than Rs14 trillion. 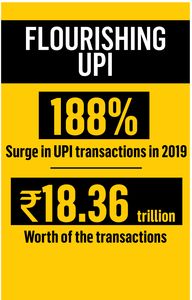 So how does UPI work? It is essentially a digital platform that links a bank account to a smartphone app, allowing the transfer of money between two parties and their bank accounts. Apps such as Google Pay, PhonePe, Paytm and NPCI’s own BHIM allow users to send and receive money through a few taps on their smartphones.

Earlier, NEFT (national electronic funds transfer) was the preferred means of account-to-account money transfer. But it used to work only on business days and had a cut-off time of 7pm on weekdays, until it was made available 24x7 on December 16 last year. UPI has no time restrictions; it has always been available 24x7.

“UPI is built for the smartphone generation,” said Harshil Mathur, CEO and co-founder of the payments platform Razorpay. “It is also extremely simple for a new user to learn. Costs are low for a merchant; almost free. From that perspective, UPI has a lot of value.”

“UPI is the world’s first truly interoperable platform built on mobile-first principles,” Hemant Gala, vice president, payments and financial services at PhonePe, told THE WEEK. “It provides a user with the ability to send or receive money instantly across the network. It is a highly safe, secure and convenient way to make payments. And it has made financial inclusion a reality by enabling instant money transfers and merchant payments in even the smallest towns in the country.”

UPI’s success has been a boost to fintech platforms. In March this year, NPCI allowed payment service providers to offer cash withdrawal facilities in shops. Since UPI allows players to create a user interface on top of the payment layer, an entire ecosystem of fintech startups is thriving.

Take Paynearby, set up by the financial services company Nearby Technologies Private Ltd. It allows neighbourhood retail stores to offer assisted digital financial services like Aadhar-based cash withdrawals, utility bill payments, insurance and mutual funds, and UPI payment services. “When you go to a kirana shop to buy grocery, you can withdraw money or just ask for a fixed deposit to be opened on the spot. Banking has got merged in the grocery list now and you don’t even need to go to an ATM for it,” said Anand Kumar Bajaj, founder and CEO of Paynearby, which clocks more than 10 lakh transactions now.

BharatPe, which focuses on merchants, offers a single QR code, enabling shop owners to accept payments from multiple payment apps. “Banks have completely [distanced] themselves from customer needs. That gap has been filled by fintechs, and that has only been possible with UPI as a layer in between,” said Ashneer Grover, co-founder and CEO of BharatPe.

Based on the cashflow generated by merchants using its QR code, BharatPe has begun offering them small-ticket loans. It has tied up with non-banking finance companies to lend more than 0175 crore.

But how safe is UPI? “It has enough safety factors built in,” said Mathur of Razorpay. “For doing a UPI transaction, you need a smartphone. It’s your smartphone and your pin. Even from a liability perspective, RBI has a strong set of guidelines to ensure that a customer’s money is not lost during a transaction.”

Last year, HDFC Bank warned its customers of an app called AnyDesk, which fraudsters were using to gain remote access to smartphones and steal banking credentials. Gala said PhonePe was investing in sophisticated, fraud-detection technology. “We score every transaction in real time for authenticity before allowing the user to authorise the same,” he said. “We also invest in real-time analysis of mobile numbers, devices, cards or bank accounts for patterns of abnormal behaviour.”

Buoyed by UPI’s safety and success, Google wrote in December last year to the US Federal Reserve, asking it to implement a similar, real-time payment platform. “We believe the right model for driving digital payments is through partnership between banks, governments and tech companies; through open and standards-based infrastructure like UPI,” said Caesar Sengupta, general manager and vice-president, payments, Google, last year.

NPCI itself has plans to launch UPI abroad. It recently launched its wholly owned subsidiary, NPCI International Payments Ltd, to internationalise RuPay and UPI. “Several countries in Asia, Africa and the Middle East have shown interest in replicating our model,” said Dilip Asbe, NPCI’s managing director and CEO, while launching the subsidiary.

In November last year, NPCI demonstrated a BHIM-enabled, QR code-based payment in Singapore. If made operational, it will allow people who have BHIM app to make payments in Singapore. “There is scope for enhancing global outreach of our payment systems,” the RBI recently said, “through active participation and cooperation in international and regional fora, and by collaborating and contributing to standard setting.”