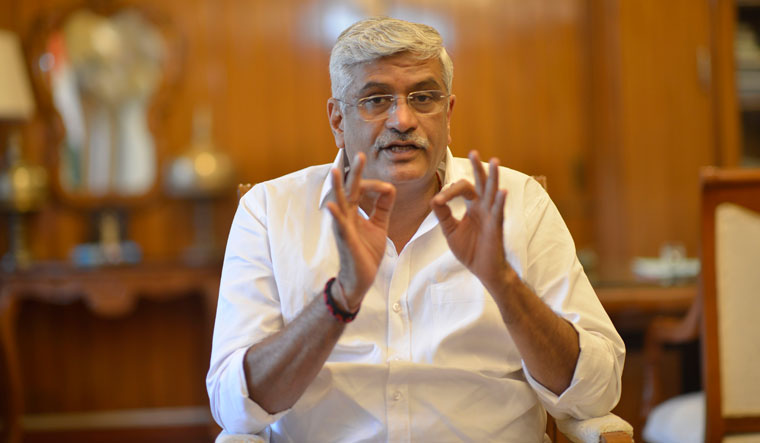 Har Ghar Nal Ka Jal (piped water in every home) is Prime Minister Narendra Modi's flagship mission in his second term. The new ministry that was formed by merging the ministry of water resources, river development and Ganga rejuvenation with the ministry for drinking water and sanitation, has a telling name—Jal Shakti or water as a force.

India is not deficient in water, however, its distribution across the country is not uniform. Despite the many rivers, agriculture still remains largely dependent on underground water. The water bodies, meanwhile, have gone into distress because of exploitation and pollution.

Under Jal Shakti Minister Gajendra Singh Shekhawat, the ministry is handling two big missions—a Rs20,000-crore endeavour to clean up and maintain the Ganga, and providing piped water to every home by 2024. In an interview with THE WEEK, Shekhawat speaks about the progress and the success stories so far. Excerpts:

Q/ Only 17 per cent of rural households gets tap water at home, as of last year. That is a shocking figure.

A/ When Narendra Modi became prime minister in 2014, less than 20 per cent of the population had bank accounts. Sixty crore people defecated in the open. Eight crore households did not have a cooking gas connection. So, is it shocking that in homes where there was no electricity, toilet or gas connection, there was no piped water?

The stunning bit is not the figures of 2014. What made the world sit up and take notice was the speed at which the Modi government has achieved targets with 100 per cent success—look at rural electrification or toilet construction.

Q/ You have a humungous task on hand. Are you confident of meeting the target by 2024?

A/ We have been working hard and in the last year, we have already brought piped water to another 2.24 crore homes (30 per cent coverage), despite the pandemic restrictions. We are providing one lakh connections every day. Goa became the first state with a functional tap in every home. Telangana is almost there with 98.5 per cent coverage. Across the country, already 52,000 villages have piped water in every home. There is still a lot more to be done. Not every state is progressing at the same speed. West Bengal has only 2.4 per cent coverage, Meghalaya 4.22 per cent.

Q/ What are the challenges?

A/ Sustainability of source [of water] and treatment and disposal of grey water are big challenges. The prime minister is clear that both the quantity and quality of the water supply have to be maintained. We have a commitment of providing 55 litres per capita every day. We have asked states to install sensor-based systems to monitor the two Qs. We are encouraging water testing by establishing and strengthening laboratories so any consumer can get the water tested.

We are also working on ways of treating used water in villages and the reuse of grey water in agriculture, industry if any, or recharging groundwater, so that the sustainability of source is ensured.

Q/ A recent report from the Central Pollution Control Board said that the Ganga's water quality did not improve during lockdown, unlike other rivers.

A/ I think the report has been misinterpreted. Our efforts have borne fruit. After the mission was announced, the ministry organised a rafting expedition from source to the mouth in 2015. We did a similar expedition last winter and the results were visible. One of the best yardsticks of a clean aquatic system is the riverine life it sustains, and we have seen fish, dolphins and other animals return to the river.

Another way of assessing a river is the amount of dissolved oxygen it has. I can say with pride that from the source to Haridwar, there is not even a drop of sewage discharge into the river. All the 4,600 villages along its path have been declared clean villages that have sewage treatment plants.

We took a year and a half to assess the work needed on the Ganga, since previous efforts to clean it were piecemeal and not sustainable. We have undertaken 352 projects [sewage and effluent treatment plants] on a hybrid annuity model, to ensure that the concessionaire runs it for the next 15 years, so that the plants will not be abandoned midway.

The Swedes have ensured that the Danube leaves the country cleaner than when it enters. The Germans have brought back to life the dead Rhine. It took the Germans 29 years and the Swedes 30 years. We are only four years into implementation. Also, our rivers are different. They are living entities. The number of people living on the banks of the Ganga alone rivals the population of Europe. Yet, today, I say with authority that the Ganga is one of the ten cleanest rivers in the world, of its length.

Q/ The country is facing water stress. Two years ago, a NITI Aayog report predicted that urban India would run out of groundwater soon.

A/ I do not want to delve into the report, but in 15 of those 21 cities, groundwater is a minuscule part of total water supply. But yes, there is a challenge, our dependability on groundwater is very high. Twenty per cent of the geographical area in the country is in the ‘over exploited’ or ‘exploited’ range for groundwater. This is a concern. The PM launched Atal Bhujal Mission last year, targeting the seven most vulnerable states. We are focussing on the demand side, instead of supply, and working on ways of water use efficacy through participatory water management principles. Since 89 per cent of water used in India is for irrigation, we are working on reducing this requirement through smart and micro-irrigation systems.

Q/ What is the progress on river linking?

A/ We have identified 30 links, and put five of them into the national perspective plan. We are coordinating with states to come on board and develop water-sharing understandings. The Ken-Betwa link is very close to some big announcement soon.