'Our only concern is our identity; we do not want Ladakh to be like Assam' 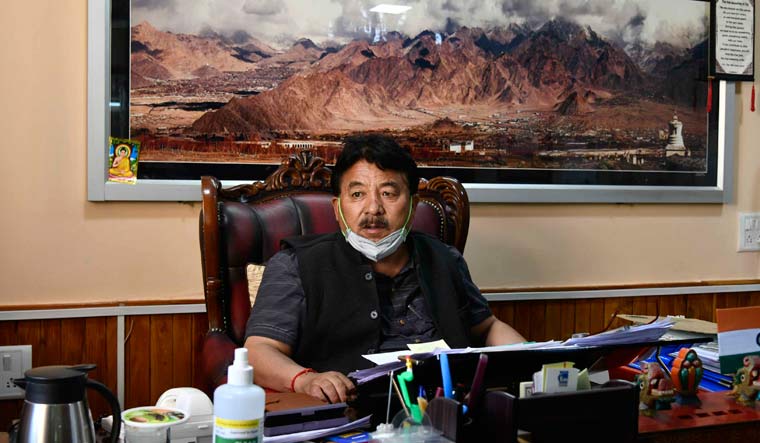 Gyal P. Wangyal heads the 30-member Ladakh Autonomous Hill Development Council and holds the status of a cabinet minister. He talked to THE WEEK on the changes that have come in Ladakh since it became a Union Territory, challenges ahead, Chinese incursion and more.

Q/It's been a year since Ladakh became a Union Territory. How do you see the development?

Despite its strategic significance (shared border with Pakistan and China), Ladakh has been the most neglected part of the country under the erstwhile J&K government. Infrastructure developmental work was absolutely on low priority for Srinagar-run government. After becoming Union Territory, Ladakh has got actually its identity. It is the foremost thing for us. For developmental work, Union government has already allocated Rs 6,000 crore for Ladakh. Earlier, having funds for the development was a big problem for us because of stepmotherly treatment by J&K. Now, we need to start from the scratch. We need to begin from zero unlike J&K, and it will take time.

Yes. Ladakh has always faced discrimination by the political class of Kashmir, who used to rule on us from Srinagar or in Jammu. We need to beg to J&K for funds, despite being largest in area, as Ladakh is 65 per cent while Jammu and Kashmir is only 35 per cent of total land area of the erstwhile state. And Leh district itself is 45,000 sq km. Development is to be done for the area not its people. Ladakh has a population of close to three lakh. J&K used to ask money from Planning Commission in terms of area, but while distributing, it was always on the basis of population. Due to this, Ladakh used to get only 2 per cent of the total budget of J&K. So, we had to face issues on the development as our area is vast.

Q/How has the development work progressed in the past one year in Ladakh?

Since, we have become UT, our budget has increased four times—Rs 232.43 crore for Leh and similar amount for Kargil district. But, it is our bad luck that due to COVID-19 pandemic, we could not utilise it. Due to the restrictions, no meeting of general council of the Ladakh Hill Development could take place in the last five months. So, no planning was made on the disbursement of the allocated fund. Now, we need to follow MHA rules for financial planning. Our biggest problem is availability of labour, as they come from Bihar, Chhattisgarh, Jharkhand, Madhya Pradesh and Uttar Pradesh and even from Nepal. There is a big uncertainty on return of these labourers to Ladakh. Now, we are afraid that whether we will be able to utilise this allocated Rs 232 crore for development.

Moreover, from October, winter will set in the state and it brings to halt all infrastructure work due to heavy snow. COVID-19 and tension on border with China have badly affected the development of Ladakh.

Q/Are you satisfied with the development on the border area in view of the Chinese incursion?

In 2015, there was a proposal from MHA of Rs 600 crore to develop the border area. Unless we provide basic facilities to residents of border villages, they will migrate. In recent past, hundreds of migrants have come down and settled in Leh. Union government could not implement its own plan of border development. Now, we are pushing to revive as it becomes important in terms of Chinese incursion. If we manage to stop migration, these people will always be the eyes and ears for the security agencies. With better road connectivity, border tourism can also be promoted in remote areas.

Q/How do you see the abrogation of Article 370 ?

To have a separate Union Territory was long-pending demand of people of Ladakh. The demand was legitimate on the various grounds—geographical, cultural and linguistic. Many Ladakhi leaders, including Kushok Bakula Rimpochee, have led the movement for the separation from J&K state. Thupstan Chhewang, former member of Parliament, who founded the Ladakh Buddhist Association that spearheaded the agitation, ultimately led to the setting up of Ladakh Autonomous Hill Development Council (LAHDC ) in 1995. But due to Article 370, we were not allowed to have separate status of Union Territory. Now, Modi government has removed Article 370 and both J&K and Ladakh have made UTs. With abrogation of Article 370, Ladakh should integrate the region fully with the rest of the country as an equal stakeholder in building the nation.

Q/Do you fear change of demography?

Yes. Fear of the influx of outsiders that would lead to a change in the region’s demography is very much there in every Ladakhi's mind. Now, anyone can settle here. With no special status, Ladakh will become open for all, especially in terms of real estate. That is why, we need protection of land. Domicile rules also need to be considered for Ladakh, too, if residents of J&K can get it. Essentially, the Ladakhi identity needs to be protected through safeguards. We don’t need everything defined under the Sixth Schedule of the Constitution. Based on Articles 244(2) and 275(1), the Sixth Schedule provides for the administration of tribal areas in the states of Assam, Meghalaya, Tripura, and Mizoram after setting up autonomous district and regional councils. But, we are asking for safeguards in employment, land, environment and heritage.

Q/What are the challenges ahead for Ladakh?

Q/How do you see the issue of nomads in Ladakh?

We have been constantly working on issue of pasture land for nomads. Earlier, we did not have the required fund. Now, we have no dearth of funds. Nomads on border villages suffer the most when it snows. So, we are creating a fodder bank and identifying pasture lands for them. We need to develop the border infrastructure as we are lacking it hugely. Lack of communication system is also an issue. Our executive councillors have made a couple of visits to the remote border villages after tension on the border with China and listened to their grievances.

Q/What is your take on incursion by Chinese military?

It is not the first time, Chinese have intruded into our territory. They have been doing it for the last five decades. Now, it has come to the limelight because our forces have shown firmness and retaliation on the border, which never used to happen earlier. There is a buffer zone, which was never contested, and both sides used to patrol. Earlier, we never objected to Chinese incursion. We cannot trust China. Ladakhi people are not scared of Chinese military.