The tussle between Mamata and BJP isn't about Covid-19, but about 2021 assembly polls 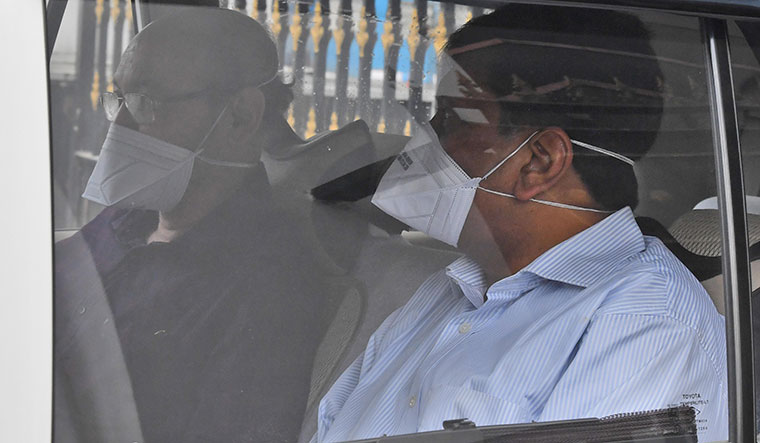 In March, Mamata Banerjee took the Covid-19 fight to the streets, distributing masks and drawing circles on the road to enforce physical distancing. But, for the past one month the West Bengal chief minister has been spending more time inside her Nabanna office in the red zone district of Howrah. Notices from the Union home ministry have been piling up on her desk. She is probably the chief minister whose political acumen has been tested the most during the pandemic and, in her case, the results have changed from positive to negative in two months.

And, Banerjee is miffed. During Prime Minister Narendra Modi’s conference with chief ministers on May 11, she accused Home Minister Amit Shah of being the brain behind the “politics” over the pandemic. “When something happens in Gujarat or an ordinance is declared to snatch away the rights of labourers in Uttar Pradesh, why don’t you question them? Why are you targeting Bengal and its people by sending notices?” she asked.

Shah has been firing notices through home secretary A.K. Bhalla. The first set of letters criticised the state government for violating lockdown norms. Banerjee had been visiting hospitals, quarantine centres, stadiums and markets, sometimes sporting a mask, sometimes not. Her visits to pacify people won her praise even from her detractors.

But as the number of Covid-19 cases grew in the state, Banerjee stayed put at Nabanna. On April 3, she set up a five-member committee to audit the Covid-19 deaths. The committee first examined the death of 105 Covid-19 patients and found that the virus had caused only 33 deaths. In other cases, the patients died of other factors and having Covid-19 was “incidental”, the committee said.

West Bengal BJP president Dilip Ghosh said that the state government was trying to hide the actual figures. “If the chief minister and her cabinet themselves did not follow lockdown rules, what could you expect? Twelve hospitals handling Covid-19 cases had to be shut as doctors and staff got infected,” he told THE WEEK. “The food, health and home departments have failed to perform.”

The Centre versus state tussle is now being played out at the bureaucracy level. An inter-ministerial Central team (IMCT), led by additional secretary Apurva Chandra, alleged that it was restrained from making visits or interacting with health professionals during its 10-day visit to the state. However, state chief secretary Rajiva Sinha denied the allegation. On April 24, Chandra wrote to Sinha questioning whether the formation of the audit panel was in line with the Indian Council of Medical Research guidelines and asked for the methodology adopted by the panel.

The IMCT reported that at the Chittaranjan National Cancer Institute and Bangur hospital a large number of patients in isolation wards had to wait for five days or more for their test results. “There is a danger of a Covid-19 negative patient acquiring the infection in the hospital awaiting his test result,” the report said. It also found that dead bodies were left lying on beds for at least four hours, before death certificates were issued. There was shortage of ventilators and testing facilities, too, it said.

On May 6, Bhalla wrote a two-page letter saying that West Bengal had the highest mortality rate in the country at 13.2 per cent. “This is a reflection of poor surveillance, detection and testing in the state,” said Bhalla. In another letter, he wrote that West Bengal had failed to resume the movement of goods between India and Bangladesh. As a result, trucks carrying essential supplies were stuck at border crossing points. Also, drivers returning from Bangladesh were denied entry and were stuck there. Bhalla said these issues had larger implications for the Indian government.

There has been an exchange of missives between Banerjee and Governor Jagdeep Dhankhar, too. The governor said it was time for the chief minister’s “tryst with reality”. Banerjee, in turn, reminded him of his “ornamental” position. Their bickering has now spilled over to Twitter and text messages as well.

Recently, Shah shot off another letter to Banerjee over her government’s failure to make arrangements for the return of migrant workers. The railway ministry tweeted that Indian railways had run more than 300 trains for states like Uttar Pradesh and Bihar, but it had received approval for only two trains from West Bengal till May 9. While West Bengal subsequently approved more trains, Trinamool’s Rajya Sabha member Derek O’Brien told THE WEEK that Shah was spreading half-truths to gain political advantage. “What we need is true federalism and genuine humanism,”he said. “The Centre, on the other hand, has made a hotchpotch of handling the crisis at the national level. A 21-day lockdown with four hours of notice? They abandoned the migrant worker.”

Banerjee is now in damage control mode. On May 12, she replaced health secretary Vivek Kumar with Narayan Swaroop Nigam, who was in charge of transport. In April, she had replaced food secretary Manoj Agarwal with P.A. Siddiqui over allegations of anomalies in the public distribution scheme. Ghosh said that Banerjee was trying to shift blame on the bureaucracy for her poor performance. O’Brien, however, said, “We are doing well, but there is no place for overconfidence.”

Both the BJP and the Trinamool have realised that the 2021 assembly polls will be fought under the shadow of Covid-19. For the state and its people though, what matters now is a victory over the virus.