THE WEEK was in China when the novel coronavirus outbreak began Bail me out!: A man walks in a nearly empty street in Beijing | Getty Images

January 18. Zhang Lifei could not believe his ears. The 35-year-old tour guide from Henan province in central China gasped incredulously when I asked about the novel coronavirus (2019-nCoV) outbreak in China. I was worried because a few deaths had been reported.

“Coronavirus, what’s that! I don’t know about it. You must have been misinformed,” he said with a smirk. I shrugged; half in relief, half unsure.

January 20. It had just been two days since Zhang pooh-poohed my concerns. But the past 48 hours had changed China and Zhang. Today, he was a bag of nerves and was hurriedly scanning through Chinese news web sites on his phone. “What the f***. The government says there are less than 10 deaths, but I am not buying that,” he said in exasperation.” This virus has to be controlled. Somehow. I hope this does not escalate further. Please pray for us. And you guys stay away from the crowd till you return to India.”

January 21. Just days ahead of the Chinese New Year, when THE WEEK’s Photo Editor Sanjoy Ghosh and I reached Tiananmen Square in Beijing, the usual hustle and bustle was missing. The few scattered tourists were all wearing masks. The tension in the air was palpable. I saw a woman chiding her young daughter who was trying to remove her mask.

January 22. We visited the Silk Street Market in the Chaoyang district of the city, which has close to 2,000 retail vendors selling local specialities. Our taxi driver was not wearing the mask. I asked him about it, and he gestured that it was in the glovebox. Beijing is known for its heavy traffic. But, on that day, there were fewer cars on the roads and the pavements were emptier. Most foreigners come to Silk Street Market looking for a bargain, so the vendors are pushy and ready to haggle. But, today, they were hooked to their phones, possibly trying to find more about the mystery disease that had hit their beloved nation.

On the sixth floor of the market we visited the Hotel Mirch Masala, which is owned by a Pakistani, but managed by Sachin from Paharganj in Delhi. “We are getting very few customers these days. I hope the situation improves. Or else our business will get affected,” Sachin said. 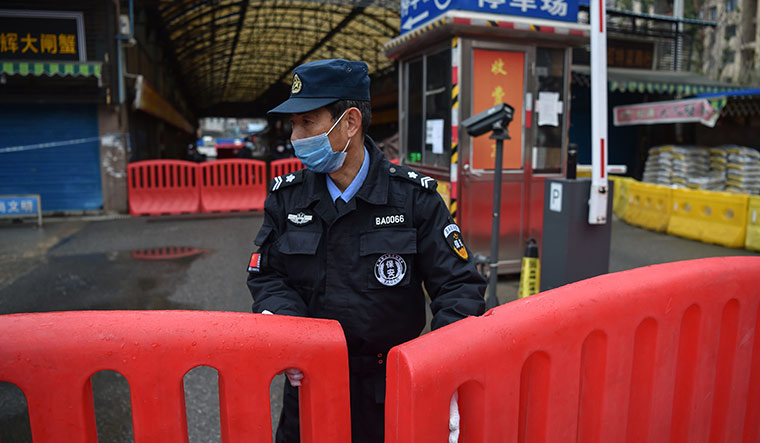 On the qui vive: A police officer stands guard outside the Huanan Seafood Market | AFP

Later that day, at the famous Wangfujing Street, we met an MBA graduate who said there was nothing to worry. “People are just being careful, because the Chinese New Year is coming and they do not want to fall ill…. We have managed even bigger problems,” he said.

January 23. Relief as we touchdown in Kochi. The Cochin International Airport already had a desk manned by the ministry of health. They checked our temperatures on arrival and asked us to report to the district medical officer in case we fell sick. For now, all seems well. My family and some colleagues keep track of me. Every morning I am given a reassurance that I am fighting fit. Of course, some keep a safe distance, especially when I cough, sneeze or wheeze.

January 27. I reached out to Leon Feng in Melbourne. When I met him in China, the 17-year-old was attending a short course in advanced kung fu. “I was told that thousands have died because of the coronavirus,” he said, “So, my parents urged me to return to Melbourne. They were worried that if the situation worsens, an overseas travel ban would be enforced and I would be unable to exit China. So I returned. I have a Chinese background and I am deeply attached to China and my family there. I hope the situation improves very soon.” 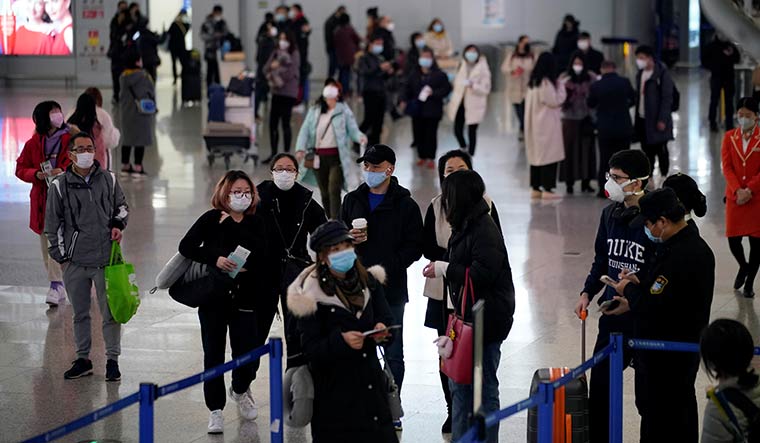 On tenterhooks: Passengers at the Pudong International Airport in Shanghai | reuters

The Chinese are known to handle crises well, and are more aware of the perils of an outbreak like this. Some of them, though, now criticise the government for keeping the masses out of the loop when it comes to critical decisions. An Indian woman we met in Beijing told us that the Chinese are used to wearing masks. “That is so much part of their daily lives. Beijing has dangerously high pollution levels during summers, and everyone wears masks then,” said Seeba Saji, a teacher in Beijing.

Shabil Nazir, an intern at the China Medical University in Shenyang city in the Liaoning province, who is now back in India, told me that the Chinese are very particular about celebrating the New Year, also known as Spring Festival or Lunar New Year. “We are usually in awe of how the Chinese celebrate and travel in style during this time. It was sad to see empty roads and shops at most places in the country,” he said.

A well-placed source in Beijing told us that the Chinese authorities always report lesser number of fatalities during an outbreak. “It was on January 21 that [President] Xi Jinping said at a public meeting that it was crucial to take every possible measure to combat the coronavirus,” he said, “At that time, the number of deaths was three. Suddenly, after this statement, the number of affected people swelled from 100 to 300 and the number of deaths rose from three to nine. So every government agency waits for a nod from the top before making an announcement. That’s how it works in China. And people are used to it.” China, this time, has been more open about the crisis than when it handled the Severe Acute Respiratory Syndrome epidemic in late 2002. 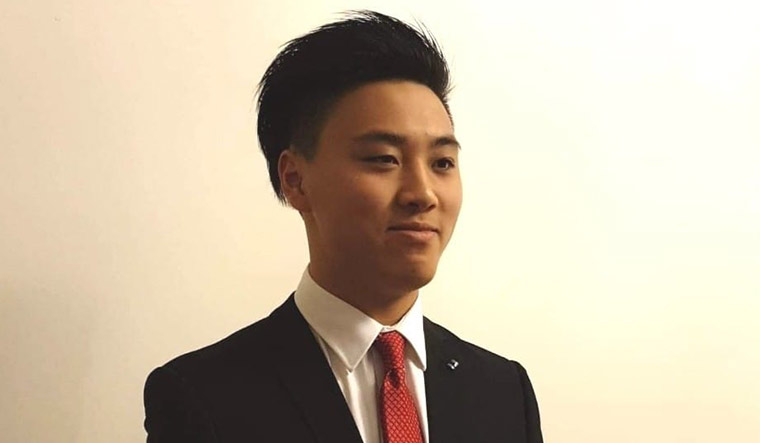 The 2019-nCoV has spread to other countries, too; more than 80 cases (as on January 29) have been reported outside mainland China. The maximum cases outside China are in Thailand (14), followed by Taiwan (8), Malaysia (7) and Japan (6). Germany, the US, South Korea, Nepal, Canada and Sri Lanka have also reported cases. India, it is said, is among the top 30 countries at high risk for the spread of the virus, with close to 1,000 people under observation in different parts of the country.

On January 28, Xi met Tedros Adhanom, director general of the World Health Organization. Xi told Adhanom that his country is fighting a “demon virus” which has killed 132 and infected 6,000 more. “The epidemic is a demon, and we cannot let this demon hide,” said Xi, while pledging that his government would be transparent and release information in a timely manner. Xi’s remarks came at a time when countries like France, the US, Japan and India are sending aircraft to Wuhan to evacuate their citizens.

Said the press counsellor of the Chinese embassy in New Delhi, Ji Rong, to THE WEEK, “The Chinese government is taking all the measures it can [to prevent the spread of the coronavirus]. Please follow the tweets of the [Chinese] ambassador.” The Chinese Ambassador to India Sun Weidong, who is an expert in South Asian affairs, cited the WHO advisory against evacuation. “WHO does not recommend evacuation of nationals, and called on the international community to remain calm and not overreact. WHO is confident in China’s epidemic prevention and control ability” he tweeted. 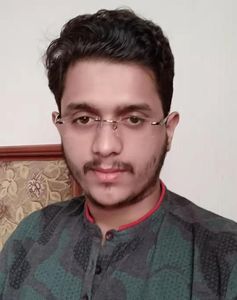 Sun’s tweet came soon after MEA spokesperson Raveesh Kumar tweeted that India is getting ready to evacuate its citizens affected by the situation. Meanwhile, External Affairs Minister S. Jaishankar urged people who are affected to trust the government. He said, “The Indian embassy is in constant touch with the Chinese government. To evacuate students and other Indians from Wuhan, we are planning to send a plane there. Our efforts are on to bring them back. It will take some days. I urge the people to trust the government on this. No Indian student has been found affected by this virus. Parents need not worry about their children.”

The Indian embassy in Beijing has opened three hotlines to support the affected. An IFS officer posted at the embassy said to THE WEEK, “We are in continuous touch with Indian citizens in Wuhan and are extending all possible support. We are also in regular touch with both foreign ministries [China and India] and provincial officials [from Hubei] in this regard. We are fully committed to safeguarding legitimate interests of Indians in China.”

MEA sources confirmed that China will allow the airlift of Indian citizens from Wuhan. “We have begun the process to evacuate nationals. We will seek help from the Chinese. Things are going in the right direction. Let us be patient,” said a source. An Air India aircraft with 423 seats is on standby in Mumbai, complete with 12 crew members and a team of doctors.

Wuhan, the capital city of the landlocked Hubei province in central China, is also called the land of fish and rice. It lies 1,152km south of Beijing. According to UNESCO, around half the world’s long-span bridges, and the majority of China’s high-speed railways, were designed by people from Wuhan. This is also where the first armed rebellion against the Qing dynasty, the last imperial dynasty of China, began in 1911, which led to the formation of the Republic of China. The Huanan Seafood Market, the epicentre of the coronavirus, is located in Jianghan district of Wuhan, and is a narrow complex of 1,000 stalls that supply seafood to Wuhan’s 11 million residents. According to some reports, meat of wild animals such as deer, fox and crocodiles are also sold in the market due to the high local demand.

Aswanth Krishnan, a fifth-year MBBS student in Wuhan University School of Medicine, has never been to this market. “I had not heard about it till this incident happened. It is far away from my university,” said Aswanth. He was one of those who left Wuhan just before the clampdown. “My friend and I took a train from Wuhan to Changshu. After a day’s stay, we flew to Kunming, and then to Kolkata.” Aswanth said he did not even have the time to take his clothes and essentials. “The moment we heard about the likelihood of the city being shut down we checked on the Wuhan municipal website, confirmed the news and left. Our university is closed till further notification.” Aswanth said the university is giving all help needed to his friends still in Wuhan. “The authorities called me and asked for my permission to open my room, as they wanted to utilise leftover supplies,” he said, “The college is providing everyone with free vegetables and chicken after thorough checking, so that students can prepare food in their rooms.”

Aswanth thinks some Indians got stranded in Wuhan, possibly because they were late to react. “Or it could have been because their passports were not with them. Some Indian students had given their passports for renewal of visas at the Wuhan Citizen’s Home. It feels good to know that all my friends are safe, and are returning to India soon,” said a relieved Aswanth. 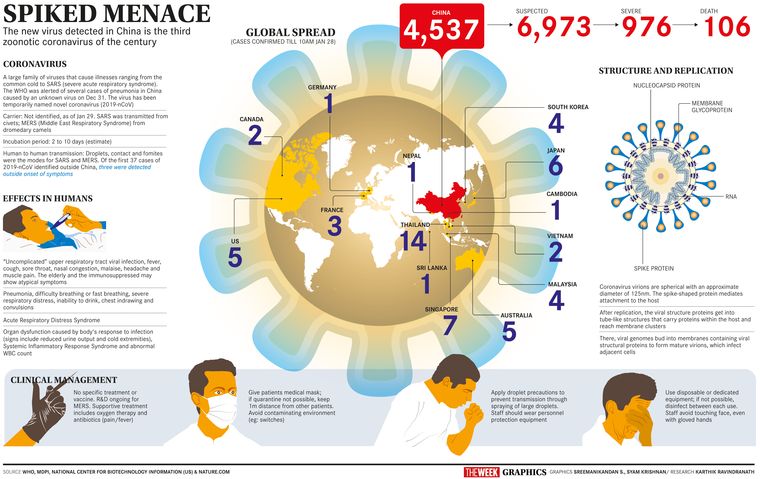