To hell and back 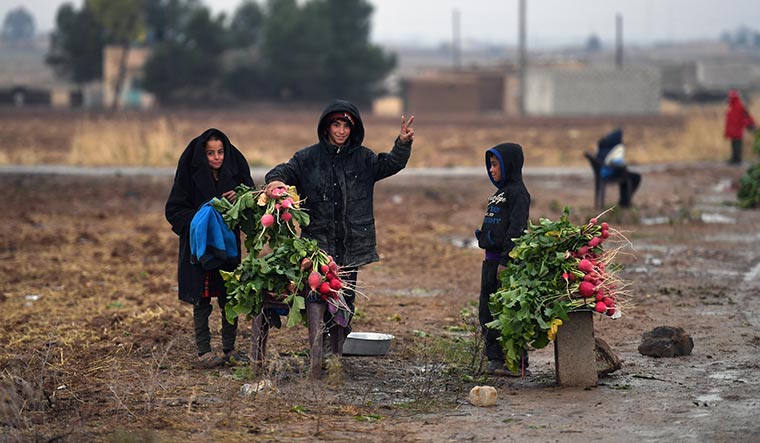 Hope floats: Children of peasants sell radish outside their farm located on the road from Al-Hasakah to Al-Hol.

Dark clouds had obscured Erbil, the capital city of Iraqi Kurdistan, when our aircraft started its descent. By the time we touched down, it was raining heavily. As we walked towards passport control, my colleague Lakshmi Subramanian and I were anxious, although we had been preparing for this assignment for nearly six months. We were on our way to the upper Mesopotamian region called the Autonomous Administration of North and East Syria, known popularly as Rojava. A de facto self-governed state which lies between the Euphrates and the Tigris in northeastern Syria, Rojava is controlled by the Syrian Democratic Forces (SDF), an alliance of Kurdish and Arab militias fighting the Syrian civil war. The SDF, led primarily by the powerful Kurdish People’s Protection Group (YPG), has been at the forefront of the fierce battle against Islamic State. It is also involved in an existential fight against Turkey and the Bashar al-Assad regime in Syria.

We had crossed our first obstacle—clearing immigration in India—rather smoothly. When the immigration officer asked us about our destination, we did not mention Iraq or Syria as we did not want to cause an alarm. Instead, we told him that we were going to Kurdistan. After scrutinising our e-visas, he allowed us to proceed, but only after pointing out in an educative tone that Kurdistan was an autonomous region in Iraq.

We had no such luck in Erbil, as Indians need a sponsor to be allowed entry into Kurdistan. As we had been in a hurry to get our visas, we had forgotten to gather more information about our sponsor before we had started our journey. We sat for a while with other Indians, hoping that our sponsor would arrive soon. A few hours later, we were the only ones left in the airport, which, by then, was largely empty. The immigration officer, who could sense our anguish, signalled that he was helpless. Lakshmi asked him whether we could use his phone to contact our sponsor. He took the number and dialled it. Soon, we could hear him yelling in Kurdish. After slamming the phone down, he told us in his broken English that the guy who had arranged our e-visa was a taxi driver named Salman. He had paid a “sponsor’ to sign for our visas. Salman was waiting for us outside, but he did not know that the sponsor had to be present to sign us in. It was a Friday, and the sponsor had gone to his village with his family to enjoy the holiday. The immigration officer said it would take him at least two hours to come to the airport.

Finally, five hours after we landed, our sponsor made it to the airport and completed our entry process. Outside, we met Salman, who had brought with him his “English-speaking” daughter to make communication easier. All she knew was to say “hello” and “welcome”.

When Salman came to our hotel the next morning to take us to the Faysh Khabur border, it was still raining. As we were about to board the taxi, we were shocked to see that it was already full. But we had no option but to squeeze in because we had to reach the border before it closed at 2pm. Seeing our unhappy faces, Salman poured us two glasses of dark and thick kahwa from his flask. The journey was quiet, with our fellow passengers curling up to ward off the cold and unwelcome conversations. 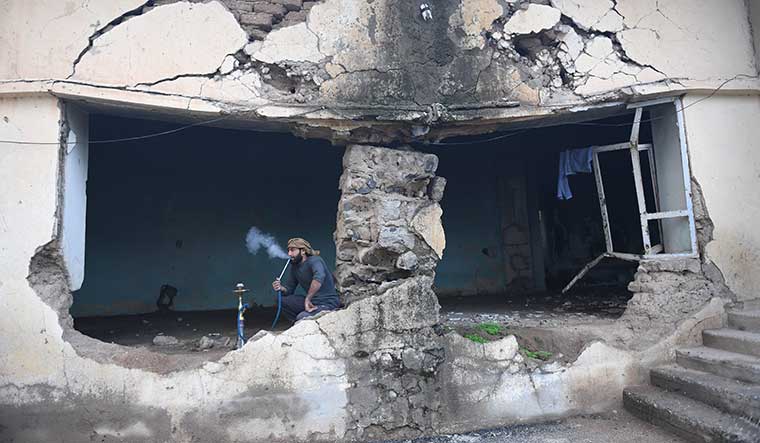 The arid landscape, soaked in pouring rain, made us feel that we were on a different planet. The Arabian music playing in the background, however, reminded us that we were still on earth, and in the Middle East. Reflecting on the troubles we had endured so far and on the challenges that lay ahead, I felt despondent. I took a sip of the kahwa, hoping to cheer myself up, but it tasted no better than the bitter situation that we were in.

The border post at Faysh Khabur is controlled by the Kurdistan regional government. Here, the Tigris acts as natural border between Syria and Iraq. On the Syrian side, the border post is called the Semalka crossing. As we entered the registration centre for foreigners, a young lady welcomed us warmly, telling us that we were the first Indian journalists to visit Rojava. The pleasant welcome was in complete contrast to all the miserable encounters we had experienced in our journey till then.

As we waited for the paperwork to be over, we saw many westerners—mostly journalists, security contractors and aid workers—returning from Syria. They reassured us that it was safe on the other side of the border. After finishing the formalities and clearing security check, we boarded a bus to cross the border, along with several refugees who were on their way back.

We crossed a pontoon bridge on the Tigris and we both felt so excited to be the first Indian journalists to set foot in war-ravaged Rojava. It took us another hour to complete the paperwork on the Syrian side. Ferhan, our fixer (guide) in Rojava, took charge from there. He tucked our work permits safely inside his jacket. He was also carrying a pistol inside the jacket. “Your safety is my responsibility,” said Ferhan, in good English. He took us in a car along a dirt-filled track across a seemingly endless desert close to the Turkish border. Ferhan told us stories of visiting journalists and about the situation in Rojava and other parts of Syria. As we drove on, we saw the horse head of an oil pumpjack moving up and down slowly, lifting crude oil from the ground. My head was nodding similarly, listening to Ferhan’s narration.

It was 3:30 in the afternoon when we reached Rojava’s capital Qamishli. We were told that Qamishli was relatively safe, but in this part of the world, danger always lurks in the shadows. A car bomb had gone off weeks ago next to our hotel. Many lives were lost in the Turkish shelling last year.

The early winter sunset and the rain clouds had spoiled my mood by creating the worst possible light setting for a photographer. The next three days were a nightmare as the temperature dropped further. We were feeling tired as we missed our regular food. I was eating bread and meat, which tasted bland. Lakshmi, a vegetarian, survived mostly on a sweet dish called mamouniya, a semolina pudding.

Our persistence paid off as we got a rare chance to visit Al-Hasakah prison, which houses male IS detainees from Iraq, Syria and many other countries. The place looked like hell on earth, with around 7,000 prisoners locked up in small cells for months. With not enough toilets for so many people, the cells reeked of human excreta. I tried taking pictures of some of the prisoners by putting my camera inside the small window of a cell, but it suddenly turned pitch-dark. Some of the prisoners, who did not want to be photographed in such a pitiable state, had switched off the lights. Despite the fall of the caliphate, many of the prisoners still remained proud and defiant. They had no idea that their leader Abu Bakr al-Baghdadi was no more. Prison officers asked us not to share such details with them.

At Al-Hasakah, most of the buildings we saw were disfigured by shrapnel marks. Minarets of mosques and school walls bore ugliness left by explosions. Despite the losses, the SDF has managed to clear the area of Islamic State fighters. I could see the fighting spirit of the Kurds in their eyes. We saw young girls of the all-women YPJ (Women’s Protection Units)holding automatic machine guns instead of school books, keen to be a part of the Kurdish struggle for freedom.

Al-Hol camp, the tented city which houses almost 12,000 IS women and children, is guarded by the YPJ fighters. Continuous rain had turned the camp, built on an undulating strip of barren land, into a damp hell. The roads around the camp were so slushy that it was nearly impossible to walk.

The inmates of the camp looked like residents of a ghost town. They warned me against taking their pictures when I turned my camera towards them. A BBC video journalist had told me that his camera was snatched away by a few women when he tried to film them. As I was preparing to shoot, I was hit by a stone. I turned around and found a few children throwing stones at me. I was not sure whether they were angry or were trying to attract my attention.

The scene inside the camp was even more depressing than what we saw in the men’s prison. We saw children playing in the mud, and a few were crying because of the biting cold. Some women were trying to fix the tents damaged in the rain. Everything, however, was not as plain as it seemed. With their faces hidden by veils, it was hard to imagine what was going through their minds. Perhaps, a plan to avenge the defeat of Islamic State. The visit to Al-Hasakah and Al-Hol was one of the most harrowing experiences in my life. It took a heavy toll on both of us, mentally and physically. Upon our return to India, we were down with fever for more than two weeks.

The sun was shining brightly the day we said goodbye to Syria. But it did not brighten our sombre moods. As we crossed the Tigris back into Iraqi Kurdistan, we could think of nothing except how differences in the name of religion have turned the cradle of civilisations into hell on earth.