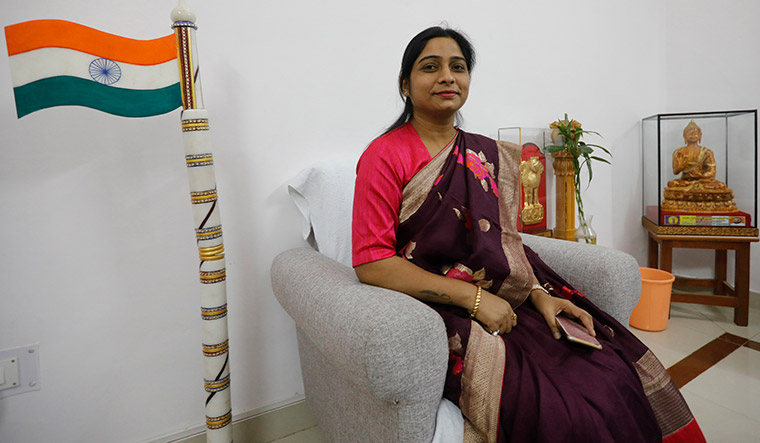 The seed of contesting in the Lok Sabha election was planted in Sanghmitra Maurya’s mind in 2010, when she was fighting the zila panchayat elections from Etah in Uttar Pradesh. Everywhere she went, women told her, “Lalli (daughter in the local dialect), this is a small election. You must become our MP.”

However, for Sanghmitra, who had just completed her medical education, that path was not very clear. She was content doing social work, which included propagating the Buddhist faith. As a medical officer at the district hospital in Pratapgarh, she had accepted a token salary of 0100 and donated the rest to the hospital’s fund for poor patients.

In 2017, within a year of joining the BJP, she was once again asked about contesting the elections. She refused, but enthusiastically managed the party’s Parivartan Yatra in five districts and played a role in the party’s women cell. But in 2019, there was no asking. “My father told me that my name had been announced in the first list of candidates,” she said.

Sanghmitra’s father, Swami Prasad Maurya, has been a legislator since 1996. Once a trusted lieutenant of BSP chief Mayawati, Maurya switched to the BJP in 2016 and is currently a minister in the Adityanath government. His departure from the BSP was speculated to have been over his demand and the party’s refusal to give tickets to his son and daughter. Her candidature was seen as a test for her father, who was in charge of the Badaun constituency. “Never once did I think that the challenge was too big for me,” she said.

Her opponent was Mulayam Singh Yadav’s nephew Dharmendra Yadav, a two-time MP who was known as ‘mini CM’ for his influence. “For a man with so much power, all he gave his constituency was an ill-equipped medical college,” she said. Though she had sensed the electorate’s disenchantment with the sitting MP, she braced herself for a tough election. On counting day, she held on to a slender lead, and won by 18,384 votes.

During the campaign, Sanghmitra’s opponents raked up the troubles in her marital life. “These are questions you ask only a female politician, never a male,” she said. “Not just in politics, in every field, women are subjected to pervasive, intrusive scrutiny.”

She was born 14 years after her parents got married. She decided to study medicine after overhearing her father saying that he wanted her to become a doctor. She sports a tattoo on her right forearm, which is dedicated to the most important people in her life—her parents and her seven-year-old son Samrajya.

Sanghmitra’s political philosophy is to give voice to the poorest, the most marginalised and the most backward. “Till you do not prepare such people to stand shoulder to shoulder with you, your work is not done,” she said. Her political influences include Kanshi Ram and Sushma Swaraj. She also admits to have liked Mayawati earlier. “In her first term she was so strict,” she said. “But then something happened to her.”

A better medical college, improved rail and road connectivity and avenues for girls’ education are Sanghmitra’s priorities for her constituency. She said she was in politics for the long run. “This election, I was known as someone’s daughter. I had Modiji’s work to fall back on,” she said. “But next time, it will be my name and my work.”