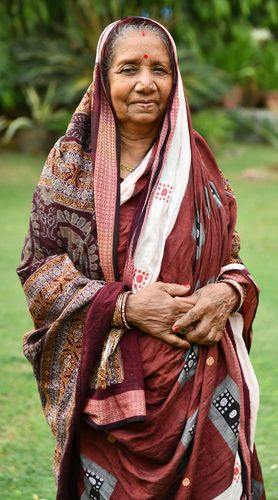 There is bright red alta (dye) on her feet. Her wrists jangle with glass bangles. Two nose pins dot the tip of her nostrils. Diminutive but upright, Pramila Bisoyi, 70, looks at ease in New Delhi, getting her identity card issued, submitting her bank details and figuring out the process for getting the MP’s accommodation. Nothing about her belies the fact that this is the first time she has travelled out of Odisha; she is accompanied by her son Dilip, grandson Gobind and a village party worker. “It is a beautiful place. I am impressed with Dilli Durbar [Parliament House],”
she says.

Pramila is the poster girl of Biju Janata Dal leader Naveen Patnaik’s women empowerment initiative, Mission Shakti. He reserved 33 per cent of the parliamentary seats for women, and entrusted Aska, a constituency earlier represented by his father and from where Patnaik started his political career, to Pramila. Her nomination was a shocker for many. A class three dropout and wife of a subsistence farmer had been preferred to educated candidates, some even from erstwhile royalty. If the nomination made people sneer, the result hit many in the solar plexus—Pramila won with a margin of more than two lakh votes, among the highest victory margins in the state.

Interacting with this mother of two sons and two daughters, one soon understands why she was the chosen one. There is steel in her resolve, confidence in her approach and calmness even in an alien environment. Pramila holds her own, as she has for years. She was in her 40s when she mobilised women to demand water security and toilets. That was her first interaction with the Gram Vikas Yojana. When she learnt that greening the landscape would help in better water management, she mobilised women of her maternal and marital villages for tree plantation. Soon, she was general secretary of all self help groups (SHG) in her block. Each block has around 25 panchayats; there are 30 SHGs in every panchayat. She was involved in projects that encompassed a range of rural issues—sanitation, nutrition, environment and even peacock protection.

When she got a call from Patnaik’s office to meet him in Bhubaneswar, she thought it was for yet another award (she was awarded by the chief minister seven years ago and the governor 15 years ago). “Instead, they thrust the ticket into my hands,” she recalls. Pramila did not know then what being a saansad entailed, but she knew that “Naveen Babu” was entrusting her with something important. That was enough for her. She is his soldier. She nimbly hopped onto the helicopter with him during the campaign, the pallu of her traditional cotton sari firmly on her head. She fondly remembers his concern, as he asked whether she was feeling dizzy. “But, I was fine, enjoying the ride,” she says. She flew to Delhi after winning—her first flight. Indeed, Pari Ma (fairy godmother), as she is known locally for her help with maternal health, had finally found her wings.

Neither flying high has made her dizzy nor has the landing of this plum position. The trappings of the office do not mean much to Pramila. The workplace might be air-conditioned, but it is as immaterial as the tin-roofed house she lives in. “My advice to everyone is to do their work, not wait expectantly for the fruit. When you plant a tree, it could takes years to fruit. It might not even happen in your lifetime. Focus on your work, therefore,” she says.

Pramila knows that she will be rubbing shoulders with parliamentarians who will rattle off in English and Hindi. “I speak Odiya, they will translate what I say, even as I get a translated version of what they say,” she says. The Lok Sabha is just the beginning of her work as Naveen Babu’s appointee. “I will sit with other party members to decide what stand we take on an issue. And, I will always remain the representative of the 70 lakh women of Odisha who are in SHGs,” she says, as she signs an autograph for a young woman at Odisha Niwas—another first.