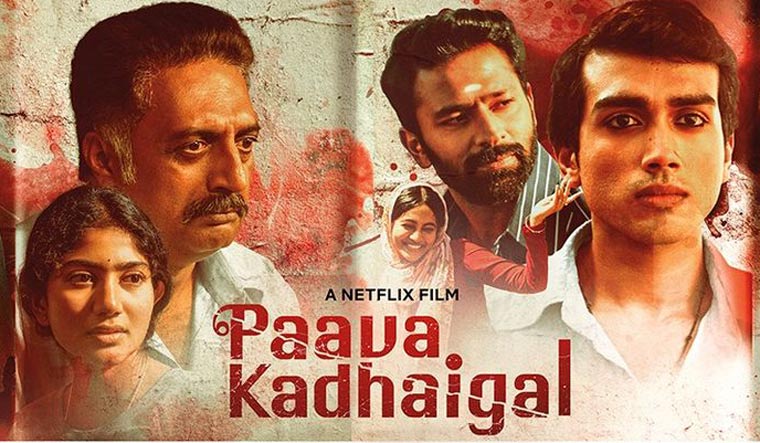 The anthology of four films, directed by Sudha Kongara, Vignesh Shivan, Gautham Vasudev Menon and Vetrimaaran definitely does justice to the long wait for it. The four different stories that unfold in

separate premises bead through a common thread of the theme—honour, or rather its monstrous form that permeates the society.

Thangam, the first short by Sudha Kongara is set is a village where Sathar (Kalidas Jayaram), a transsexual, struggles to get a foothold to establish himself as part of the society.

Sathar is perpetually dogged by identity as well as existential crisis in his rustic hamlet where social norms matter more than living standards. Thangam, a young man who is the son of a ration shop

owner in the village, is Sathar's heartthrob for whom he is planning to to undergo a sex-changing surgery in Mumbai.

He harbours a bit of human values and finds a good friend in Sathar, though his love interest is different. The clash of differences in class and community flares up, and how honour burns into ashes the existence of someone who does not belong to any class or identity is the rest of the story. This is an immaculate performance by Kalidas, who might preserve the character close to his heart for the rest of his life

However, Shantanu Bhagyaraj who donned the role of Thangam, could have scaled the intense moments a bit higher to reach the peak of the emotional intensity that the tale conjured up.

When Adhilakshmi reveals to her father the man she has chosen for her life, conquering her fear, her father agrees to their relationship. She conveys her new-found joy to her sister and friend Penelope and invites them home, given the changed attitude of her father.

Performances by Anjali as Adhilakshmi and Jyothilakshmi, Padam Kumar as Veerasimman and Kalki Koechlin as Penelope are outstanding. However, the writing slips at times and falls to triviality.

Vanmagal pitches on a common middle-class household that begins with the same old story of a happy family with father, mother, two teenage daughters and son who bond well. But the narrative has something else to unveil as the journey progresses. It dwells on the theme what body means to a girl once she reaches gestational age.

The story revisits the same age-old subject of the menacing social insecurity of the fairer sex, but the narrative whizzes way forward and puts across some questions on right to life versus honour in an

Gautam Menon as Satya, Simran as Mathi have superbly handled the characters. Adithya Bhaskar, of 96 fame, as Bharat is a class apart.

The saga of honour versus right to life culminates in the final segment, Oru Iravu directed by Vetrimaaran.

Sumathi, played by Sai Pallavi, is on her own living with the man of her choice in a world she has diligently created after deserting her kin.

When her father Janaki Raman, played by Prakash Raj, comes to know that his daughter is pregnant she finds her address and drops in. Sumathi's filial love allows her to let go of all her past skirmishes with the family.

Whether the sense of honour and pride numb his senses or his sensitivity gets the better of him is unravelled at the end of the story.

Oru Iravi is the most absorbing story in the compilation. Sai Pallavi, through a stellar show, takes away a great chunk of the 'honour' of the drama.

As the credits roll up, what might haunt for some more time would be the relentless hoots of the terms, pride, honour, social norms and so on embedded in the culture of Indian society that, ironically, prides itself for familial bonding.

(This review was first published in onmanorama)