Batla House review: It's John Abraham all the way

Batla House, unlike its hero/anti-hero ACP Sanjay Kumar, is scared of taking a stand 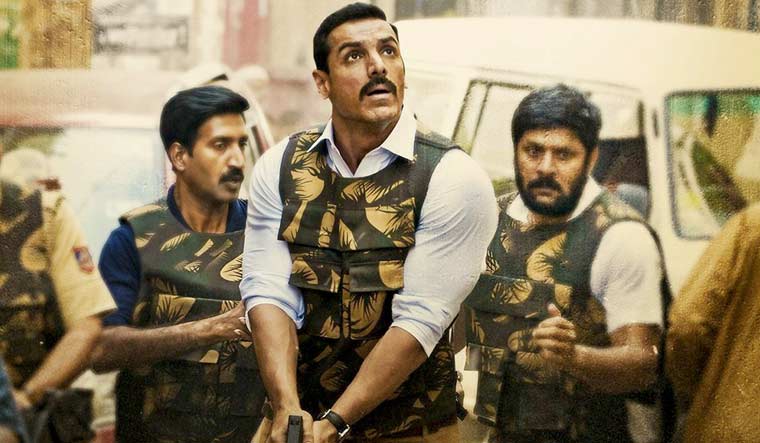 It was on September 19, 2008, that a team from Delhi Police's Special Cell acted on a tip-off to investigate the presence of terrorists—allegedly involved in the September 13, 2008, Delhi serial blasts—at L18, the Batla House flat in south Delhi's Jamia Nagar. What followed was a highly controversial encounter which led to the killing of a much-decorated city inspector M.C. Sharma along with two suspected operatives of Indian Mujahideen. The trial court is yet to deliver its verdict in the blasts and the encounter cases. Yet, here we are, eleven years later, with a fictionalised account of the infamous Batla House encounter, "inspired by true events".

With a conflicted John Abraham leading the wobbly operation as Sanjay Kumar, Assistant Commissioner of Police, Batla House is an engaging watch. But only if you keep your attention trained on John Abraham. He is the lynchpin who has everyone in thrall, including his TV journalist wife who addresses him as "Sanjayji" unironically and unconvincingly. Ravi Kishan, as the hefty, no-nonsense cop mirroring M.C. Sharma should have been offered more screen-time but he doesn't get to flex his muscles much. He is put in place to heighten the moral conundrum besieging the ACP in the wake of intense pressure to nab the culprits behind the serial blasts. And Abraham has admirably delivered as a cop who is unsure but upright, confused but in control, suffering with guilt and paranoia but ready to fight the demons within and without. One wishes his dialogues weren't so trite and dull to complement his turn as a fearful but emotional cop.

The courtroom scenes in the second half also cry out for more verbal sparring between defence and prosecution. The ACP urging his lawyer to not mix up the truth of a cop caught in the crossfire of bullets with that of a legal counsel offers a bit of sparkling debate but it hardly suffices. The court-iers (pun intended) soon given in to the charm and intensity of the ACP who has pointblank comebacks in the presence of a beaming wife and his cheer-leading cohort of junior officers. This star-driven film—where, in one instance, Abraham teaches the tenets of Islam in Arabic during interrogation and later in another gets the key suspect to weaken with his unrelenting, tearful speech against fundamentalism and indoctrination—could have adopted a less paternalistic tone.

The Delhi High Court, on August 12 this week, rejected the petition of blast accused Ariz Khan who did not want the film to be released lest it affected the trial. But the court allowed the film's release on Independence Day after getting the word "mujahid" muted and putting disclaimers. And the filmmakers put in the longest possible disclaimer at the start. Batla House, unlike its hero/anti-hero ACP, is scared of taking a stand.