'Super 30' review: Annoying film that does no justice to its characters 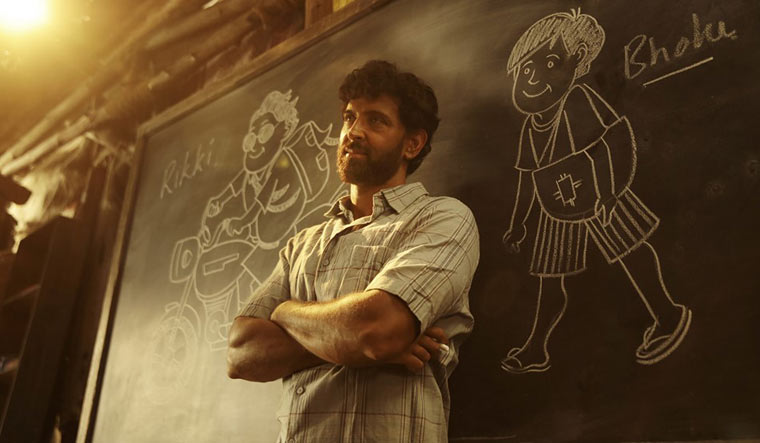 In a world of the impoverished and not-so-privileged, Bihar mathematics whiz Anand Kumar, son of a postmaster, created a whiff of optimism with Super 30. A batch of 30 students, unable to afford education in a cut-throat world, got support from Kumar to clear the joint entrance exam of the Indian Institute of Technology. The story, without a doubt, is inspirational and important, but it's treatment in the film isn’t so much. What should have stirred emotions is diluted with overbearing dramatisation and simplification of complex issues.

What’s welcoming about the film is that a big ‘superstar’ like Hrithik Roshan, mostly known for larger-than-life characters, is playing the oppressed without any inhibition. That is rare in Hindi mainstream cinema. But then, he has gone too far to give an authentic touch and has dabbed himself with tan, different shades in different parts of the movie. The approach may have come out of sincerity, but it, instead, is too distracting to give Super 30 a touch of finesse.

But bronzing the protagonist is not just meant to achieve a look that is closer to the real-life person he is portraying. It is to create a distinction between the classes, caste—not as much—as the film tries its best to avoid any direct mention of it. And that is where it falters the most. By avoiding talking about the caste, the film fails to emphasise the point that the real-life Kumar has made—that of breaking through the clutches of social demarcation and making a place on the back of talent.

Kumar’s story in the film begins in 2017 in an auditorium in London that is overflowing with global citizens. A Super 30 alumnus, Fugga Kumar (Vijay Varma), as he prospers in his career and is felicitated for his work, relives his past. His story of success coincides with that of Kumar. In 2002, he decided to leave a miserable life and his village in Bihar and ran to Patna to join Anand’s Super 30 classes that began in the same year. Fugga’s narration of the story, however, does not begin in 2002.

Fugga goes back to the 90s when Kumar rose as a math whiz during college. He goes back to the time when he romanced a girl from an upper class. And, to the time when Kumar secured a seat in the Cambridge University, but his plea for financial help is turned down by the same education minister, Shree Ram Singh (Pankaj Tripathi) who had earlier, at a college award function, promised him help. He loses his father, is stuck in a financial mess and resorts to selling pappad on the streets to keep life going. He is pulled out of the financial mess by an IAS-officer-turned-teacher, Lallan Singh (Aditya Shrivastav), with an offer to teach math in his institute. Things look better. Kumar is flourishing and pays little attention to how the institute where he is employed is running an education racket. Until one night, under the influence of alcohol, his conscience shakes him. And, he decides to start Super 30.

While you as an audience wonder about how is Fugga aware of everything in such detail, he goes on to paint a picture of Kumar that is sympathetic and full of struggles. His story is heroic, but the narration, not as much.

Somewhere in between Super 30, everything starts falling apart. Some overlooked details glare in your face, other effects used to give dramatic undertones to the story are played up so much that even the suspension of disbelief starts giving up. For instance, Anand, during the pappad-selling phase, gives away his offer letter from Cambridge University to one of the customers. It burns to ashes in front of his eyes. A moment created for compassion. In reality, Anand Kumar has posted the picture of the offer letter on social media to create a buzz about the film.

The reality, however, is murkier. Questions have been raised about the success of the Super 30 model—about its fund-raising method, about the students and the classes. The film, in which Kumar has been closely involved, could have answered a lot of those questions. But it does not. Is Kumar teaching all the three subjects—maths, physics and chemistry—to his Super 30 batches? In reality, no. But in the film, yes.

In fact, in the film, he has been so good at imparting the knowledge of all three subjects that his young students turn into superheroes during a testing situation. They invent weapons to fight goons who are approaching the hospital where a wounded Kumar is being treated. But this over-the-top sequence in the film is also the only time when a direct jibe is made on the class-structure. A hospital peon, in his earnestness to help Kumar, reproaches an unhelpful doctor as “donation walla”, a dig at the management quota students. Other than this, the mention of class and caste is limited to narrating Eklavya’s story from Mahabharata and repeating the line “raja ka beta raja” many times over.

If Sanjeev Dutta’s script lacks a punch and coherence, Vikas Bahl’s direction is uneven and patchy. Add to that some really loud background music, and the result is an annoying film that is not able to do justice to its characters, even if there are some good actors. Nor is it able to elevate the experience that a subject like this should have.