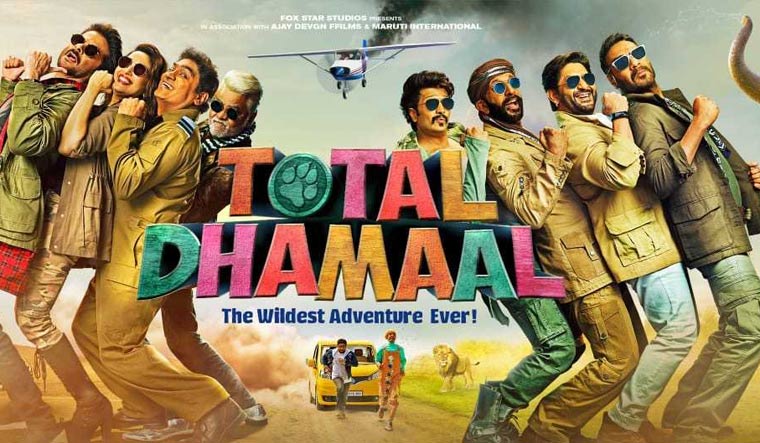 After a rather well-made first film (Dhamaal), and a disappointing sequel (Double Dhamaal), Indra Kumar now gives us Total Dhamaal.

Those who have followed the premises the franchise so far will be familiar with the storyline of this one as well—a dying man blurts out the existence of a treasure worth crores of rupees in his many last breaths, kicking the bucket conveniently before the location is revealed. All hell breaks loose when a motley gang of misfits use this information to hunt the treasure down through their misadventures, picking up a moral lesson or two along the way.

The ensemble cast consists Ajay Devgn as Guddu, Riteish Deshmukh as Deshbandhu—a recently unemployed firefighter, and Anil Kapoor and Madhuri Dixit as a squabbling Gujarati couple on the brink of separation. Arshad Warsi and Javed Jaffrey reprise their roles as Adi and Manav, the dysfunctional brothers. Boman Irani plays a corrupt police commissioner, while Sanjay Dutt (who could not make a comeback for obvious reasons) and Aashish Chaudhary make nostalgic cameo appearances in archived footage.

Kapoor and Madhuri do their best with the material they received, playing off each other with an ease that only comes with years of working together. Most of the supporting cast register average, if not mediocre performances, with Riteish Deshmukh throwing in a ‘bey’ every three seconds to assure the audience of his Bhojpuri pedigree, Ajay Devgn exploiting his slo-mo walk to the fullest, and Johnny Lever making a cameo as a helicopter pilot cum auto driver. Warsi and Jaffrey elicit a few laughs using the last few drops of humour left in their characters from the previous movies, although one wonders if they have it in them to take Adi and Manav through another one of these movies (already reported to be in the works, titled ‘Full on Dhamaal’). Esha Gupta appears towards the end of the movie to look pretty and add a belated romance angle, as does Mahesh Manjrekar as Chinappa Swamy—every Tamilian stereotype rolled into one. Oh, and a delightful but underused Jackie Shroff adds to the list of cameos as the creepily sentient Chindi GPS.

There are rare beauties in the cinematography by Keiko Nakahra, but for the most part, it is a (VFX) jungle out there. This is seen especially in the scenes set at the zoo, where CGI animals teach our heroes lessons in kindness, familial love, and…Gujarati pride? Gee, one wonders who would be happy about that.

Maybe, if they rebrand this as the Bollywood version of the Disaster Movie, the critics would appreciate the sheer number of predictable jokes and comic clichés that populate the film. Sadly, Total Dhamaal takes them very seriously. Our gang of characters (assumedly emulating their childhood animal heroes Thomas and Jeremiah) breeze through impromptu skydiving, cars bursting into flames, helicopter crashes, and plunging waterfalls with nary a scratch and an immortal tenacity that would make Chuck Norris beg for mercy. Indeed, the only visible drop of blood seen is when a vulture pecks Javed Jaffrey, who is lost in the desert wearing brown Minions overalls and a yellow beret.

Now, that is not a sentence one ever expects to read.

There were, however, consistent laughs among the audience at the innumerable puns and slapstick gags on screen. Maybe, the audience of today just need a mindlessly funny movie in any shape or form? And to be fair, the series was never advertised as pushing any sort of agenda than clean, slapstick, in-your-face-humour. And in that, it has moderately, somewhat made a faint impression. So there.