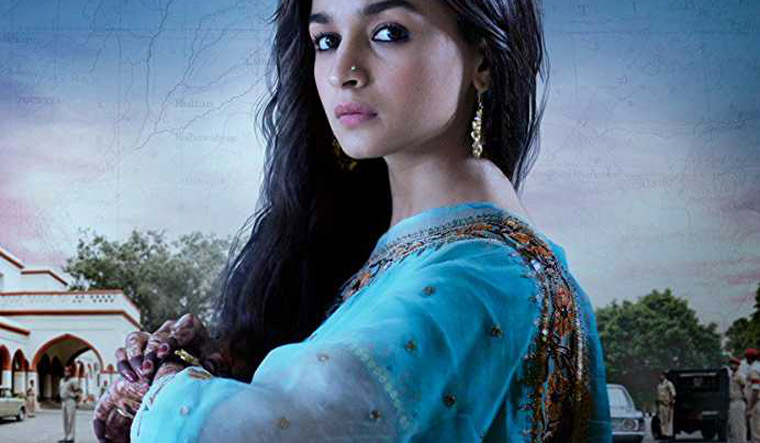 All concerns that may have led to Raazi—a film based around the India-Pakistan war of 1971—not getting a release in Pakistan probably because they expected a portrayal of hatred, can be abolished completely. Yes, it is a sensitive subject and treads a thin line. However, a tale that could have easily ended up as another jingoistic offering from Bollywood, has being dealt sensibly, thanks to the refined purview of director Meghna Gulzar. She looks at the story not just objectively, but balances it so well that you forget that in the current times there is so much tension brewing between the two countries.

Based on retired Navy officer Harinder Sikka’s 2008 book, Calling Sehmat, Raazi is the story of Sehmat Khan (Alia Bhatt) who gets married to Iqbal Syed (Vicky Kaushal)—the youngest son in a family of army officers in Pakistan. Originally from Kashmir, belonging to a family of Muslim-Sikh patronage and studying in Delhi University, she follows in her father’s (Rajit Kapur as Hidayat Khan) footsteps who works for the Intelligence Bureau.

Raazi is set in a time when it is no longer about the shadows of partition—people are not talking about their fathers and grandfathers having grown up in this or that side of the divided country. They, in fact, have their own deeply moving stories which follow them.

Sehmat’s father is a college friend of her father-in-law, Brigadier Syed (Shishir Sharma). Syed may be a staunch Pakistani army officer, protective about his country, but that doesn’t stop him from embracing his Indian daughter-in-law. In his trust, the audience can see the trust that still prevailed between the two countries—relations were being built, and efforts were on to keep the affection for each-other intact. Then there is the Syed family's household help Abdul (Arif Zakaria)—an Indian who has ended up in Pakistan after the partition. A range of emotions are covered through Abdul’s reactions to certain situations.

It is through the many people in the film, even in small roles, that Raazi explores how partition hadn’t really touched humanity adversely, at least during that period. This remains true even as the tensions between India and Pakistan are running high in the midst of the liberation war. For instance, in one scene, Iqbal tells his father that Sehmat’s actions are a result of her love for her country. That is what makes Raazi a tale of human emotions more than just an espionage drama, which also it convincingly becomes. Meghna Gulzar, like she did with her earlier film Talvar, leaves it entirely on the audience to interpret the story as they want. But even while doing that, she covers all grounds, leaving no room for ambiguities that is often the case with a spy film.

Alia Bhatt's acting prowess is on full display in Raazi—she portrays a dutiful daughter-in-law as convincingly as she essays an undercover agent.

The book Calling Sehmat is based on the true life story of a woman who married a Pakistani army officer to spy for her country. If reports are to be believed, the real Sehmat Khan passed away recently. We can safely say that Alia Bhatt’s performance is as close to real as it can get—right from her being trained to be a spy to her really executing it, barring a few occasions when her dialect seems out of the place. And so is the the understated performance of Vicky Kaushal. Also, Jaideep Ahlawat as Khalid Mir, Sehmat’s trainer, shines in Raazi with a fine performance that requires him to have restrained emotions on his face.

The songs, lyrics of which are penned by the legendary Gulzar, have a patriotic fervour, especially Ae Watan. Like the film itself, the songs, too, never force you to take side of either of the countries. Rather, what it does is move you deeply to introspect a bit about the situation, which has turned uglier since the period during which the film is set. Ae Watan will move you even after leaving the theatre, not as a patriotic song just for India but a love song that would suit well for any country.

It is too aspirational to expect people to be as objective as we saw in the film—not judgemental but practical. But there is no harm in at least hoping it becomes a reality.