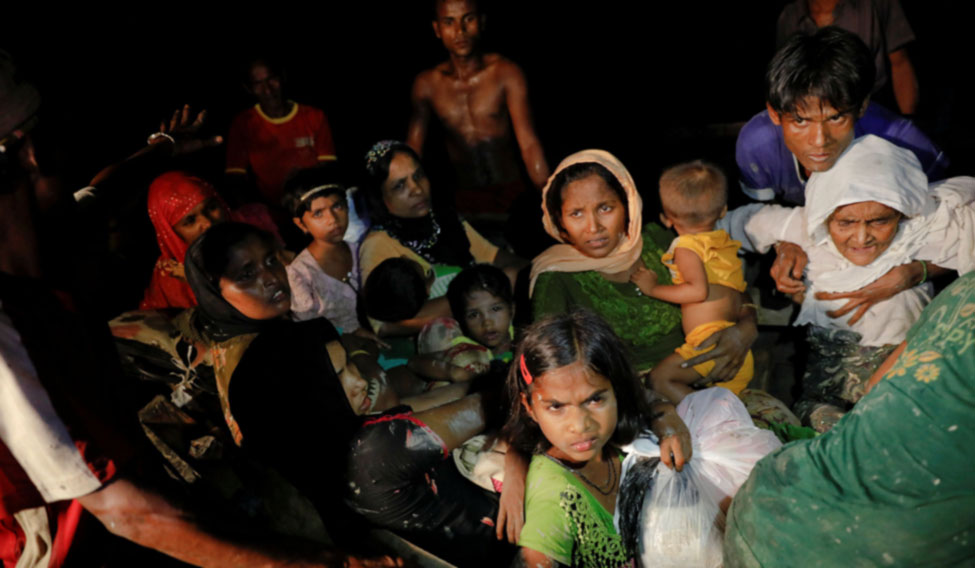 The media has "exaggerated" the number of Rohingya refugees fleeing an army crackdown, Myanmar's commander-in-chief said today, in a brash rebuttal of accusations of ethnic cleansing by his forces.

Some 520,000 Rohingya have fled Myanmar's western Rakhine state since August 25, when the military launched a sweeping campaign against militants from the Muslim minority.

The crackdown has been so intense that the UN yesterday accused Myanmar of trying to purge its entire Rohingya population.

A new UN report released yesterday described the army-led crackdown as "well-organised, coordinated and systematic, with the intent of not only driving the population out of Myanmar but preventing them from returning to their homes".

Half of Myanmar's Rohingya have bolted over the last seven weeks, fleeing incinerated villages to join what has become the world's largest refugee camp in neighbouring Bangladesh.

Thousands more are still trying to escape, massing on beaches and hoping to cross the Naf River before their food runs out.

But in a Facebook post on his official page on Thursday, army chief Min Aung Hlaing was unrepentant, describing the military response as proportionate and playing down the scale of the exodus.

It is an "exaggeration to say that the number of Bengalis fleeing to Bangladesh is very large," the post quoted him as saying, using a pejorative term for the Rohingya that classifies them as illegal immigrants.

Instead, he blamed "instigation and propaganda" by the media, who have become a punching bag for anger inside Myanmar, a Buddhist-majority country where there is little sympathy for the Rohingya.

The humanitarian needs of the refugees who have made it to Bangaldesh are immense with limited food, shelter and the threat a disease outbreak deepening by the day.

But Min Aung Hlaing, who rights groups say carries personal responsibility for the crisis, insisted the Rohingya are merely returning to their motherland.

"The native place of Bengalis is really Bengal," he said. "They might have fled to the other country with the same language, race and culture as theirs by assuming that they would be safer there."

He also reiterated the army's view on the contested history of the Rohingya, saying they were moved in from Bangladesh by British colonialists and have no legitimate claim to lineage on Myanmar soil.

While immigration increased under British rule, historians say Muslim communities were recorded living in the Rakhine region long before the colonial era.

His comments followed a meeting with US Ambassador Scot Marciel, who according to the post "expressed concern" over the half million refugees and offered to help aid efforts.

This week an AFP reporter on a rare government-steered trip to the conflict-hit Rakhine heard testimony from Rohingya villagers who are scared and fast running out of food.

They said ethnic Rakhine Buddhist villagers are trying to starve them out of their homes.

Authorities are providing supplies to the Rohingya left behind, Min Aung Hlaing, glibbly adding food is plentiful in Rakhine where "fish can easily be caught" in its waterways.

Your form could not be submitted.
This browser settings will not support to add bookmarks programmatically. Please press Ctrl+D or change settings to bookmark this page.
Topics : #Rohingya community