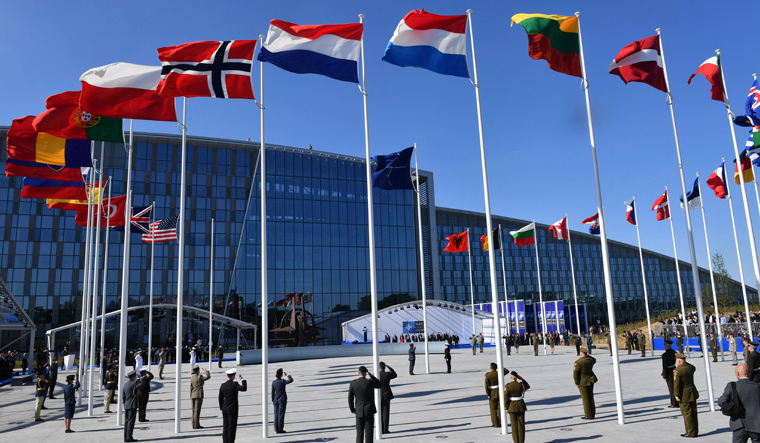 The US-led North Atlantic Treaty Organization (NATO) has chosen to take a conciliatory position by not taking a strong stand on the incident of a reportedly Russian-make missile landing in eastern Poland on Tuesday, indicating a marked ‘reluctance’ for a direct confrontation with the Russians.

The missile landed about 24 km away from the Polish-Ukraine border in a town called Przewodow on Tuesday and killed two Polish nationals.

Poland is a member of the 30-member NATO military alliance.

Under Clause 5 of the NATO Charter, the member countries “agree that an armed attack against one or more of them in Europe or North America shall be considered an attack against them all” which would necessitate collective action including “use of armed force”.

Under Clause 4, member states “consult together whenever, in the opinion of any of them, the territorial integrity, political independence or security” of a member is threatened.

Clause 4 allows preventive diplomacy to help avoid an escalation that may lead to military conflict. It does not mandate member states to carry out follow-up action.

The onus is upon the aggrieved country—Poland in this case—to call for a meeting citing the clause.

On Wednesday, an emergency meeting was held in Bali that was attended by G7 leaders—from the US, UK, Germany, France, Canada, Italy, and Japan—and leaders of Spain, the Netherlands and the EU—all of whom were in Indonesia attending the G20 Summit.

US and Polish Reaction

What is interesting is the initial reaction of both President Joe Biden and Polish President Andrzej Duda.

On the other hand, Duda was quoted by agencies as saying that the incident was probably “a one-off” incident and there was no clear evidence as to who fired it.

It was the Polish foreign ministry which first said that the missile was of Russian make.

While Russia has been vehement in its denial that it didn’t fire the missile, Ukraine insists the missile had been fired by the Russians. Incidentally, on Tuesday, Russia had let rained about 100 missiles on Ukraine.

Notwithstanding the facts on the ground, President Biden wants NATO and the EU to have a common position on the incident which might not be easy to achieve because of lack of consensus on the Russian action in Ukraine which has seen various shades of opinion.

Already reeling under gas and fuel shortages in the face of an advancing winter, many EU members—like Serbia, The Netherlands, and Austria—are not keen to escalate the conflict.

In a rare move, the chiefs of the CIA and the SVY—William J. Burns and Sergei Naryshkin—had met in the Turkish capital of Ankara on Monday purportedly to defuse threats of the use of nuclear weapons that the Russians have threatened to resort to.

The reported top spymasters’ meeting came in the backdrop of recent parleys between US national security adviser Jake Sullivan and senior Russian officials largely focused on limiting the ongoing war.

If indeed the incident in Poland was a Red-flag operation initiated by Ukraine, it would have as its immediate aim the declaration of Ukraine by NATO as a no-fly zone which would bar Russian planes and assets from entering Ukrainian airspace.

With Russia steadfast on flying its military assets in Ukraine, the declaration of a no-fly zone will only escalate the crisis where the US and its allies would be forced to direct confrontation with the Russians.

The final aim would be to draw in the NATO countries to take a direct role in the ongoing war.

On October 18, the UN’s Independent International Commission of Inquiry (COI) on Ukraine, while coming down heavily on Russian violation of human rights in Ukraine, had not spared the latter.

The COI found that “war crimes, violations of human rights and international humanitarian law have been committed in Ukraine since 24 February 2022. Russian armed forces are responsible for the vast majority of the violations identified.”

“Ukrainian forces have also committed international humanitarian law violations in some cases, including two incidents that qualify as war crimes,” the report pointed out.

If it is established beyond doubt that Ukraine had indeed fired the missile into Poland, it will put Ukraine in a bad light which in turn may also lead to dilution of support for its cause more so among fence-sitting countries.