What is causing the heatwaves in Europe?

19 European countries, on Wednesday, were put on extreme danger alerts for wildfires 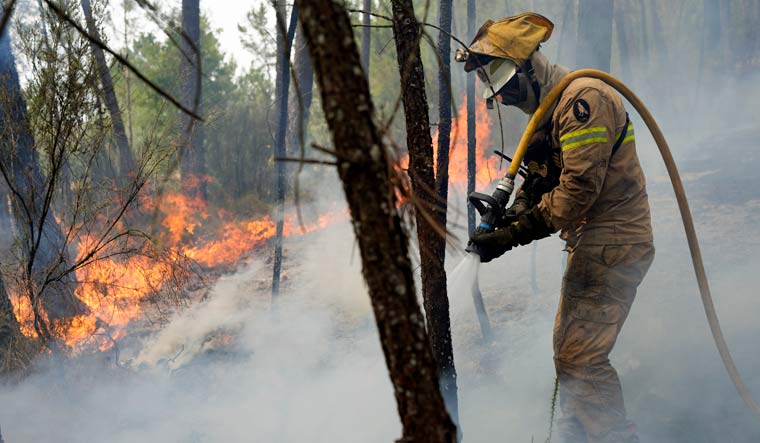 A National Republican Guard firefighter put out a forest fire in the village of Rebolo, near Ansiao central Portugal, July 14, 2022 | AP

The temperatures in Britain, on Tuesday, topped 38 degrees C. France this year recorded the hottest May. In July, Poland and other parts of Eastern Europe. Spain and Italy were blistered in a spring heatwave in June. Germany recorded its hottest day of the year on Wednesday as temperatures reached 40.9 deg C.

Five separate high-pressure weather systems across the northern hemisphere, linked by atmospheric waves, have led to unprecedented temperatures on multiple continents, CNN reported. 19 European countries, on Wednesday, were put on extreme danger alerts for wildfires. Fires broke out in parts of residential London on Tuesday.

The continent's so-called rural exodus since the second half of the last century, as Europeans moved to cities in search of a better life, has left significant areas of countryside neglected and vulnerable.

Woodland is littered with combustible material, says Johann Goldammer, head of the Global Fire Monitoring Centre, an advisory body to the United Nations.

This is why we have unprecedented wildfire risk: because never before in history say, the last 1,000 or 2,000 years has there been so much flammable material around, he said.

He adds: The landscape is getting explosive.

Carelessness with naked flames is often enough to ignite a wildfire. In Portugal, where more than 100 people died in wildfires in 2017, authorities say 62 per cent of outbreaks stem from farming activities such as burning stubble.

According to scientists, heatwaves in Europe are increasing in frequency and intensity at a faster rate than almost any other part of the planet. The concentration of CO2 has increased by 48 per cent between 1750 to 2020. Carbon dioxide is the biggest contributor to global warming. Glass in a greenhouse, CO2, methane, nitrous oxide and other gases trap the sun’s heat, causing temperatures to soar, closer to the 1.5 C mark, which will mean longer more severe heatwaves for many countries.

Another reason contributing to heatwaves in Europe is the circulation of the atmosphere and the ocean. Climate change can be attributed as one of the major causes of climate change. “I think we can very confidently say that every heatwave occurring today has been made more intense and more likely because of climate change,” Dr Friederike Otto, a senior lecturer in climate science at the UK’s Grantham Institute for Climate Change and the Environment told Euro News.

According to a study by World Weather Attribution (WWA), the heatwave which destroyed a Canadian village last summer - after a record-breaking 49.6C was followed by wildfire - was made 150 times more likely by climate change.

A region of upper-level low-pressure air has been stalled off the coast of Portugal for days causing temperatures to soar in England and Wales. Warming in the Arctic is another reason for a heatwave in Europe. Quicker warming of the Arctic can cause the temperature differential between it and the Equator to decrease, as it leads to a decrease in summertime winds causing weather systems to linger for longer. Drying of the soil due to extreme heat can be another reason for a prolonged heatwave.

--With inputs from PTI