Heat wave, flooding leave over a dozen dead in China 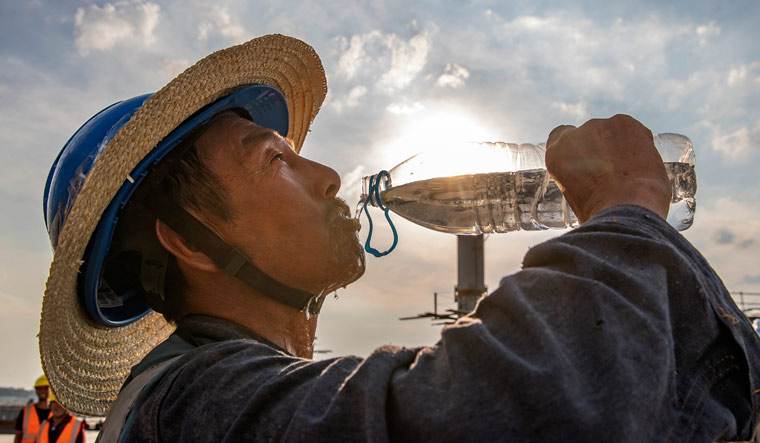 Record-high temperatures have been reported in Zhejiang province, just east of the global business hub of Shanghai, topping out above 42 degrees Celsius (107 degrees Fahrenheit) on Wednesday.

The neighbouring coastal provinces of Jiangsu and Fujian were also suffering under high heat, while Henan, Sichuan and Heilongjiang further inland saw many hospitalized for heat stroke, with an as-yet unreported number of deaths.

Floods have also struck much of the country, with three people reported killed and five missing in Sichuan province's Pingwu county as of midday Wednesday. One person was reported dead and eight missing in Heilongjiang in the northeast.

A heatwave is sweeping through China. The authorities issued the highest red alert warnings in 84 cities across the nation, urging citizens to stay cool. A red alert means temperatures are expected to reach over 40 degrees Celsius (104 Fahrenheit) in the coming 24 hours, a CNN report reads.

The red alert also meant that construction and other outdoor work is to be halted. Since record-keeping began in 1873, Shanghai has experienced temperatures above 40 deg C only for 15 days. Authorities, citing climate change, have also warned against disasters from mid-July-- the hottest and wettest time of the year.

Extreme heat led to the roof of a cafe in Chongqing province to collapse. And in Jiangxi province, part of a road arched up six inches due to intense heat. Nanjing, notorious for its searing summers, opened its underground air-raid shelters to residents since Sunday. The city issued a red alert on Tuesday, a Reuters report reads. Last month at least a million people in southern parts of China were affected by floods and landslides due to incessant rains.