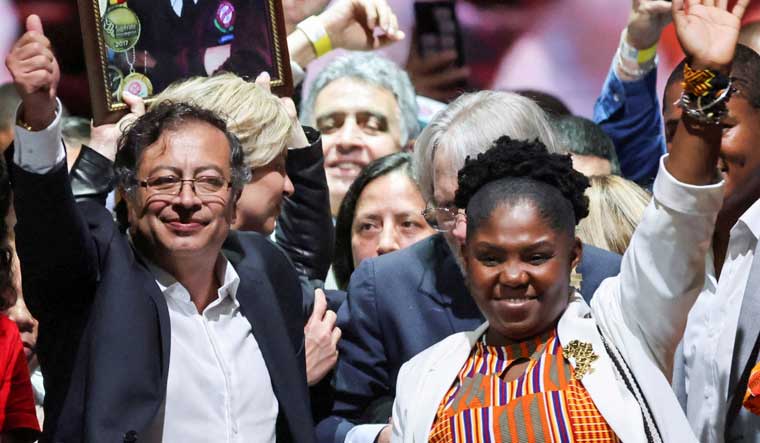 Gustavo Petro, a former rebel, became the president of Colombia, gaining over 50 per cent of votes in recent elections held in the country.  This is the first time a leftist has been voted to power in Colombia.

Petro was part of a rebel group called M-19 which got demobilised in 1990. The rebel group later became a political party and it played a significant role in rewriting Colombia’s constitution.

However, it is not just Colombia. In recently held elections, Latin American countries have voted Left, progressive governments to power indicating the rise of ‘Pink tide’ again. Gabriel Boric, a 36-year-old leftist was elected to power in Chile, Pedro Castillo, a socialist was elected in Peru and Bolivia’s socialist party won the elections in the country held in 2020. Eyes are on Brazil next were elections are scheduled later this year.

The ‘Pink tide’ is term used to refer the trend of electing left, progressive governments to power in Latin America countries. The Oxford reference defines Pink tide as ‘left‐of‐centre’, ‘left‐leaning’, and ‘radical social democratic’ governments in Latin America. The term first came into public discourse following the victory of Hugo Chávez in the Venezuelan presidential elections of 1998. Subsequently, the election of governments in Chile, Brazil, Argentina, Uruguay, Bolivia, Nicaragua, Ecuador, and Guatemala consolidated the pink tide.

The Pink tide governments are seen to be more assertive in their response to US policies. Commonly, the election of left governments in the late 90s to 2010s in Latin American countries is referred to as the first pink tide. They were preceded by conservative, authoritarian governments.

However, in stark contrast, in the second decade of the 21st century, most of the Latin American countries voted conservatives to power. The recent trend of left governments coming to power is seen as resurgence of the pink tide.

Mismanagement of Covid and economic crisis is said to be one of the reasons for the resurgence of progressive governments. Valesca Lima, Assistant Professor at Dublin University in a recent article written for ECPR’s political science blog said that recent trend was driven by mismanagement of pandemic, economic crisis and failure of right wing populism. She said that social protests and opinion polls have shown that there is an appetite for more progressive social change in Latin America. She adds that the continuance of the trend would depend on how leftists handle the pandemic and economic crisis.

However, the recently elected aren’t perceived to be hardline leftists like the leaders from the first tide. Nicolas Saldias, an analyst at the Economist Intelligence Unit told Reuters, “If elections were happening today, many of the pink governments would disappear." He told the publication that there is lack of a strong base of support.

Reuters reported that Castillo in Peru has created tensions within his own party after he swung to the center since assuming office. Boric has looked to moderate his economic agenda and criticised regional leftist authoritarian regimes.