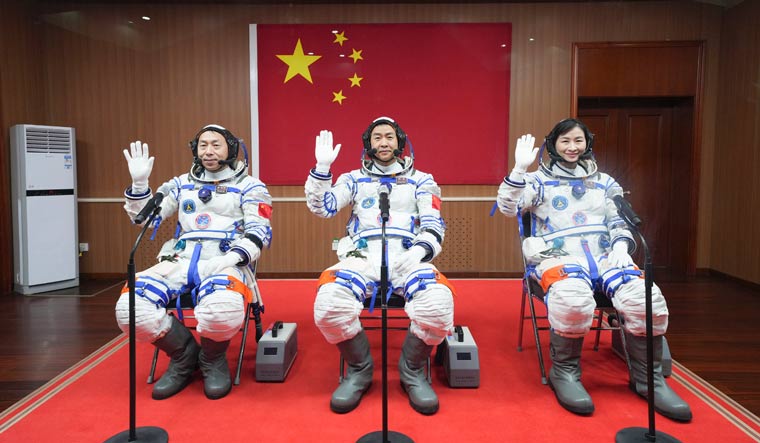 China on Sunday successfully launched three astronauts on a six-month mission to complete the construction of the country's space station currently orbiting the earth.

Minutes later, the official at the ground control declared the mission a great success, saying the spacecraft has reached its designated orbit.

The trio will cooperate with the ground team to complete the assembly and construction of the Tiangong space station, developing it from a single-module structure into a national space laboratory with three modules -- the core module, Tianhe and two lab modules -- Wentian and Mengtian. The launch was telecast live all over the country.

The mission will build the space station into a national space laboratory, Lin Xiqiang, the deputy director of the China Manned Space Agency (CMSA) announced on Saturday.

The Shenzhou-14 crew will work with the ground team to complete the rendezvous, docking and transposition of the two lab modules with the core module, Lin said at a pre-launch press conference.

They will enter the two lab modules for the first time and help make the environment suitable for their stay, he said, adding that they will unlock and install a dozen of scientific experiment cabinets in the two modules.

This is the 2nd set of six astronauts China has sent to build its space station.

Earlier, a three-member Chinese astronaut crew which included a woman returned to the earth in April after spending a record six months, building vital parts of the space station which is expected to be ready by this year.

They had completed the verification of key technologies of its space station, according to the CMSA.

Once ready, China will be the only country to own a space station. The International Space Station (ISS) of Russia is a collaborative project of several countries.

China Space Station (CSS) is also expected to be a competitor to the ISS built by Russia.

Observers say CSS may become the sole space station to remain in orbit once the ISS retires in the coming years.

In February, China unveiled an ambitious plan for its burgeoning space industry which included over 50 space launches and six manned space flights to complete the building of its space station.

The China Aerospace Science and Technology Corporation (CASC) said China will carry out more than 50 space launches in 2022, sending over 140 spacecraft into space.

Chen, who will be the commander of the new mission, participated in the Shenzhou-11 crewed spaceflight mission. Liu was part of the Shenzhou-9 mission and Cai is a newcomer to space, Lin Xiqiang, deputy director of the CMSA, said at the press conference at the Jiuquan Satellite Launch Centre.

The trio will stay in orbit for six months, Lin said.

During their stay in orbit, the Shenzhou-14 crew will witness the two lab modules, Tianzhou-5 cargo craft and Shenzhou-15 crewed spaceship dock with the core module Tianhe.

They will rotate with the Shenzhou-15 crew in orbit, and return to the Dongfeng landing site in north China's Inner Mongolia Autonomous Region in December, Lin said.

China began constructing its three-module space station in April 2021 with the launch of Tianhe - the first and biggest of the station's three modules.