The crash of Kanchenjunga in 1966 killed 117 people, including Homi Bhabha 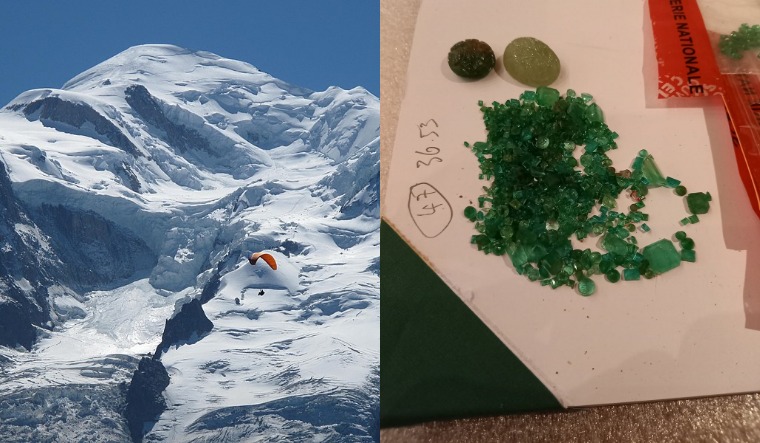 In 2013, a French mountaineer climbing Mont Blanc, the highest peak in western Europe, discovered a box with an assortment of precious stones. The gems—which included emeralds, sapphires and rubies—were valued at about $340,000.

The gems were believed to have been from the wreckage of an Air India flight, named Kanchenjunga, which crashed on Mont Blanc in 1966.

Recently, French media reported that the local government in Chamonix, where part of Mont Blanc is located, had split the gems between itself and the mountaineer.

The mountaineer had handed over the box to authorities after discovering it. The local government attempted to find the rightful owners of the gems but was unsuccessful.

Eric Fournier, the mayor of Chamonix, was quoted by reports as saying the stones had been shared in equal lots valued at $169,000 each. Fournier also praised the mountaineer for his honesty.

Some of the gems will be put on display at a museum in Chamonix when it reopens on December 19.

The mountaineer, whose identity was not revealed, had been informed last year he would be given some of the stones. He had told Le Parisien newspaper then he did not regret being honest and turning over the stones to police. He claimed he would use some of the money to renovate his apartment.

The crash of the Kanchenjunga, which was en route from Mumbai to New York, killed 117 people. On board the flight was nuclear scientist Homi Jehangir Bhabha, widely regarded as the father of India's nuclear programme. Another Air India flight, named the Malabar Princess, had crashed on Mont Blanc in 1950. Wreckage and human remains from the crash sites has been discovered in recent years due to the Bosson Glacier on Mont Blanc receding due to global warming.

In 2019, Prime Minister Narendra Modi attended the opening of a memorial in France dedicated to victims of the two Air India crashes.