‘Attacks on cultural monuments will not be tolerated’: PM Morrison 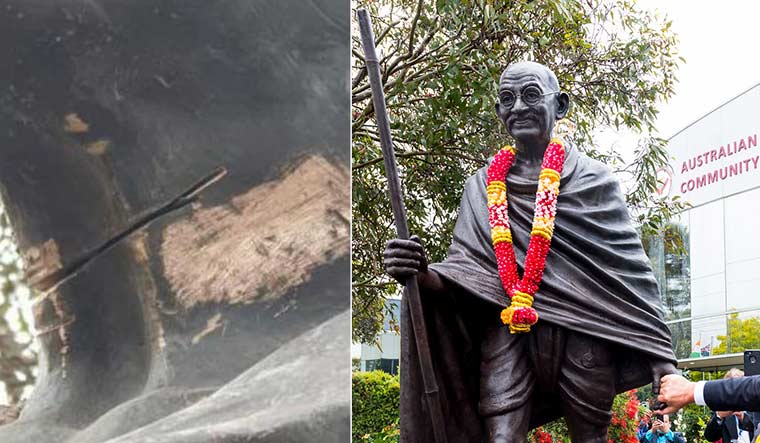 Collage: A close-up of the gash on the statue's neck, which was reportedly made with a power tool, the statue on the day of its unveiling on November 12 | Tory Woods MP Facebook, Twitter handle of the Australian Indian Community Charitable Trust

A statue of Mahatma Gandhi in Melbourne, Australia, was nearly decapitated, just a day after it was unveiled at the Australian Indian Community Centre in Rowville in the presence of Prime Minister Scott Morrison.

The life-size bronze statue was targeted by an unidentified vandal with a power tool between Friday and Saturday, Victoria Police told ABC news. It had been unveilved on November 12.

Morrison has condemned the vandalism, and said such attacks would not be tolerated.

"Australia is the most successful multicultural and immigration nation in the world and attacks on cultural monuments will not be tolerated," he said. "It is disgraceful and extremely disappointing to see this level of disrespect...Whoever is responsible for this has shown great disrespect to the Australian Indian community and should be ashamed."

The Victoria Police have appealled for witnesses to contact them.

Surya Soni, and Australian Indian community leader in Victoria, said Gandhi was a symbol of peace and non-violence, and told ABC he was appalled by the incident.

“It truly saddens us that someone would vandalise this statue within 24 hours of its unveiling. The aim of the statue was to celebrate India’s history, its 75th year of India’s independence and highlight the richness of culture across the country” read a statement by the Australian Indian Community Charitable Trust.

“It’s disappointing to see this level of disrespect of India's history displayed towards the community in the most multicultural state in Australia. Whilst Mahatma Gandhi may not be a figurehead in the wider Australian community, his history is well known among all Indians.”

Earlier this year, a statue of Gandhi in Davis, California was found beheaded.