Xi has emerged as the CPC's most powerful leader since Mao 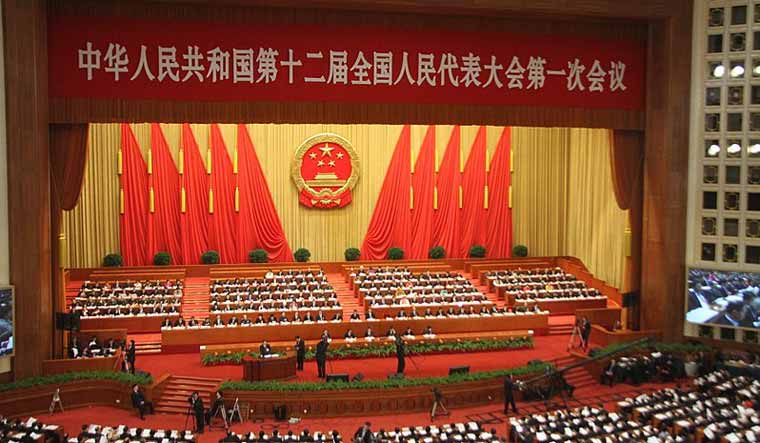 Hundreds of senior officials of the Communist Party of China (CPC) began a key four-day conclave in Beijing on Monday to deliberate and pass a rare historical resolution of the 100-year-old ruling party and pave the way for an unprecedented third term for President Xi Jinping.

Xi, the General-Secretary of the CPC Central Committee, delivered a work report on behalf of the Political Bureau and made explanations on a draft resolution on the major achievements and historical experience of the CPC's 100 years of endeavours, the report said.

Xi, 68, holds all three of China's power centres—General-Secretary of the CPC, Chairman of the powerful Central Military Commission (CMC) which is the overall high command of the military, and the Presidency of which he is set to complete his second five-year tenure next year.

Politically, the meeting is regarded as significant for Xi who—in the last nine years of his tenure in power—has emerged as the most powerful leader after party founder Mao Zedong.

Xi is widely expected to continue for a third term unlike his predecessor Hu Jintao, who retired after two terms, and perhaps may remain in power for life in view of a key constitutional amendment in 2018 which removed the two-term limit for the President.

He was also made "core leader" of the party in 2016, a status enjoyed by Mao.

The plenum is being held ahead of the next year's party Congress which was expected to appoint new leadership.

"The purpose (of this plenum) seems to be to review the party's governance in history, and to pave the way for the future leadership and their policy direction," said Gu Su, a political scientist with Nanjing University.

"It will also need to praise the achievements of the current leader, Gu told the Hong Kong-based South China Morning Post.

The in-camera meeting is being held in Beijing under tight COVID-19 control measures as the city in the last few weeks has reported several cases of coronavirus, prompting officials to tighten entry and exit controls.

Except for Xi, most of the officials including Premier Li Keqiang are expected to retire after completing the two terms.

Over the past three decades, the party has usually used the last plenary session to address party affairs, especially on key appointments, ideology and party-building matters.

Among the key issues to be watched is to see if the party continues to follow precedent on its leadership changes, especially the informal retirement age of 68 besides the two terms for its top leadership set by Party's founder Mao's successor Deng Xiaoping.

Nearly a dozen of the 25 members of the powerful Politburo will be older than 68 in October next year.

Ahead of the Plenum meeting, state media has eulogised Xi's leadership with the party's mouthpiece People's Daily carrying a front-page feature stating that the decision to make Xi the core of the leadership in 2016 and to include that in the party's Constitution the following year was a blessing for the party, the country, the people and the Chinese nation.

"Every Chinese must support (Xi as) the core. Every party member must follow him as the core, the Post quoted a People's Daily article as saying.

In its commentary profile on Xi, Xinhua said, since being elected General-Secretary of the CPC Central Committee in November 2012, "China is becoming a powerful country, and is now entering an era of strength. On the new journey, Xi is undoubtedly the core figure in charting the course of history.

An official statement said the draft resolution submitted by the Political Bureau to the meeting for deliberation has outlined CPC's remarkable achievements over the past 100 years and showcased its progress under Xi's leadership.

"China has further consolidated its international status. All these factors have provided the cause of national rejuvenation with more robust institutions, stronger material foundations, and a source of inspiration for taking greater initiative, the statement said.

Observers say that the CPC debated a document officially termed as historical resolution only twice in the 100 years' history of the party earlier.

The resolution being discussed by the Plenum on Xi's leadership will be the third in its history.

In the Chinese Communist Party's parlance, the words historic resolution carry special political significance and implications. Only twice in the party's 100-year history have the leaders adopted the so-named documents at critical junctures to resolve major issues plaguing the party, altering the course of its history, noted Chinese political commentator and columnist Wang Xiangwei said.

"The CCP is set to pass a resolution that will provide a further theoretical boost to Xi's political standing, as a previous one did for Mao, he wrote in his recent column in the South China Morning Post newspaper.

"But the document is unlikely to address one of the Chinese leadership's greatest uncertainties: leadership succession, Wang wrote.

"The wording of the document may provide a clear indication about Xi's authority and standing, Wang said.

The new resolution will come roughly one year before the party's 20th Congress, estimated to take place in the autumn of 2022, when Xi is widely expected to seek a third term as party chief, thus breaking the de facto two-term limit.

"As Xi looks set to seek a third term as China's top leader in 2022, and possibly a fourth term in 2027, it is very unlikely a potential successor will emerge next year, he said.

"Given the party's opaque politics and the sensitivity of the matter, any historic resolution on China's leadership succession plan may remain unclear for years to come, Wang said.