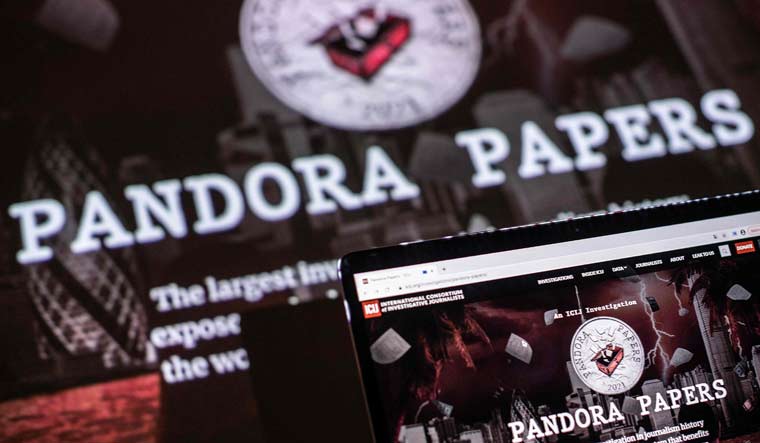 Calls grew on Monday for an end to the financial secrecy that has allowed many of the world's richest and most powerful people to hide their wealth from tax collectors. The outcry came after a report revealed the way that world leaders, billionaires and others have used shell companies and offshore accounts to keep trillions of dollars out of government treasuries over the past quarter-century, limiting the resources for helping the poor or combating climate change. The investigation, dubbed the Pandora Papers, was published on Sunday and involved 600 journalists from 150 media outlets in 117 countries. Hundreds of politicians, celebrities, religious leaders and drug dealers have used shell companies or other tactics to hide their wealth and investments in mansions, exclusive beachfront property, yachts and other assets, according to a review of nearly 12 million files obtained from 14 firms located around the world.

The Pandora Papers is all about individuals using secrecy jurisdictions, which we would call tax havens, when the goal is to evade taxes,'' said Steve Wamhoff, director of federal tax policy at the left-leaning Institute on Taxation and Economic Policy in Washington. Oxfam International, a British consortium of charities, applauded the Pandora Papers for exposing brazen examples of greed that deprived countries of tax revenue that could be used to finance programs and projects for the greater good. The latest bombshell is even more expansive, relying on data leaked from 14 different service providers doing business in 38 different jurisdictions. The document trove reveals how powerful people are able to deploy anonymous shell companies, trusts and other artifices to conceal the true owners of corrupt or illicit assets.

Legally sanctioned trusts, for example, can be subject to abuse by tax evaders and fraudsters who crave the privacy and autonomy they offer compared with traditional business entities. Shell companies, a favoured tax evasion vehicle, are often layered in complex networks that conceal the identity of the beneficial owners of assets those who ultimately control an offshore company or other asset, or benefit from it financially, while other people's names are listed on registration documents. While a beneficial owner may be required to pay taxes in the home country, it's often difficult for authorities to discover that an offshore account exists, especially if offshore governments don't cooperate. A Treasury Department agency working on new regulations for a US beneficial ownership directory has been debating whether partnerships, trusts and other business entities should be included.

Transparency advocates say they must or else criminals will devise new types of paper companies for slipping through the cracks. Pointing to the secrecy behind many of the tax dodges, some critics are calling for a global wealth registry that would make sham investments in shell companies public, embarrassing politicians or celebrities worried about their reputations.

Britain's conservative government is facing calls to tighten the country's defenses against dirty money after a massive leak of offshore data showed how London, in particular, is the destination of choice for some of the world's richest and most powerful people to conceal their cash. "The cache of almost 12 million files, which has been dubbed the Pandora Papers," was published Sunday by the International Consortium of Investigative Journalists and its media partners, including Britain's Guardian newspaper and the BBC. Though the purchases are legal under British law, the latest revelations highlight the complicated and often anonymous financial practices wealthy individuals use to avoid tax, far removed from the everyday experience of most of the British population. London in particular is a go-to for the rich and powerful because it's home to a sophisticated ecosystem of businesses that can help in the process, including creative wealth management firms, high-end lawyers and long-established accounting firms.

The London property market has for years struggled to shake off a reputation for playing a central role in how rich people around the world seek to hide and accentuate their wealth, with many prime properties in the heart of the city owned by non-nationals. Russian oligarchs have been high-profile purchasers of London properties in recent years, for example. London, one of the world's biggest financial hubs, was also prominent in previous leaks of financial data, including 2016's Panama Papers and the Paradise Papers the following year. Critics say that has been a magnet for tax avoidance, which can be legal, as well as more criminal activities, including money laundering.

Duncan Hames, policy director at the campaign group Transparency International UK, said the disclosures should act as a wake up call for the government to deliver on long-overdue measures to strengthen Britain's defenses against tax avoidance and money laundering. Once again Britain's role as an enabler of global corruption and money laundering have been exposed with the same loopholes exploited to funnel suspect wealth into the country, he added. is urging the government to close a loophole that allows companies in the U. He pointed to measures taken over the past decade by the Conservative government to improve transparency who owns what and exchange data between tax authorities. "As you've seen from the papers, it is a global problem, there's a global dimension to it and we need other countries to co-operate with us to tackle this, but we are determined to do that," he added.

Sunak also said there is always more we can do when he was asked about reports that half of all Russian money laundering is estimated to occur in the UK. The tentacles of dark money exposed by the #PandoraPapers reach into the heart of UK.